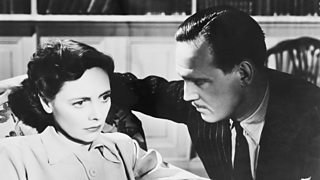 The movies were made for romance. In the early days of the medium, cinema managers sighed that “a penn’orth of dark” was the commodity most prized by many members of the audience, writes Matthew Sweet of Radio 3's Sound of Cinema.

Before the coming of the talkies, the music heard in that dark – much of it adapted from bits of the classical repertoire – was played live in the orchestra pit. That sound survived the talkies: Hollywood’s composers have kept the 19th-century romantic tradition alive into the present day.

Sometimes, though, filmmakers have taken a more direct approach – stirring the hearts of cinema-goers with music lifted straight from the concert hall. So here are six of the smartest steals.

The ultimate romantic weepie pulls a very clever trick – it invites you to cry at the stoicism of others. Noel Coward’s script is where it starts, giving Trevor Howard and Celia Johnson lines that suggest an ocean of emotion is about to break its dams. But Rachmaninov finishes us off, those gathering clouds of notes suggesting the progress of the train that will take its heroine back into the suburbs – leaving her, and the audience, to ponder what might have been.

Listen to an excerpt from Rachmaninov's Piano Concerto No.2.

Garry Marshall’s 1990 rom-com was never going to win the Simone de Beauvoir award, but we shouldn’t dismiss it: in this version of the Pygmalion story, Richard Gere’s businessman is the marble figure brought to life by love. We see Julia Roberts’s superior sensibilty at work in a scene set at a performance of La Traviata – where she responds to the music more honestly than the stuck-up people around her. “It was so good I almost peed my pants,” she declares, forcing Gere to profess that everyone misheard her. Her real words, he explains, were “it was so much better than the Pirates of Penzance.”

Listen to an excerpt from Verdi's La Traviata.

3. Berlioz: Harold in Italy (To the Wonder)

Terrence Malick’s movie is an account of a volatile relationship between a taciturn geologist (Ben Affleck) and a Ukrainian single mother (Olga Kurylenko). Malick only used a fraction of the material he shot, so the result is elliptical and impressionistic. But Berlioz’s music keeps the emotional line of the story in order. He tells us that these characters are suffering, even when the precise nature of their malaise is sometimes obscure.

Listen to an excerpt from Berlioz's Harold in Italy.

4. Bach: Various including Sonata No.3 for cello (Truly, Madly Deeply)

In Anthony Minghella’s 1990 TV movie, Juliet Stevenson’s heroine, Nina is so distraught at the death of her cellist partner that she summons him back in ghostly form. The music does the occult work. If Jamie (Alan Rickman) had been in middle-management or played the harmonica, the film could not have cast its romantic spell. Rickman’s death has given it stronger magic: which of us, on seeing it now, wouldn’t wish him back into the world?

Listen to an excerpt from Bach's Cello Sonata No.3.

Bo Widerberg’s drama builds romance between a Swedish nobleman (Thommy Berggren) and a Danish tightrope walker (Pia Degermark). He’s running away from the army; she’s running away from the circus. The andante from Mozart’s Piano Concerto No.21 is so strongly identified with the film that it’s sometimes called the Elvira Madigan Concerto. Its dreamlike melody carries the lovers away – and generates the sense of an illusion that the events of the drama will shatter.

Listen to an excerpt from Mozart's Piano Concerto No.21.

Full-blown late 19th-century Romanticism was attuned to the agonies of doomed or inadmissible desire. In Luchino Visconti’s Death in Venice, based on the novella by Thomas Mann, Dirk Bogarde is the suspiciously Mahler-like composer, Gustav Aschenbach, who becomes infatuated with a boy he sees in the Grand Hotel des Bains in Venice. The fourth and fifth symphonies convey the fatal intensity of Aschenbach’s feelings, and as he stumbles, ridiculous in his rouge and hair-dye, through the film’s final moments, it’s the music, as well as cholera and romantic yearning, that seems to kill him.

Listen to an excerpt from Mahler's Symphony No.5.