A secret history of hi-vis

You may think of them as the epitome of mundane. A garment that instantly denotes health and safety culture, needless authority, jobsworthism and a profound lack of excitement or imagination. But, as Steph McGovern discovers in the documentary Reflections on Hi-Vis, there is much more to the iconic piece of safety wear that is the hi-vis jacket than you could possibly imagine. It’s had a chequered history of rejection, acceptance and wide-ranging sociological implications. No, honestly, it really has. 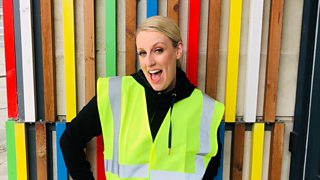 Listen to Reflections on Hi-Vis

It started with ketchup

Perhaps unsurprisingly, it was an industrial accident that led to the development of this ubiquitous protective clothing. In 1933, Bob Switzer was injured while unloading crates at a Californian Heinz Ketchup factory. The accident severely affected his eyesight, so he was required to recover in a darkened room, where his brother, a chemist, entertained him with glowing paints (these were the days before telly). Bob recognised the commercial potential of these fluorescent substances and later founded the Day-Glo Color Corp. While attempting to expand the potential use for his products, Bob dipped his wife’s wedding dress in fluorescent dye and the first hi-vis garment was born. It’s not reported how his wife felt about this.

Railway workers were not chuffed

The British relationship with hi-vis started in the early 1960s when railway workers were issued with vests while maintaining the track. But they weren’t wholeheartedly accepted. A British Rail report from the time revealed that many workers didn’t want to be seen in protective gear, as it could be viewed as slightly less manly and brave than plying their trade without recourse to fluorescence. Retired linesman Jimmy Gillies remembers older workers claiming, “I never wore one and I was never killed.” By the 1970s, hi-vis was more readily accepted, mainly as it was starting to be widely worn in the construction industry, adding a certain level of credibility. 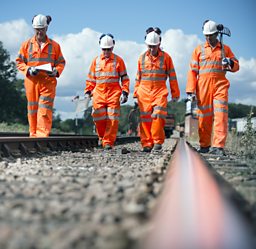 Some began seeing the jacket as a symbol of pointless authoritarianism, leading to a nation that is too readily compliant

The visibility of hi-vis began to grow and grow. But its ubiquity led to a certain level of resistance. Some began seeing the jacket as a symbol of pointless authoritarianism, leading to a nation that is too readily compliant – instantly obeying orders dished out by anyone in a shiny jerkin. Writer Rod Liddle believes the slow spread of hi-vis and its connection to officialdom has led to the British people becoming, in Rod’s words, “less arsey” and more willing to be pushed around.

The power of hi-vis

But surely we Brits wouldn’t just roll over and comply just because someone in a hi-vis jacket told us to? Performer Kerri Layton decided to put this idea to the test by donning a day-glo jacket, holding an official looking notebook and stopping traffic on a busy London street. As she furrowed her brow in concentration and took imaginary notes, the flow of traffic stopped and a long line of vehicles started to form. But not a single one beeped its horn, or even asked what she could possibly be doing. Everyone sat immobile in their cars and waited patiently for the pointless activity of the person in the hi-vis to cease.

Focus groups claim that an MP in hi-vis indicates someone getting on with the job and willing to get their hands dirty.

This power of the hi-vis has been harnessed by one particular group of people: politicians. Cabinet ministers love to throw on a hard hat and clamber inside a tasteful hi-vis jacket while touring a factory or construction site. Former Chancellor George Osborne in particular was singled out for his love of a glowing singlet. But why the obsession with protective wear? According to political photographer Stefan Rousseau, it’s down to focus groups who claim that an MP in hi-vis indicates someone getting on with the job and willing to get their hands dirty. So even if the area they’re touring requires no health and safety equipment at all, some sort of hi-vis will be sourced. 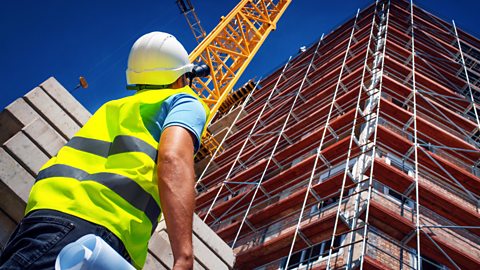 Do workers love their Hi-Vis jackets?

Steph McGovern asks the hardworking men of a construction site. 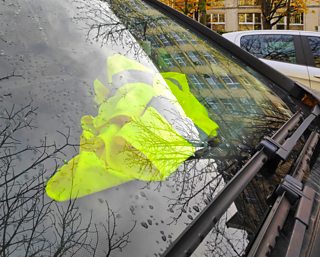 Every French car is required to carry a hi-vis jacket.

But hi-vis has been adopted by groups on both sides of the political divide. One of the largest European protest movements in recent years was the eponymous Gilets Jaunes (literally “yellow jackets”) group which started in Autumn 2018.

Originally a protest against a new fuel tax, it developed into a stand against a more general deterioration of living standards and economic disparity spreading across the whole country and leading to demonstrations of up to 1.3 million people, all wearing hi-vis as a symbol of solidarity amongst workers, which ground the nation to a halt. Every French car is required to carry a hi-vis jacket, making it the perfect, accessible emblem for government dissent.

It’s a symbol of authority, of hard work and of a wide-reaching protest movement. But hi-vis has also broke away from the building site and tentatively entered the world of fashion. For any discerning raver in the 1990s, it was entirely de rigueur to slather yourself in fluorescent protective gear, white gloves and a whistle. It reflected the happy, day-glo personality of the dance scene. And, according to one veteran raver, also helped you to sneak into festivals without paying. But hi-vis continues to fascinate the fashion world. Artist Anthony Gormley has designed a hi-vis cycling jacket.

Elements of hi-vis have been used in designs by Burberry and Calvin Klein. And recently luxury fashion house Balenciaga unveiled a fluorescent jacket that costs £2,890 a pop and looks very similar to the type of garb favoured by refuse collectors. Perhaps, in the not too distant future, it will be impossible to discern a fashionista from someone marshalling a car park.

Listen to Steph McGovern’s Reflections on Hi-Vis on BBC Sounds.