If you thought humour was all about having fun, think again. A recent episode of The Infinite Monkey Cage reveals the seriously complex role laughter plays in our lives.

Read on for nine things we learned about what makes us laugh, why we do it, and how a good guffaw can help us feel healthier, happier and more connected.

1. Humans aren’t the only mammals that laugh

Laughter is older than language, and we’re not the only mammals that have evolved to do it. Chimpanzees, orangutans and other apes all enjoy a good laugh, as do rats, who giggle when they’re tickled. 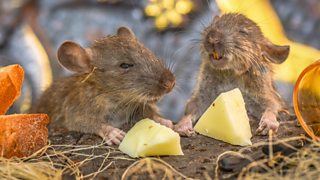 Prof Sophie Scott, director of the Institute of Cognitive Neuroscience, suggests that laughter has an important role in our development. As mammals, we have "enormous brains" and a long adolescence during which they develop. One of the things that helps our brains to grow during this phase is play, and we signal that we’re playing – and invite others to join us – through laughter.

2. Humour is a crucial part of how we communicate

Laughter is central to how we create a sense of connection with others. We use it to communicate in incredibly nuanced ways – for example, to show that we understand or agree, to diffuse tension, or to put someone else at ease. Sophie Scott says that 10 percent of the time we spend talking with friends is made up of laughing, on average. When you laugh, the other person usually laughs too. You may chuckle at things when you’re on your own, but you’re 30 times more likely to laugh when you’re with others.

3. The World's Funniest Joke... might not make you laugh

Researchers working on the University of Hertfordshire’s LaughLab project undertook a “scientific search for the world’s funniest joke”. They invited the public to submit quips online and then got people around the world to rate them. After 1.5 million ratings, they found the most popular joke was this...

“Two hunters are out in the woods when one of them collapses. He doesn't seem to be breathing and his eyes are glazed. The other guy whips out his phone and calls the emergency services. He gasps: ‘My friend is dead! What can I do?’ The operator says: ‘Calm down, I can help. First, let's make sure he's dead.’ There is a silence, then a shot is heard. Back on the phone, the guy says: ‘OK, now what?’”

If you didn’t find yourself guffawing at that story, you’re not alone. Although the joke had the broadest appeal across countries and demographics, the researchers subsequently found it received a muted response from most people they told it to.

It seems computers aren’t about to conquer the stand-up scene. The LaughLab researchers found that jokes written by artificial intelligence were universally unpopular with study participants. Here’s an example: “What kind of murderer has fibre? A cereal killer.” If you’re not rolling on the floor laughing at that one either, don’t worry – neither did anyone else. That one was ranked last in the LaughLab list. 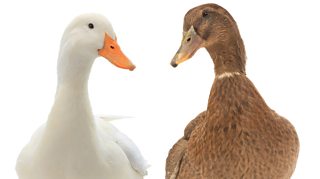 5. Laughter really could be the best medicine

Humour is good for our health. In one experiment, when patients recovering from operations were shown a funny film and allowed to give themselves as much painkiller as they needed, they used about 40 percent less than those who watched a serious film.

Telling jokes is a delicate business. On top of getting the timing and structure right, even the sounds of the words you choose can secure the success of a gag – or scupper it.

Prof Richard Wiseman, a psychologist at the University of Hertfordshire, describes how his research team tested this using farmyard noises. First, they told test subjects the following joke and measured their reaction: “Two cows are in a field. One turns to the other and says, ‘Moo’. The other one says, ‘Oh, I was going to say that.’” Next, they tested the same joke structure with different groups, swapping in a range of animals and noises to see which was funniest.

Ducks had quacked it, getting a higher laugh rate than any of the other animals. Wiseman thinks the “comedy K” sound in "quack" had something to do with it, as this is a sound that seems to elicit more laughter.

The LaughLab study also revealed that for some jokes, you can predict precisely the time between someone hearing the punchline and starting to laugh – in other words, how long it takes for them to get the joke. For this one, Richard Wiseman says, it’s three seconds: “A skeleton walks into a bar. He orders a pint of beer, and a mop.” Frank Skinner was told: "Never to go into psychoanalysis..."

8. You're more likely to find something funny if other people do

Sophie Scott describes recent research in which her team got people to listen to a comedian telling terrible jokes, and then rate them. Unsurprisingly, they didn’t find the substandard gags very funny. But when laughter was edited onto the end of the same low-quality quips and they were played to a new group, the ratings went up. What’s more, the more spontaneous the laughter sounded, the higher people rated the joke.

9. We’ve got it all wrong about comedians

Sophie Scott says there’s a popular misconception that comedians are all “very depressed and low in mood”, but this isn’t accurate. In fact, studies have shown that they’re "slightly less neurotic" than a normal group of undergraduate students. However, comedians are slightly more open than other people, and need less social approval.

Richard Wiseman says that comedians tend to be “highly intelligent, and social misfits”. They’re good lateral thinkers who can remember lots of jokes and unconsciously understand how they work, then reproduce the form.

Stand-up Frank Skinner remembers a fellow comic in the USA telling him never to go into psychoanalysis, saying it would rewire his brain in a more orthodox way and destroy his comedy. Skinner recalls, “He said to me: ‘Frank, would you rather be happy or funny?’ And I said, ‘Well... funny.’”

More from The Infinite Monkey Cage