A portrait of filming the painted bat

In March 2016, my team and I set off for northern Thailand with the task of filming a sequence about the rarely seen painted bat, (Kerivoula picta) for ‘Thailand: Earth’s Tropical Paradise.’ 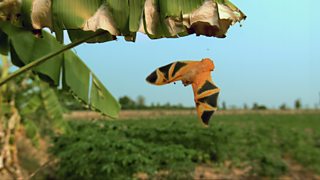 It’s the colouration of this species that makes it remarkable. Its body is covered in downy orange fur, while its wings are striped in highly-contrasting black and orange; a strikingly beautiful combination.

Capturing footage of such a "hi-vis" bat might seem relatively simple, but unfortunately the painted appearance of these bats doesn’t make them easy to find. They had never been filmed professionally before and, unlike most other species of bat, they live in isolated colonies, alone or in pairs, hidden under large, wilting leaves.

They keep to their territories, so in an area of about 13 acres, only one or two of these small bats might be found. Oh, and there’s another problem, since they move their roosts every few days, keeping track of where an individual bat might be is almost impossible.

To make things worse, we only had four days to find the bats and film the sequence. We had contacted a team of Japanese bat scientists who were not only willing to help us, but had first-hand experience of tracking down these elusive, bright orange beasts. It had taken them 16 years to locate a breeding population in Thailand, tracking them down to the northeastern region.

Known as Isaan, many forests in this area have now become farmland. Despite the painted bat’s natural habitat being ancient forest, they had adapted to these agricultural areas and it was here that we joined the scientists.

We’d been invited to their study site, a small, sleepy village called PaPo in Khon Khaen province. We were introduced to Mr Tanon, a local farmer who has been instrumental in helping protect these creatures. Without the forest trees to roost in, the bats were making their homes in the banana trees that dot the fields of sugar cane and tapioca. Mr Tanon was actively creating more roosting sites for them by regularly patrolling the banana trees and breaking their leaves. He’d also gathered together a group of locals who were keen to help us on our mission.

Twenty-four hours into our four days we still hadn’t found a painted bat. It was the dry season, with temperatures in the high 30s (°C), and the scientists decided now was a good time to tell us that numbers seemed particularly low this year.

With tension mounting, our search team split up to cover more ground. Carefully investigating leaves across acres of tapioca plantations, it was like looking for a needle in a haystack, albeit a brightly-coloured one. By the end of day two our hard work paid off. A call came in that one team had found a roosting individual. We hot-footed it to the site and got our first few shots of this magnificent bat.

Things were starting to look up – over the next few days we found more bats and the scientists, who have a license to handle them, were able to check on their health.

The bats forage over fields both day and night. Their flight is slow and fluttery in nature and that is why locals also call them the ‘butterfly bat’. Predicting the direction in which a bat would fly wasn’t going to be easy, so we used three cameras to cover multiple angles, including one that could slow down the action 80 times. 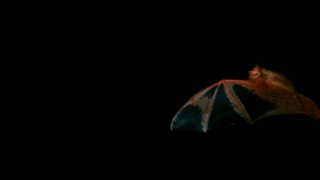 The vibrant orange fur stands out against the darkness

Our final challenge was to film the bats flying at night. For this we created an enclosure in the wild that we could light. Mr Tanon and the local villagers managed to find a couple more bats and, once the scientists had checked they weren’t breeding or with young, they collected them from the roost. This way we were able to film the bats flying with our high speed camera, their vibrant colour burning bright against the pitch-black background.

To avoid stress to the bats we were limited to a couple of attempts, so as our final night drew to a close, there was a palpable sense of relief that we had achieved our goal. We’d found and filmed the painted bats in their natural habitat, all thanks to the considerable help of the Japanese scientists and Thai villagers.

Indeed the bats’ survival in Thailand’s changing landscape relies on local people wanting to conserve them at a local level. It was their passion that helped us to film this magical-looking little animal. 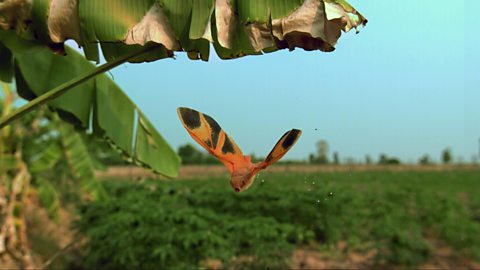 These bright orange and black striped bats are filmed in glorious slow motion.