Renowned for her beautifully clear and succinct technique, and with a formidable repertoire knowledge and understanding across all genres, Swedish-born Sofi Jeannin has established herself as one of the finest and most respected choral specialists around today. 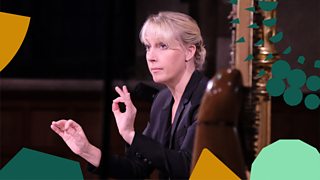 Through her work with the French Radio Chorus – the largest professional symphonic chorus in Europe – Jeannin became the collaborative conductor of choice for a number of prominent figures, including Gustavo Dudamel, Bernard Haitink, Christoph Eschenbach and Valery Gergiev, collaborating with orchestras such as l’Orchestre National de France, l’Orchestre Philharmonique de Radio France and the Los Angeles Philharmonic.

In 2008, Jeannin was appointed Music Director of la Maîtrise de Radio France – the choir famously favoured by Olivier Messiaen and Henri Dutilleux – where she continues to have the musical and pedagogical responsibility of 180 choristers. During her time with la Maîtrise, Jeannin has commissioned many new works, collaborating with composers such as Kaija Saariaho, Peter Eötvös, John Adams and Thierry Escaich, and has given regular broadcasts on France Musique. She has conducted regularly at the St Denis Festival, including repertoire such as Messiaen Trois petites liturgies, Wolfgang Amadeus Mozart Vespers and the Sinfonia Concertante with Renaud Capuçon and Adrien La Marca.

Sofi Jeannin began her tenure as Chief Conductor of the BBC Singers in September 2018. Recent performance highlights include appearances at the BBC Proms, including world premieres by Shiva Feshareki and Nico Muhly in the 2021 season; a collaboration with the Academy of Ancient Music and South Asian dance company Akademi exploring the dances of Rameau with classical and contemporary Indian dance; Francis Poulenc’s iconic choral work Figure Humaine with jazz interpolations from BBC New Generation Artist Misha Mullov-Abado, and Gabriel Fauré’s Requiem alongside music by Johann Sebastian Bach, Isabella Leonarda and Reena Esmail at Milton Court Concert Hall in London.

Committed to education and outreach work, Jeannin has worked with the chorus and orchestra of Kinshasa, Congo, and has also been involved in El Sistema, Greece since early 2017. She regularly gives workshops and masterclasses around the world.