Betting on an ice river

One story that really defined Alaska’s long wait for spring was the Nenana Ice Classic. This wasn’t a wildlife spectacle, but it was a quirky insight to life in central Alaska, and what spring means to locals. I wanted to capture the obsession with spring and the weather – I guess being British, I can relate to this, but Alaskans take it to another level! 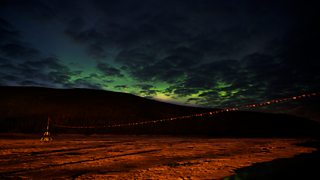 So far, the festival has a hundred years of readings on the ice thickness and day of river ice breakup that could feed into climate studies.
Jane Atkins

The Nenana Ice Classic festival each year celebrates the end of winter by getting the town together in March to build a 30 foot wooden tripod on the icy Tanana River, and then getting everyone to place bets on when the ice will break and the tripod will fall.

Hundreds of thousands of dollars are spent on bets on the river, and dozens of games are played out on the ice by the local kids and families. It was a really charming festival to film, but once the tripod was on the ice, like everyone else in Alaska, I was obsessed with the river breaking up – not to win the bet, but to film the moment!

The thing is, the breakup of this river varies hugely from year to year. Sometimes by days, sometimes by weeks! Like in the UK, we can have really mild or really cold winters; early and late springs. With no chance of having a film crew on standby for 4 weeks, we were advised by locals that the best tip off was to wait for the river upstream to break first, and then send over a camera team in a rush, as our icy river would break about 5 days later. So, as Nenana townsfolk and other Alaskans watched the icy river, I too watched it – but on a webcam in the UK. Don’t you love modern technology; there can’t be many rivers in the world with their own webcam! Anyway, for a few weeks I watched the webcam obsessively - though in truth it was like watching paint dry. Nothing happened for weeks.

Then suddenly Alaska started to warm, and on the webcam I could see ice melting on the river. And just as they said, the upstream river broke first. Quickly, we decided to send our camera crew back. Thankfully, after all that waiting, within two days of the crew arriving the river broke free of the ice, and the crew managed to film the arrival of spring in Nenana as the tripod fell. Someone won over $350,000 that day, and it wasn’t us. But it was a small victory in getting our own timing right.

This river ice festival is an interesting one to watch for other reasons too – as Alaska’s climate warms, this event is a good indicator of spring’s arrival over the years. So far, the festival has a hundred years of readings on the ice thickness and day of river ice breakup that could feed into climate studies. It’s a great piece of phenology - maybe not exactly scientific, or long enough to be definitive about anything to do with climate change, but it does make you stop and think about the seasons, and our changing world - rather than just letting the seasons pass you by. 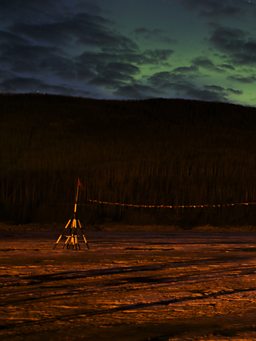