In 1985 thousands of Liverpool schoolchildren took to the streets and marched in protest against the Thatcher government’s Youth Training Scheme. Some 31 years later, this forgotten event has been recreated by Japanese conceptual artist Koki Tanaka for the Liverpool Biennial after tracking down many of the original protesters. Tanaka collides past and present in a city where unemployment and protest are always relevant and contemporary. WILLIAM COOK catches up with the artist to talk art, nostalgia and politics. 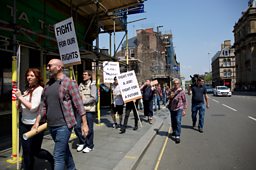 Artist Koki Tanaka’s recreation of the 1985 Youth Training Scheme Protest in Liverpool with some of the original participants for the protest. Commissioned by Liverpool Biennial. © Koki Tanaka

Back in 1985, something remarkable happened here in Liverpool: 30,000 schoolchildren went on strike, to protest against the British government’s Youth Training Scheme.

Ten thousand of these children met outside St George’s Hall, a bombastic monument to Liverpool’s imperial past, and marched through the city, ending up at Liverpool’s Pier Head. Now, 31 years later, as part of Liverpool Biennial, Japanese artist Koki Tanaka has restaged that march to create a powerful new work of art.

This wasn’t just an artwork – it was also a reunion. Some of these strikers hadn’t met for thirty years

When Koki Tanaka was asked to make an artwork for the Biennial, at first he was apprehensive: he’d never been to Liverpool; he didn’t know what to do.

He came here in search of inspiration, and in an alternative bookshop called News From Nowhere he found a book called Liverpool in the 1980s by local photographer David Sinclair. David had been on the march. He’d photographed the striking schoolkids. Koki had never heard about this protest, or anything like it. He was amazed and intrigued.

One of the things Koki found so inspiring about this march was that it seemed so joyous. These children didn’t march through Liverpool – they ran. Some of them wore Margaret Thatcher masks. The placards they carried were strident (No Cheap Labour, No Scab Labour, Say No To YTS Conscription) but the mood was upbeat. Yet when Koki went to Liverpool’s museums, to learn more, he could find no record of this march. Determined to give this historic event a higher profile, he decided to do his own research.

Koki tracked down some of those teenage marchers, and asked them to march again. His film of their restaged march is the centrepiece of this show, at Liverpool’s Open Eye Gallery, right beside the Pier Head.

This wasn’t just an artwork – it was also a reunion. Some of these strikers hadn’t met for thirty years. The show also features David Sinclair’s photos of the original march, and recent interviews with some of the strikers, now all middle aged. It’s a poignant record of a more troubled, yet more optimistic time.

In 1985, Liverpool was a city in crisis – youth unemployment was sky high. The Toxteth Riots and the Miners’ Strike had politicised young Liverpudlians.

There’s nothing nostalgic about this project. It’s not just about the 1980s – it’s about the here and now

They were deeply unhappy with the status quo, but they still felt politics could make a difference. Pamela Sullivan, who marched in 1985, when she was 15, was joined on this year’s march by her two sons, who interviewed her. The gulf between their world and hers is fascinating to behold.

‘It’s not only about the past – it’s also about the present,’ says Koki, over coffee at the Open Eye, during the instillation of his show. ‘In the beginning, the recreation of the march was the central idea of the project, but now the interviews are more important, in a way.’ When these interviewees joined the original march, as schoolchildren, they had their whole lives ahead of them. Now they’re in their forties, with teenage children of their own.

For Margaret Thatcher’s government, the Youth Training Scheme was a bold initiative to get unemployed youngsters into work. For these marchers, it was an exploitative plan to force them to do work they didn’t want to do for next to nothing. Eventually, the Conservative government backtracked on some aspects of the scheme. These strikers feel sure their protest had some effect.

And yet, in some ways, employment prospects for today’s youngsters are arguably even worse. Koki cites contemporary problems like zero hours contracts and unpaid internships. Unemployment is lower now, but back then there were no tuition fees. You could say that what these protesters feared would happen has now come to pass.

As Koki says, there’s nothing nostalgic about this project. It’s not just about the 1980s – it’s about the here and now.

Koki Tanaka is at the Open Eye Gallery, as part of the Liverpool Biennial from 09 July to 16 October. 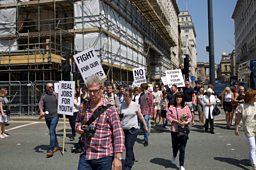 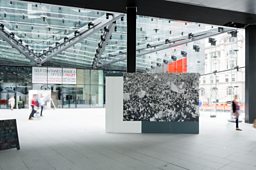 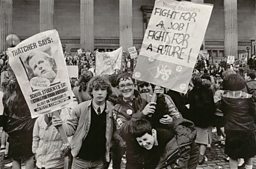 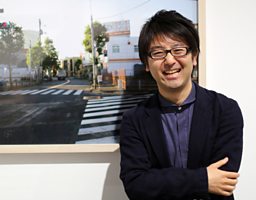 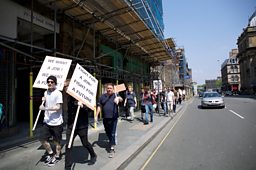 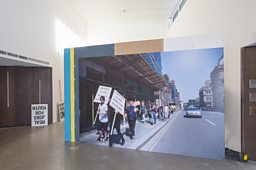 More from the Liverpool Biennial 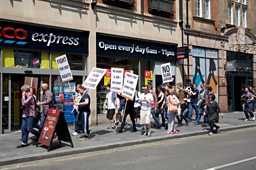