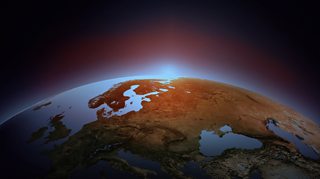 In Apocalypse How, journalist Jolyon Jenkins gets to grips with a number of complex and terrifying existential threats to the human race.

Will the demise of insects lead to the death of humankind?

Should we be worried about an electromagnetic pulse bomb and preparing our end of the world plans?

Or perhaps the apocalypse will stem from what is inside us… Here are three alternative apocalypses that might hit us from nowhere.

Are honeybees on their knees?

The "Save the Bees" campaign of 2013 saw campaigners, concerned about the effect of pesticides on the honeybee, succeed in getting neonic pesticides banned. However, Jolyon Jenkins finds out that the data wasn’t conclusive on the effect of this pesticide on our buzzing buddy. What subsequently happened was that the pyrethroid pesticides used instead allowed beatles and aphids immune to this type of pesticide to flourish and ruin cereal, sugar beer and oilseed rape crops – and kill other pollinators into the bargain.

What about other pollinators and insects?

The UK Centre for Ecology and Hydrology (UKCEH), using data from voluntary organisation, The Bees, Wasps and Ants Recording Society (BWARS), has found 57% of insect species to be stable, with 10% of species increasing, but the remaining third has them very concerned. In the US, a collection of research sites under the National Science Foundation revealed what kinds of species were doing better than others. For example, mosquitoes were on the increase while butterflies were on the decline. Aphids were prospering too, luckily the species ladybirds and birds can eat!

Should we be bugging out?

Some plants have multiple insects that can pollinate them. Conditions such as the weather or the season can reduce this amount, if you then throw in declining biodiversity, a plant may become entirely reliant on a single species and even miss out pollination altogether.

For Dr Manu Saunders, lecturer in ecology and biology, a forensic obsession with counting individual insects is missing the point. “We don’t need to prove that every single insect on earth is declining to do something about it.” She adds: “The earth is in trouble… biodiversity is in trouble and we have known this for quite a while.”

What is an EMP pulse bomb?

Created by the detonation of a nuclear bomb high up in the earth’s atmosphere, the Washington State Department of Health defines an EMP Pulse bomb as producing “a pulse of energy that creates a powerful electromagnetic field capable of short-circuiting a wide range of electronic equipment, particularly computers, satellites, radios, radar receivers and even civilian traffic lights.”

You’re unlikely to find a briefing like this from a health authority in the UK, as the threat from an EMP explosion appears to be something that uniquely troubles the US, and, as Jolyon Jenkins discovers, specifically those on the political right.

What does the EMP lobby say?

Among those who are concerned about EMP is Jonathan Hollerman, author of apocalyptic fiction and senior fellow of EMP pressure group Impact America. He believes that China, Russia and North Korea are capable of launching an EMP attack and warns that a post-EMP world would be without infrastructure. “You would have to do things you never thought you would have to do to survive,” Hollerman says.

The threat of EMP was recognised by Donald Trump when he signed an executive order on co-ordinating national resilience to it in 2019. Previous to this, an EMP Commission was set up (though it closed down in 2017 under a cloud), the secretary of which was ex-CIA officer Dr. Peter Pry. He believes that the use of an EMP could be classed as a non-nuclear attack – and therefore more easily justified - because the effect of explosion is not nuclear, it’s electromagnetic.

What really is the threat level?

Finding the arms control lobby reluctant to engage in the physics, Jolyon tries to bridge this polarised scientific debate by going to expert outside the fray.

On the way to unlocking some kind objectivity, the distinction is made between the EMP component of E1 (a nanosecond impact and ten times faster than a lightning pulse, with an electric field measuring 50,000 volts per metre), which affects control circuits, a significant issue in a hyper-connected world, and E3, which is weaker than E1 but lasting long affect transformers and cause blackouts.

This seems troubling but some research suggests that the modelling on EMP makes flawed assumptions about the conductivity of the earth, something affecting impact, to the point where no effect on transformers could occur.

“If you’ve got a limited number of things you’ve got brain space to worry about,” says Jolyon, “I’d give this one a miss.”

What’s the dilemma for biotechnology?

Biotechnology has advanced so quickly in the last five years that new and lethal viruses could be well in range of competent microbiologists. Gregory Lewis from the Institute for the Future of Humanity at Oxford University gauges the threat as “similar if not more dangerous than nuclear weapons.”

Biotechnology has advanced so quickly in the last five years that new and lethal viruses could be well in range of competent microbiologists.

While some academics shun research in this area because of the danger, other are still active in the area. In 2016, virologist David Evans and a team at the University of Alberta in Canada resurrected horsepox, a relative of smallpox, using mail-order DNA costing $100,000. Smallpox, a serious infectious disease with a 30% death rate, was eradicated in 1977 – the only disease to be totally wiped out. However, the genome has been sequenced and the code is in the public domain, so the horsepox development has raised fears that a bad actor, such as a rogue state or a biologically competent terrorist, could assemble this deadly disease – or others like it – and wreak havoc.

Can we close the door on the existential threat?

Building screening into genetic synthesis technology and predicting when DNA orders could be hazardous is, at first glance, a frustrating Catch-22. “How do you compare the sequence of an order to the sequence of a hazard without revealing what the hazard is?” asks Kevin Esvelt, biologist at Massachusetts Institute of Technology. The solution may come from cryptography, which could allow for sequences of dangerous DNA to be uploaded to a database and comparisons made without anyone being able to see the unencrypted information.

Read and Listen: powerful stories from Radio 4 in Four