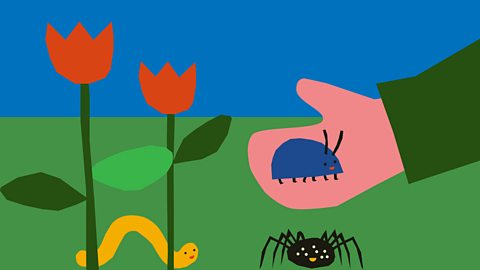 Professor Sluggo and The Prosthetic Limbs

Once there was a team of slugs training to be professors, and they were called Slugwell, Slugathon and, most hard-working and enthusiastic of all, Professor Sluggo. Well, he wasn't really a professor yet but one day he became one.

Caring Professor Sluggo thought about all the sad slugs who weren't having any fun because they couldn't walk like the other living things and they couldn't tap dance either. What should he do? Then he had an amazing idea. If he could make prosthetic legs then everyone would be happy, including himself, even though he didn't like tap dancing. If only a human could help, but who?

One day he hid in someone's garden; he didn't know whose, but he knew someone was making yummy pesto pasta from the strong smell coming from the kitchen. He slowly crawled onto a basil leaf without anyone noticing. There was a sign across the door saying Green Cottage. Then he heard a shrill scream from inside the house. 'I FORGOT THE BASIL!' said Mrs Green in a very high pitched voice as always.

The next thing that Professor Sluggo knew was that Mrs Green picked the very basil plant that Professor Sluggo was sliming (holding) onto. Once they were inside he crawled off the basil leaf, slimed along the kitchen floor and slimmered up the stairs into Mr Green's study. Professor Sluggo said, 'As slugs don't have arms and legs I need your help to make some!' Luckily Mr Green was a slug expert and could speak Slanguage (slug language).

After two years and five months they had built the huge factory and enough prosthetic legs and arms to serve all the slugs in the entire slugoverse.

After a few days of rest, they decided that they should test a pair of legs before giving them out in case they did something extremely wrong. So they sent out a letter to a random postcode, SLUG 314, that said 'To Master, Miss, Mr, and Mrs, please come to the prosthetic leg and arm factory, at SLUG 124.' Soon a family came and they introduced themselves. The mum slug was called Slugabeth, her husband was Slugginton, and they had two children, a boy called Slugoo and his sister Slugarella. Professor Sluggo asked, 'Which one of you is going to try the prosthetic legs?'

Brave little Sluggoo stood up and said, 'Me please. Me please.' in a shy quiet voice. They tried the legs on him and they worked beautifully. He felt really special to be the first slug ever to walk!

After two days they sent out the legs to everyone in the slugoverse. Then after a few weeks slugs started running around with legs and arms, and they were having so much fun. All the friends, Slugginton, Slugabeth, Slugarella, Sluggoo, Slugwell, Slugathon, Professor Sluggo, Mr Green and Mrs Green met together and had a party where they tap danced all day, and they all became professors because they were famous now.

The worms were jealous!