"Useless" art: Why did a prehistoric artist make this sculpture?

In Civilisations: Second Moment of Creation we see objects from the prehistoric period and get an incredible glimpse of a long-lost world. But from this point in history it is impossible to know for sure why these objects were made. Could recreating them today, using only the tools available at the time, offer our best hope of understanding the past? 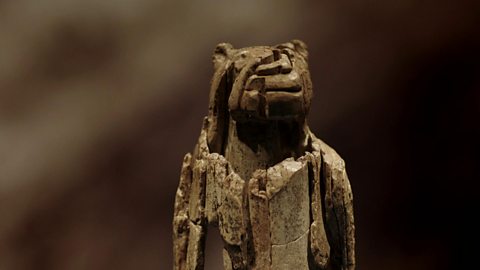 He was set free by his community only to do this piece of artwork. If you do this you can’t go hunting, you can’t go fishing, you work all day on it.
Wulf Hein

Using the techniques of prehistoric people, experimental archaeologist Wulf Hein recreated the Lion Man, a sculpture made around 40,000 years ago.

And something incredible was revealed in the process.

It wasn’t just the pain that told Hein something but the sheer amount of time required. "In the end it was about four hundred hours then I stopped counting."

This was a revelation. "A real artist made this. He was set free by his community only to do this piece of artwork. If you do this you can’t go hunting, you can’t go fishing, you work all day on it."

Jill Cook, a curator from the British Museum, says that although the object was "useless for their physical survival", that doesn't mean that it wasn’t without value.

It might have been created, she suggests, for a wider purpose. "The image was about strengthening common bonds and group awareness to overcome dangers and difficulties."

Neil MacGregor, Director of the Humboldt Forum, sees a deep significance in how the original object was handled.

He said: "There was a story told by generation after generation around their fire, so that the Lion Man's torso became smooth as he was passed between them.

These people possessed something precious, a shared story, which showed each person their deep connection to one and other."

That story is lost to us but the Lion Man offers a fascinating glimpse into the customs of an ancient world.

It was in 1939, deep inside a cave in the mountains of southwestern Germany, that archaeologist Otto Völzing found the pieces of mammoth tusk that have become known as the Löwenmensch, or Lion Man in English. 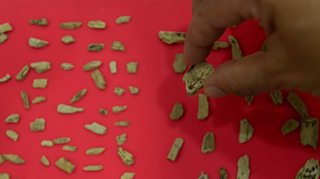 Völzing had little time to consider the significance of the small splintered pieces of mammoth tusk he’d come across. Europe was on the verge of war and he was called up into the Waffen-SS.

The pieces were stored away and would not be assembled for decades.

Völzing did not discover all of the fragments though. Archaeologist Claus-Joachim Kind returned to the site in 2008 and over the course of three years hunted out several hundred more small pieces being found. 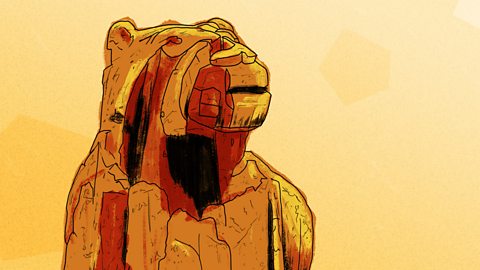 Neil MacGregor tells the story of a small ivory sculpture, carved 40,000 years ago.