Unsung heroes from across the region were honoured at our annual Community Heroes Awards for 2016 at the Gatwick Crowne Plaza Hotel. 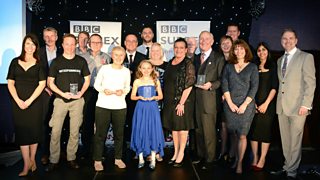 Good Neighbour of the Year went to David Duke from Burgess Hill. David, who is the chauffeur for the Mayor of Reigate and Banstead Council was enjoying a pleasure boat trip with his wife Sandra, which turned into a dramatic rescue operation, saving the life of a drowning man.

The overall winner in the Animal Welfare category is Tim Bullen, owner of The Secret Campsite, near Lewes. Tim's passionate about wildlife and making the campsite as sustainable as possible.

A posthomous award went to Joyce Avard from Hastings in the Fundraiser category, who spent 35 years of her working life as a superintendent in homes run by Dr Barnardo's and the Child Care Service. After retiring, Joyce devoted her life to providing clean water in communities in Africa.

In the Music and Arts category, the winner was the New Note Orchestra, an innovative project based in Brighton, thought to be the first 'recovery' orchestra in the world, with a mission to help people stay sober from drink and drugs.

The Young Achiever of the Year is Frances Deans from Brighton. Frances is 11 and works with the socially excluded and homeless. She spends her holidays working in the Portslade Foodbank and the weekly Street Kitchen at the clock tower.

In the Sport category, Simon Munn from Peacehaven is a wheelchair basketball star and seven-time Paralympian, who has recently returned from competing at the 2016 games in Rio de Janeiro.

In the 999 category, SERV Surrey and South London based in Epsom is a group of volunteers that has been delivering blood, plasma and other blood products for the NHS for over 30 years.

Our Volunteer of the Year is Gillian Ely from Farnham, summed up by one of the judges as the ultimate definition of a volunteer. Gill has volunteered everywhere from the Phyllis Tuckwell Hospice to helping mentally and physically disabled children in India.

Judith Shrubb from Aldershot scooped the top honour in the Carer Category. Ten years ago, Judith's husband Paul was diagnosed with Motor Neurone Disease and Judith became his primary carer. As well as caring for Paul, Judith also looks after her elderly mother.

The first Outstanding Achievement Award was presented to an unsuspecting Diana Roberts, Tourism Marketing & Development Manager for ‎Guildford Tourist Information Centre who goes more than the extra mile in promoting both Guildford and the whole of Surrey.

The second Outstanding Achievement Award went to Nigel Lewis Baker MBE from Bookham. Nigel has terminal prostate cancer but has worked relentlessly raising awareness of the condition and supporting others living with cancer and their families.

Some specially invited guests were in attendance to hand over the awards. They included the veteran entertainers Lionel Blair, Colin Blunstone and David Hamilton, Brighton and Hove Albion footballer Glenn Murray and DCC Giles York, the Chief Constable of Sussex Police.

"The Community Heroes Awards is always a fantastic celebration of unsung heroes from across the region and last night was no exception.

"This was our sixth year of these awards and the stories we heard were incredible.

"We also received more nominations than ever before so all finalists should feel extremely proud of their achievements".

The ceremony will be aired on FM/Online/DAB on Sunday 4 December at 16:00 and Tuesday 27 December 18:00. For the first time, it will also be shown on Latest TV (Brighton) on Tuesday 6 December at 4pm - Freeview 7, Virgin 159, or online at www.thelatest.co.uk.