The Zygon Invasion: The Fact File

The read through for The Zygon Invasion took place on Wednesday, 29 April, 2015. Filming started on Tuesday, 5 May and included studio shoots plus location work in Wales and Fuerteventura. 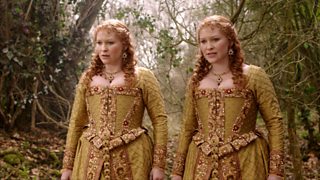 There really is a place called Truth or Consequences in Sierra County, New Mexico, USA and as Bonnie indicates, it was named after an NBC radio program in 1950. Originally called Hot Springs, the city is a popular tourist resort and is known locally as T or C. Incidentally, the country ‘Turmezistan’ is entirely fictional!

‘I snogged a Zygon once…’ The Doctor is referring to the events of The Day of the Doctor when he shared a kiss with a Zygon who had assumed the features of Queen Elizabeth I.

When Clara investigates what’s happened to Sandeep, she goes into his parents’ flat and stands in a room, believing she’s talking to the boy’s father. Just before Bonnie takes her form, a couple of visual clues eerily hint at what’s to come… We see Clara reflected in a full-length mirror, meaning that for a moment we glimpse two of her and on the wall to her right, there’s a solitary mask, indicating something that will disguise a face…

When Ingrid Oliver (Osgood) read the script for Death in Heaven she was ‘gutted’ to find her character was killed by Missy! At that point she didn’t know Steven Moffat intended her return… In fact he deliberately wrote the scene in The Day of the Doctor where Osgood and her Zygon ‘sister’ bond, intending it to be a central element of a future adventure with the shape-shifters.

Originally created by Robert Banks-Stewart, The Zygons first appeared in the Fourth Doctor adventure, Terror of the Zygons. This four-part story also featured Kate’s dad – the Brigadier. The aliens next showed up in The Day of the Doctor and The Zygon Invasion/The Zygon Inversion is their third full adventure. They were glimpsed in flashback during Logopolis and Mawdryn Undead and mentioned in several stories including Remembrance of the Daleks and more recently, The Power of Three. 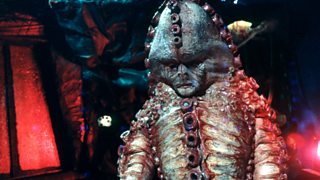 A Zygon from their first adventure, Terror of the Zygons

In the pre-title sequence we see Osgood running towards the police station in T or C… Only that isn’t Ingrid Oliver! It’s a stand in (or a run in?) who – ironically, given the nature of the episode - doubled for Ingrid on that day of the shoot!

Aidan Cook, who plays a Zygon in this story, will be a familiar name to Doctor Who fans. He’s appeared in a number of previous adventures including The Rings of Akhaten, The Time of the Doctor and The Day of the Doctor which saw his first stint as a Zygon! He was also the Crooked Man in Hide and played the titular Mummy on the Orient Express.

The red question marks Osgood mentioned were sported on the collars of the Fourth Doctor (from The Leisure Hive onwards), the Fifth and Sixth Doctors. The Seventh Doctor had the symbol in rows across a tank top very similar to the one Osgood wears at the beginning of this episode.

Steven Moffat put Osgood into the show as a ‘love letter to Doctor Who fandom’ as he’s a big fan of cosplayers. She’s not the first character to imitate the Doctor’s sartorial appearance, however. Harry Sullivan wore the Fourth Doctor’s scarf in Terror of the Zygons and Romana sported a long scarf and a very ‘Doctorish’ coat in Destiny of the Daleks. 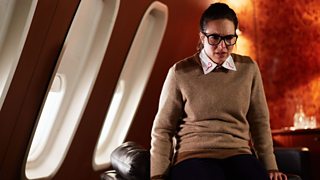 Osgood - a ‘love letter to Doctor Who fandom'

When Kate examines documentation around the cases concerning ‘Brits’ in T or C, locations on the paperwork include ‘Made Up Crescent’ and ‘Fictional Close’!

Peter Capaldi is on record as saying he ‘loved’ Bonnie and thought Jenna Coleman played her brilliantly… But more of that in the videos we’ll be releasing next week!