Introduction to The Hunt

Executive producer Alastair Fothergill on the art of predation and what he learnt making the series. 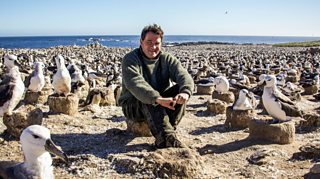 Alastair Fothergill sits beside a colony of black-browed albatross on Steeple Jason Island in the Falklands.

the kill itself isn’t interesting, because once animals have killed, the story’s over

The most exciting behaviour in the natural world is predation, but it has always been portrayed in the same way on screen: bloody teeth, marauding sharks, nature red in tooth and claw. Predators have always been perceived as impressive but aggressive animals, and in particular the kill has been the thing – in the past if you sent a crew out to film a predation sequence, the first thing that the Executive Producer would ask the director is, ‘Did you get the kill?’

Yet actually the kill itself isn’t interesting, because once animals have killed, the story’s over. What is interesting is the build up, the strategies adopted by both the predators and prey. This has never been looked at in detail, and that is the aim of The Hunt.

In my previous series Blue Planet, Planet Earth and Frozen Planet, we have looked at habitats, attempting to give the viewer a sense of place or landscape. The Hunt is about a behaviour – predation – but if you think of the challenges that predators and prey face, they’re absolutely related to their habitat. And so in The Hunt we have tried to mix the epic landscape photography and sense of environment that people loved in Planet Earth and in Frozen Planet with the best and the most exciting behaviour in the natural world.

One other thing that has emerged through filming the series that has excited me – and I hadn’t predicted would happen – is that we’ve found we have been able to put the audience right in amongst the animals. A lot of wildlife photography is dominated by technology – there’s a whole school of wildlife films about using the camera and where that camera is. I personally am not interested in that because I don’t want the cameras to get between the audience, the animals and the experience.

Instead, what we’ve tried to achieve is a sense of being right alongside them as they hunt or are hunted. We have put gyro-stabilised cameras on elephants, four wheel drives and helicopters so that we have been able to film whole sequences from several different angles with the camera always moving, keeping us up with the hunt, right in the thick of it yet not disturbing the animals.

in the hunt, the outcome is never certain.

What I hope will become apparent is this: predators usually fail. People don’t realise how hard it is. We want the audience to engage in this real-life drama. I hope they will come away thinking that predators and their prey are all amazing, hard-working animals, exquisitely beautiful, perfectly evolved, trying to solve life-or-death problems, taking on momentous tasks. There are no heroes or villains. The point is, you never know if they will succeed: in the hunt, the outcome is never certain.