When you close your eyes and think of Britain what springs to mind? Thatched villages? Seaside towns or cities? Flying over patchwork of fields and hedgerow to the strains of Elgar? Do you think of your garden? Wherever your imagination takes you I’m guessing you’re above ground.

But our familiar British sights and sounds are only half the story. Like oil on water we are on the surface of another less familiar landscape. We’re standing on a line that separates us from the subterranean realm beneath. Two landscapes connected, interdependent, yet destined never to mix.

In the two Britain Beneath Your Feet programmes, we wanted to peel back the ground to reveal not just the inner, hidden, underground workings that make Britain tick, but the surprising things too: down here myths and legends flourish; stories run riot, unchecked.

As we make the series, threading our way underground through vast foundations and the underground rail networks, through the jungle of tree roots and cables, we found such a place: London’s lost River Fleet, once a tributary that ran through the city from the genteel Hampstead Heath ladies bathing pond to the mighty Thames, now relegated to an underground sewer emerging inauspiciously from a disappointing steel grate just under Blackfriars Bridge.

The lost River Fleet is also home to the mythical ‘Fatberg’ — a modern urban phenomenon we’re all reminded about at Christmas time when we’re told not to pour the turkey fat down the sink.

“There’s a real monster down there”, according to my new friends at Thames Water. They need my help. So, like a Victorian adventurer from an Edgar Rice Burrow’s novel or Orpheus descending to the underworld, I don the required outfit, sign the required health & safety forms, break the surface tension, and descend into the blackness through a manhole ironically outside one of London’s swankiest hotels.

The crew had just spotted Beyoncé, no less, oblivious to Thames Water vs The Fatberg now in full swing in the middle of the road and holding up the traffic. Our mission was to seek and destroy this giant lump of congealed cooking fat born from a million homes & restaurants across the capital that was now floating in a clogged up river of human waste and other unmentionables. 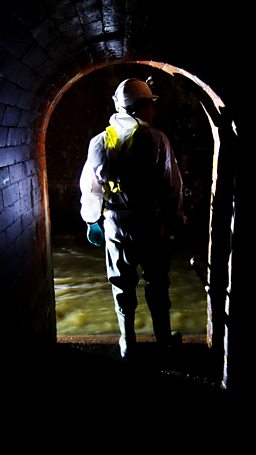 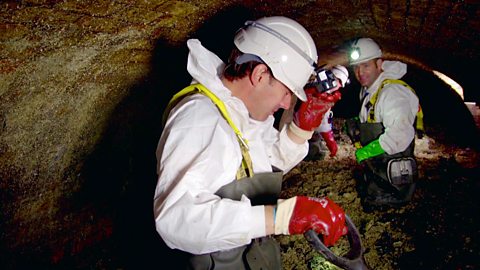 How do you remove the fat that blocks London's sewers?

Dallas Campbell and a team from Thames Water use shovels to destroy the fatbergs.

Down here is what ‘out of sight, out of mind’ actually looks like. 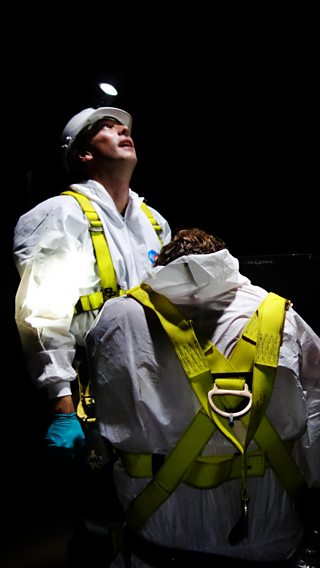 Armed with nothing but an old spade, I waded off in search of adventure. The stench was truly unbearable. I’d had some experience of this in an open Mexican sewer a couple of years ago on another programme and felt prepared, but for some reason the smell here was on another level. I seemed to have carved a niche as the BBC’s go-to human sewer cleaning guy!

My feet, I noticed, felt suspiciously wet — from sweat, I hoped, rather than the putrid sludge that was perilously close to the top of my waders.

Before I could beat a hasty retreat and leave it to the professionals – in that way that television presenters like to do – I came face to face with the fatberg. It was indeed a behemoth, sitting there like Jabba The Hut — and about the same size. I took up my spade and battle commenced, hacking and chopping relentlessly to break the thing up and get the River Fleet flowing again. I landed the final death blow, roaring triumphantly (I didn’t really roar) like St. George slaying the dragon. The fatberg was vanquished.

But worse was to come

Back on dry land came perhaps the worst job of all: the hugely laborious, time consuming and technical task of cleaning lots of expensive camera gear and trying to remove all your clothes without getting human excrement all over you.

Tripods were scrubbed; disinfectant was liberally sprayed; protective overalls were disposed of; lens caps were lost then found again; rubber gloves were re-applied; the tripod was scrubbed again...

I popped over the road away from the cleaning chaos to ask the friendly hotel doorman if I could use the bathroom. I’d only be a second. He took one look at me and point blank refused.

The door behind him opened and out walked film star J.K. Simmons. To be fair, I wouldn’t have let me in either!

Two worlds had collided. The words of Oscar Wilde sprang to mind:-

“We are all in the gutter, but some of us are looking at the stars.”