The question of where birds went in the winter puzzled people for centuries, but we now know more than ever about their migration. As In Our Time explores how even tiny songbirds are able to travel thousands of miles to warmer climes each year, here are some fascinating revelations from the programme.

1. The ancient Greeks thought birds turned into fish over the winter

Past societies developed a range of weird and wonderful explanations for birds’ annual disappearance. Some thought they became barnacles, others that they hibernated in cliffs. As recently as the late 19th century it was believed that birds lived in mud at the bottom of ponds for part of the year. 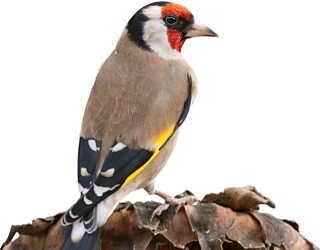 Goldfinches are stunning examples of the finch family native to Europe, North Africa and western Asia. In winter a significant number of UK native goldfinches migrate to southern Europe.

2. In 1822, a stork arrived in Germany with an African spear through its body

This was the first strong indication that birds spent their winters in other parts of the globe, and there are reports of around 25 similar cases since.

There are reports from the early 1700s onwards describing strange changes in caged birds’ activities around the time of wild bird migration. Captive birds have been observed to put on weight, grow restless, become much more active at night, and scratch against the same side of their cages repeatedly.

4. A bird’s first migration is very risky, but those that survive may live longer

Travelling long distances carries great dangers, including new environments, pathogens and predators. Adolescent birds are thought to be at the highest risk, with one study suggesting that over 80% of songbird deaths involve young migrating birds.

There’s evidence that birds which survive their first migration tend to live longer than those which don’t migrate. A tiny 10g warbler can travel back and forth across the world for ten or twelve years.

A waxwing in Cumbria, north-west England. The bird, which is marginally smaller than a starling, visits the UK throughout winter, typically between October and March. It has a striking crest, smooth and silky grey/brown plumage and unusual red tips at the end of some of its feathers.

5. Birds carry a kind of internal clock that prepares their bodies for travel

Almost like athletes, birds begin physically preparing for migration well in advance of the journey. They start to eat more and gain weight, their liver and reproductive organs often shrink, and their cell membranes change to enable oxygen and fat to be used more efficiently. Some birds renew their flight feathers, which can take up to a month.

6. Migrating birds can be divided into “calendar birds” and “weather birds”

We don’t know exactly what makes birds migrate when they do. Some birds set out at exactly the same time each year, whereas the departure times of others are based on the weather.

In Borneo, the annual arrival of the brown shrike is so consistent that farmers used to rely on it to know when to plant their crops.

7. The migration route of many birds is etched into their genes

Although a lot of large birds – such as swans and geese – follow more experienced relatives, many smaller birds make their first migration without a guide. It’s thought they inherit a kind of internal compass that tells them where to go.

When scientists crossbred birds with different migratory routes, the offspring followed a path halfway between those of their parents.

8. Birds can return to a specific place year-on-year – even to the same twig!

First-time migrants will only have a rough idea of when they’ve arrived in the right area, based on temperature, light and food availability. But on subsequent journeys they return to the exact same place. Scientists still don’t fully understand how this precise navigational memory works.

A flock of starlings in Suffolk. The starling does not typically migrate from Britain. However, starlings from eastern Europe migrate to the British Isles in search of food.

9. Just because some birds in a species migrate, it doesn’t mean they all do

For example, studies show that older lesser black-backed gulls are less likely to migrate than younger gulls, but it’s not clear why. It may be that competition for food forces some birds to travel further afield while more dominant ones stay at home, or that larger birds are able to survive by fasting during the winter.

10. A bird that weighs as little a bag of crisps flies 15,000km around the world

A small songbird – the northern wheatear – migrates from Alaska to sub-Saharan Africa and back again each year.

Northern wheatears in Canada migrate in the opposite direction to their Alaskan counterparts, following a route that is half as far but much more risky. The Canadian birds fly most of the way to sub-Saharan Africa non-stop over the open ocean.

12. If they lose their sense of smell, birds can no longer navigate

Research into homing pigeons shows that without their sense of smell, they stop being able to find their way back to their home loft. Recent experiments have suggested that this is the same for migratory birds too.

13. Birds use the Earth’s magnetic field to help them find their way

They can’t tell the difference between north and south, but birds are able to distinguish between whether they’re heading for a pole or the equator.

In theory, birds can also use the earth’s magnetic field to tell them where they are, but this is less certain.

Melvyn Bragg and guests discuss why some birds migrate and others do not, how they select their destinations and how they navigate the great distances, often over oceans. 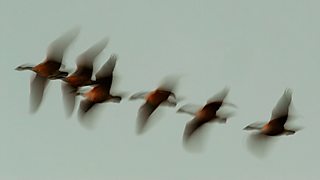 In Our Time: Bird Migration