Our lives are governed by time. But the idea of accurate time pieces being worn on the wrist, let alone on a screen in your pocket, wasn’t even a pipe-dream in Shakespeare’s era, it was unknown and to many incomprehensible. Yet Shakespeare was fascinated by time – why else would he set one of his most popular plays, A Midsummer Night’s Dream, on the shortest night?

The Bard was the first playwright to include frequent references to clock time in his work. Indeed, the phrase ‘watch the clock’ first appears in Sonnet 57. His work is also full of the most wonderful poetic and insightful references to time itself and its relationship to our mortal span. We asked University of Oxford Professor of Early Modern Drama and Shakespeare expert Tiffany Stern to put the Bard’s time into perspective.

In Shakespeare’s day there were three ways of measuring time: hourglasses, sundials and clocks. Shakespeare, who refers to each, seems to have thought of time differently depending on the instrument he imagined measuring it. 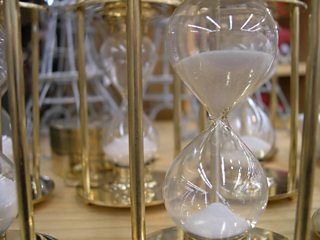 Sometimes Shakespeare writes of time in terms of an hourglass: an instrument made from two conical glass bulbs joined at the middle and filled with ‘sand’ – actually, iron filings, powdered eggshell or marble dust.

When, in Pericles, Gower the narrator says ‘our sands are almost run’ (5.2.1), he means the sand in the hourglass has almost run through, and that the play is almost over.

These days when we talk about ‘running out of time’, we are still using the vocabulary of the hourglass in which time always appears to be hurrying.

Sometimes Shakespeare thinks of time as it appears on a sundial: a plate marked with the hours onto which a pointer cast a shadow when the sun shone.

On a sundial, time was relayed from the sky – perhaps from God itself.

It was, however, only revealed when the sun shone, and only visible through shadows; so when Shakespeare remarks that ‘Thou by thy dial’s shady stealth may’st know, / Time’s thievish progress to eternity’ (Sonnet 77) he is writing about secretive sundial time. 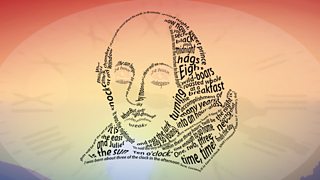 Every hour on the longest day of Shakespeare's 400th anniversary year was marked by @BBCShakespeare and our partners at the British Council, Shakespeare's Globe, The RSC, BFI, the Royal Opera House and Hay Festival.

It included great film and video clips with famous performers past and present, rare stills, a range of specially created GIFs and a wealth of wonderful Shakespearean material – surprising, fascinating and fun to share.

24 Hours of Shakespeare through time - follow the whole journey

Shakespeare’s description of a clock is of an instrument always ‘a-repairing, ever out of frame, / And never going aright’ (Love’s Labour’s Lost, 3.1.190-91). 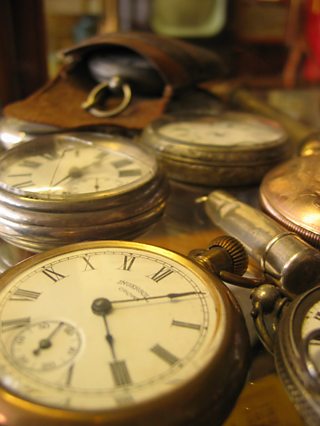 Notoriously inaccurate in Shakespeare’s period, clocks weren’t to improve until 1656 when Christiaan Huygens invented the pendulum regulator to stop them going too fast or too slow.

Clocks did, however, determine how city people ran their days.

The word ‘clock’ means ‘bell’ originally, and public clocks would ring out the hour from their location in church towers and could be heard from far away.

As people needed a shared time by which to make their arrangements, it was normal to live by the time supplied by the nearest public clock and to state the source of your time – in case your friend was living to a different clock.

In I Henry IV Falstaff pretends to have fought ‘a long hour by Shrewsbury clock’ (5.4.145): he means that he impressively fought for a time that seemed long even by a notoriously ‘long’ (slow’) clock.

Whenever a clock struck the hour, the listeners would ‘tell’ (meaning ‘count’) the strokes; the origin of the phrase ‘tell the time’.

This enables Shakespeare to introduce the motif of time into the play, and also to show fictional duration: we are to understand that what has happened swiftly on stage has lasted three fictional hours.

As all three instruments of time attest, life in Shakespeare’s day was run by the hour, because minutes were not visible on hourglasses and sundials and were not even marked on clocks (clocks were not regularly to have minute hands until the eighteenth century). 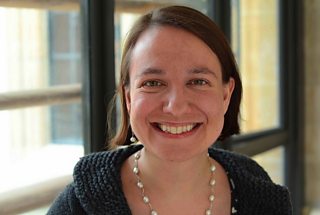 So though Shakespeare knew that an hour consisted of sixty minutes – his sixtieth sonnet, is about minutes – he did not have a clear sense of how long a minute was.

‘Minute’ means, of course, minute, and when Shakespeare writes ‘Now at the latest [last] minute of the hour / Grant us your loves’ (Love’s Labour’s Lost, 5.2.782-3), he may be imagining that a minute is like a second.

Only once does Shakespeare write about a period of time that is made up of minutes rather than units of an hour (like the quarter and half hour bars shown on some clocks).

Puck in A Midsummer Night’s Dream claims that he will ‘put a girdle about the earth in forty minutes’ (2.1.175-6). The joke here is that forty minutes is fairy time. No instrument can show it.

Time varied, then, for Shakespeare, depending on which method he imagined measuring it. But because hourglasses suggested death (time could ‘run out’ in an hourglass); sundials suggested stealth (time, a dark shadow, crept over the sundial); and clocks suggested eternity (the hour hand went round in a continual circle on a clock); Shakespeare may have preferred ‘watching the clock’ to any other instrument. Let’s join Shakespeare and spend Midsummer’s day with him, doing just that! 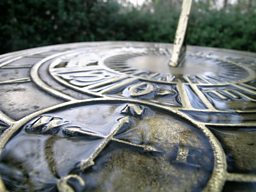 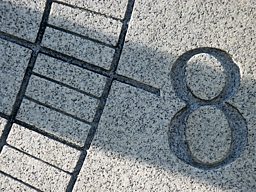