At the start of the 20th century the computer and the aeroplane were still the stuff of dreams. By the year 2000 the whole world was connected by low cost flights and the internet. In between, space travel, television, mobile phones, keyhole surgery and microwave ovens had moved from the pages of science fiction into our everyday lives (though we’re still waiting for those jet packs…) It was a pace of scientific discovery and progress that would have astounded the great innovators of the 19th century.

Driving this quest for knowledge in the 20th century was a visionary community of scientists. Our four were not just highly skilled, intelligent people; they were all dreamers… ones who dared to imagine a different sort of future.

Initially refused a scientific education as a woman, Marie Curie’s research illuminated radiation for the world

I was taught that the way of progress was neither swift nor easy.

1. As a woman she was forced to study in secret

Though a top student at school, Curie was not allowed to attend the men-only University of Warsaw in her hometown; nor was there an alternative place for women to learn. Instead she managed to continue her education through a series of secret, informal classes before moving to Paris. Even now she remains just one of three women to win the Nobel Prize for physics.

2. She joined the dots

After Wilhelm Roentgen discovered X-Rays in 1895 and Henri Becquerel realised elements like uranium also gave off rays a few months later, Curie made the link and coined the term ‘radioactivity’. Her research with her husband Pierre led to the discovery of two previously unknown elements: polonium and radium.

3. She overcame both personal and global tragedy

In 1906 Pierre Curie was killed in a traffic accident, leading Marie to continue their research. She took over his teaching post at Paris’ Sorbonne University and in 1914 founded the Radium Institute to find medical applications for radioactivity. An early effort came during the First World War, when Curie bought and operated portable X-ray machines to help treat wounded soldiers on the frontline. Such was Curie’s commitment to her research that her death in 1934 of aplastic anaemia was caused by exposure to radiation.

With ideas – and some hardcore maths – Albert Einstein transformed humanity’s understanding of the cosmos.

Life is like riding a bicycle. To keep your balance you must keep moving.

1. He explored the universe without leaving his room

Einstein pioneered theoretical physics through a series of 'thought experiments' that relied on imagination, inspiration and a lot of very complicated maths. Without lab work, he was able to come up with a series of new concepts about how the universe works. These included black holes and his theories of relativity. Practical experiments and some very big telescopes have subsequently proved his key theories right.

2. He made equations sexy

Well one perhaps. Einstein’s E = mc2 is the most recognisable equation in the world, adorning t-shirts, posters and even song lyrics. The formula states the mind boggling concept that energy and mass are the same physical entity, and can be changed into one another. It opened up a whole new way of understanding the universe – and that wasn’t even the work that earned Einstein the Nobel prize for physics in 1921.

3. He gave science a conscience

With discoveries and technological leaps transforming the world in the 20th century, Einstein was vocal about science’s moral responsibility to humanity. Urging peace, he wrote not just on physics, but many other aspects of society. This work earnt him a reputation as the “conscience of the world” – a scientist aware that scientific work had an impact on lives far beyond the lab.

Those who can imagine anything, can create the impossible.

1. He invented the computer – and stops you getting spammed

Turing’s mathematical genius allowed him to foresee the possibility and function of computer like machines before the existence of the necessary technology. Laying out the theory for such devices in an essay in 1936, his revolutionary work provided the foundation for modern computers. He later came-up with the ‘Turing test’ to determine whether a machine is intelligent – or not. The principles of it are reversed online today, when a computers sets you a CAPTCHA test (like distorted letters) to prove you’re a human and not a rogue bot!

2. His machines helped win a war

At the start of World War Two Turing, along with other mathematicians, was recruited to break enemy codes. Working at Bletchley Park, Turing built a machine called a Bombe. It sped-up code-cracking efforts from weeks to hours by trying multiple permutations. The information gleaned helped the Allies gain an upper hand in the war.

3. His legacy has helped change social attitudes in Britain

Turing was a gay man at a time when homosexuality was illegal. Despite his wartime contribution he was arrested for gross indecency in 1952 and given a stark choice between prison and chemical castration (opting for the latter). The arrest also lost him his security clearance and two years later Turing died of cyanide poisoning – whether it was suicide or not is still debated. A campaign to grant him a pardon, fittingly started by e-petition, resulted in him being granted one posthumously in 2013. A subsequent legal amendment dubbed Turing’s Law pardoned 65,000 other people convicted of the same ‘crimes’.

Inspired by ancient books, Chinese chemist Tu Youyou discovered a new treatment for malaria, which has helped save lives globally.

Every scientist dreams of doing something that can help the world.

1. She was a scientist at a risky time in Chinese history

Tu trained as a scientist in communist China, however by the 1960s the profession was a dangerous job in the centralist state. Officials mistrusted intellectuals and scientists, executing, imprisoning or punishing many of them in 're-education camps'. Many research programmes were stopped and Tu’s own husband, an engineer, was detained. Tu herself was recruited for one of the few scientific projects going – a secret military one to find an antimalarial. She felt huge pressure and as an enforced ‘single mum’ Tu had to send her two young daughters away in order to continue her research.

2. She looked back as well as forward

As part of the programme charged with finding a treatment for malaria, Tu was inspired by an ancient Chinese text which said sweet wormwood was used to tackle intermittent fevers (a hallmark of malaria) around 400 AD. In the herb Tu discovered a compound, now known as artemisinin, which proved an effective treatment for the infection. Tu herself volunteered to be the first human recipient.

3. She saw her work cross a divided world

For many years China’s new treatment for malaria was confined to the East. Gradually, as global politics changed, and Communist countries and democracies became more willing to share knowledge, news of her discovery eventually filtered out of China. Western drug companies began mass production. With half the world’s population at risk from malaria, Tu and artemisinin’s vast impact cannot be underestimated. As her Nobel Prize summary states her work has “led to the survival and improved health of millions of people.”

Four scientists. Four extraordinary achievements. But only one can be the most iconic scientist of the 20th century. The decision is yours.

Watch: Scientists of the 20th Century 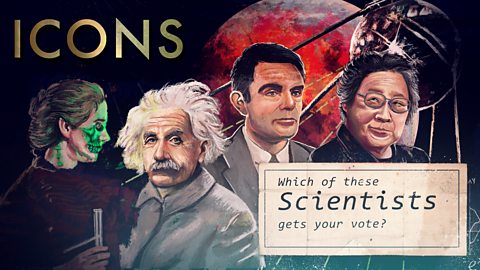 Scientists of the 20th Century

Four geniuses, four dreamers, four scientists... Which one gets your vote?