I looked straight into the eyes of something you would not expect in a forest: some 300 pounds of NZ sea lion female!

New Zealand's nature and wild landscapes always had this magic spell on me. Isolated islands that developed oddities in wildlife with amazingly twisted behaviour you would not expect.

It all started out on a day so calm I could hear the last shower's drops fall onto the forest floor. Headed by a Department of Conservation Ranger, we carefully made way in the breath-taking coastal forest on New Zealand's South Island, ducking through the evergreen gnarly-grown Karaka karaka trees with their parachuting canopy. Next to a small trail, something large and sand-coloured rose up. I looked straight into the eyes of something you would not expect in a forest: some 300 pounds of NZ sea lion female! High and dry on land – this is the utterly-nutty New Zealand!

From behind the big mammal's chest, a velvety brown pup made its appearance, flopping clumsily forward on its flippers to look at us new arrivals.

I sat down. Sea lion mum blinked at me and put her head down again to rest. I slowly set up my camera gear. The pup was in a playful mood, circling and trying to engage its sleepy mother with little puffs.

Having given birth to a child myself just some months before the beginning of my filming for New Zealand, I knew this was one hell of an exhausted sea lion mum. The pup was born only a few days earlier, and she had not been back to sea to eat since then. Little did I know that this family duo was to allow me to film them for several weeks while the pup was growing up.

New Zealand sea lions (previously knows as Hooker’s Sea lions) have only recently returned to the South Island. A lone female turned up and stayed to breed around 25 years ago after having been extinct by human hunting. Now there is a small breeding population. They’re a remarkable modern-day conservation success story, helped by conservation efforts and scientific research.

...we both felt that the mother had deliberately approached us to check out if we would qualify as babysitters

Each year, pregnant mothers search shelter in the safety of the hinterland, to give birth, nurse and raise the pup for several weeks in the forest. It is mostly a defensive strategy to protect their infants from bullying, testosterone-pumped male sea lions that patrol the haul-out beaches and could injure the offspring and stress the mother.

We had set out to film the struggle of a sea lion mum to raise her pup, and the daily epic hike from sea to wooded dell to re-unite with her young.

Until now, the family had been together under the same tree. But on one morning, the mum rose and walked with determination a few meters down a small trail, right towards my camera and me. I held my breath for a moment. Was she threatening me?

I had filmed sea lion biting fights and knew of course about the power of territorial defense. However, I decided to shrink down in submissive humbleness behind my camera. She came so close, that I could feel her breath and she sniffed at the lens as she passed.

She then turned around and continued down the trail seawards without turning back. In the meantime, her little pup tried to follow a few metres but it soon tired and returned to their hiding spot. After calling softly, with apparent confusion, it then put its head down on the ground with a big sigh.

The camera-assistant and I looked at each other in amazement: we both felt that the mother had deliberately approached us to check out if we would qualify as babysitters while she took her chance to return to the sea for the first time. It seemed she’d decided to leave us practically holding her baby!

Over the next few weeks in its mum's absence we saw the pup grow bolder and expand its home range in the coastal woods, I felt incredibly humble to get such an intimate insight into a young animal's life and watch it develop and explore.

In parallel, when I would get home after sunset or in our mid-day-bad-light breaks, I was treated to see the natural wonders of my own infant grow at an explosive rate. My husband would tell me about his day with our child, and I talked about the little sea lion. Taking my little family to New Zealand during our very ambitious production period for this series felt like a true adventure. 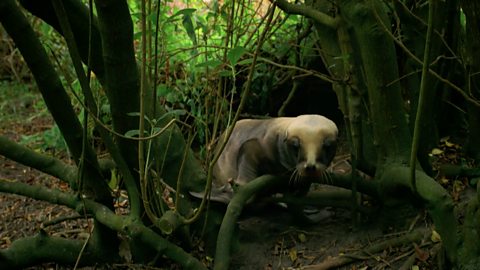 Sea lion mother hides her baby in the woods

To avoid the ruckus on the beach this sea lion mother heads for a woodland sanctuary.