Seven of the most outrageous bands ever

Sometimes they’re driven by a lust for fame. Sometimes by an undefined adherence to some artistic cause. And sometimes, there’s absolutely no explanation whatsoever. Musical acts have often engaged in bizarre, baffling, brain-bending behaviours for reasons that aren’t always clear. To celebrate the new KLF comedy-drama How To Burn a Million Quid, here are just a few bands whose antics have confounded their fans, the critics and the rest of the world...

How To Burn A Million Quid

Listen to the outrageous comedy drama telling the true story of chart-topping agents of chaos, the KLF.

As the title of the Radio 4 series suggests, this multi-named, archly provocative outfit did indeed set fire to their profits in 1994 and then promised not to speak about it for 23 years. Perhaps the most surprising thing is, this isn’t even the most bizarre thing the band did.

KLF fired a machine gun into the crowd at the Brits.

Part conceptual artists, part music charlatans, and entirely influenced by the bonkers fictional 1970s sci-fi book the Illuminatus! Trilogy, the KLF AKA The Justified Ancients of Mu Mu AKA The Timelords (and many others) started out plundering music history to make sample-heavy tracks. When they couldn’t clear Abba’s Dancing Queen, featured in a song on their debut album, they tried and failed to convince the band to let them use the sample and burned the remaining copies in a Swedish field. Shortly afterwards, they engineered a UK number one in their reworking of the Doctor Who theme, Doctorin’ the Tardis, and then wrote a guide so anyone else could do it, before going on to sell more singles than any other act in the UK during 1991.

Their many, many other strange undertakings include firing a machine gun into the crowd at the Brits (don’t worry they used blanks), burying their Brit award near Stonehenge, failing to sacrifice a statue of Elvis at the North Pole (though writing a book about it), allegedly setting up their own undertaking and plant hire business, splurging money on submarines, deleting their entire back catalogue and subsequently losing millions in royalties, and making Noel Edmonds cry.

One group that the KLF were compared to during their campaign of confusion were The Residents. Formed in the late 1960s and based in San Francisco, the group started out as filmmakers, but soon found that making soundtracks was slightly easier then getting wildly unorthodox movies made. They turned into an anonymous art collective, happy to plunder and dissect music history (copies of their first album Meet The Residents were sleeved in vandalised Beatles covers) while making disturbing, jarring, avant-garde music influenced by Captain Beefheart and musique concrète that referenced all manner of distasteful subjects. During highly theatrical live performances, that continue to this day, they hid their identities behind a number of masks and costumes, most famously a rather spiffy giant eyeball/tuxedo combo. Even after 50 years, their real identities are shrouded in mystery.

Another anarcho performance art group (beginning life as COUM Transmissions, which featured nudity and self-mutilation in their artworks) that slowly gravitated towards music – initiating an entirely new genre as a result. Throbbing Gristle formed in Hull in the mid 1970s, centred around Genesis P-Orridge and Cosey Fanni Tutti. Their music and performances were always confrontational, incorporating pornography, right-wing imagery, murder and transgressive lyrics into their work (try listening to Hamburger Lady with the lights off). The more lurid elements of the lyrics often distracted by the progressive, radical sounds they created, that influenced the burgeoning electronic and noise music scenes. The name they gave their independent record label, Industrial, was later used to describe any type of music that featured abrasive, avant-garde, experimental sounds. 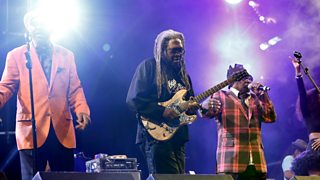 Parliament / Funkadelic performing at Glastonbury in 2015.

From the sublime to the ridiculous. Parliament started life as a fairly clean-cut doo-wop group (The Parliaments), fronted by the visionary George Clinton. But after a record label dispute over the name in the late 1960s, Clinton rebranded the band as Funkadelic and guided their music in a far funkier and far weirder direction, merging elements of psychedelia, science fiction, horror and hippy culture. He then also re-launched Parliament, using many of the same musicians (including the incredibly unified Bootsy Collins, poached from James Brown) and merged the whole thing into the Parliament-Funkadelic, P-Funk extravaganza. Their live shows were legendary featuring a giant spaceship, grown men dressed in nappies, characters with names like Sir Nose D’voidoffunk and songs with titles such as ‘Aqua Boogie (A Psychoalphadiscobetabioaquadoloop)’. There's truly nothing like them.

5. The Voluptuous Horror of Karen Black

Combining the worlds of performance art, transgressive cinema, video nasties and rock and roll: Kembra Pfahler is a force of nature. Describing her art as ‘availabilist’ (using whatever is available to be creative), she featured in the work of extreme filmmakers such as Richard Kern and Nick Zedd and was an established figure in the New York, Lower East Side punk scene of the 1980s, centred around the ABC No Rio club. In the early 1990s she formed The Voluptuous Horror of Karen Black, where she appeared naked, painted red, wearing thigh-high boots, with blacked-out teeth and a black bouffant wig. The music was a mix of glam, punk and metal, with plenty of pagan ritual and wrestling-style theatricality thrown in. As well as slumming it with the punks, her art has been featured in highbrow institutions such as MoMA and the Whitney Museum.

Now, there’s the outrageous of getting naked or spraying fake blood on your audience and there’s the outrageous of demolishing the venue you’re performing in with a bulldozer. Japanese legends Hanatarash fall into the latter category. Inspired by noted German industrialists Einstürzende Neubauten, this Japanese noise outfit, formed in 1984, gleefully incorporated power tools, heavy machinery and weaponry in their music. The welfare of the audience was never considered, as circular saws were unleashed on stage (the lead singer nearly cut his own leg off) and Molotov cocktails were brandished. And, yes, front man Yamantaka Eye (later of The Boredoms) did indeed arrive on stage in a bulldozer, destroying a large part of the club they were performing in. The band ceased operations when no one would allow them anywhere near their properties.

Front man Yamantaka Eye arrived on stage in a bulldozer, destroying a large part of the club they were performing in."

Sex and violence have always been mainstays of popular culture and both featured heavily in the work of Wendy O. Williams and Plasmatics. Formed by performance artists intrigued by the notion of audience confrontation, the band, fronted by the fierce and frequently nude Williams, began playing at the legendary CBGBs and soon started to attract an audience due to a stage show that consisted of chainsawing guitars, smashing TVs with sledgehammers and detonating equipment. Though record labels were too scared to sign them, they sold out venues across the US, though Williams was often arrested on obscenity or assault charges. They eventually released five albums throughout the 1980s, performed on the TV shows Fridays and SCTV and even had the distinction of being banned by the Greater London Council due to their plans to blow up a car on stage.