Rachel Maclean: A grotesque Disney for the Facebook generation 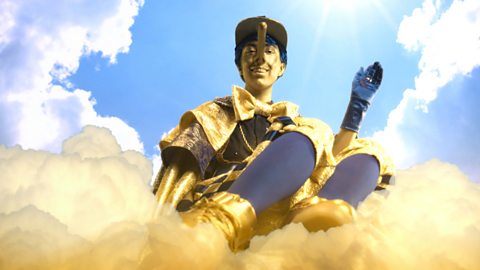 Spite Your Face by Rachel Maclean

The theatrical trailer for Rachel Maclean's entry in the 2017 Venice Biennale.

Meeting Rachel Maclean face to face is a peculiar experience – almost as peculiar as watching one of her strange, disturbing films. She’s friendly and matter-of-fact yet there’s something odd about her. Like one of the performers in her surreal movies, she seems like someone in disguise.

Maclean plays all the parts in all her films, but she’s unrecognisable in almost all of them: caked in make-up, she’s like a character in a cartoon. I’ve seen her in countless videos and I still have no idea what she really looks like.

Though she’s centre stage in all her films, it feels as if she’s hiding in plain sight. It’s a similar story in real life. In her bright pink spectacles and clunky costume jewellery, she looks like she’s stepped out of a comic book.

Rachel Maclean has come a long way in a short time. Still under 30, she’s already exhibited as far afield as Tate Britain, Munich and St Petersburg, and this summer she’s representing Scotland at the 57th Venice Biennale with her new film, Spite Your Face.

Written by Maclean during the political fallout of Brexit and Trump's presidential election, the film is a dark update of the Pinocchio story that explores the murky links between language and lies.

The venue is a medieval church, but you can be sure her show will be bang up to date. I’ve never come across an artist with such a sharp view of the modern world, or such a shrewd perception of the way we live today.

Maclean makes digital videos which play like futuristic fairy tales. Humans morph into animals, nothing is quite as it seems. Fame and consumerism are among her targets, but her chief subject is cyberspace - the way it warps our perception of reality. Her work encapsulates the queasy magic of the internet - a place of infinite possibilities, where it’s impossible to know what’s real.

“I wanted to critique the world of social media, and the experience of the internet, but I don’t want to feel like I’m doing it from the outside, looking in,” she explains. “I’m part of that world, and you can’t really help but be part of it if you’re an artist nowadays.”

For Rachel, the internet has been liberating (you can’t imagine her work without it) but it also feels precarious. “There is a level of narcissism within our culture that social media has exaggerated.” Her dystopian films convey this deep feeling of unease.

Spite Your Face is a re-telling of Pinocchio. Courtesy Scotland + Venice. Commissioned by Alchemy Film & Arts in partnership with Talbot Rice Gallery and the University of Edinburgh. Photo by Patrick Rafferty.

Maclean was born in 1987 in Edinburgh. Her parents were both art teachers. Her dad had a video camera and she made her own films from an early age – homemade horror movies, inspired by The Blair Witch Project.

It’s Alice in Wonderland for the Facebook generation, Barbie meets the Brothers Grimm

She dismisses these juvenile experiments as “really stupid – nothing of any quality,” but few experiences are as formative as this kind of childlike “mucking around.” Her passion for acting and roleplaying also dates back to her early childhood. “I always really liked dressing up when I was a kid.”

Rachel could have gone to film school but she opted for art school instead, and ended up studying Drawing & Painting at Edinburgh College of Art. As a student she was inspired by the work of Jeff Koons (“I liked the cheekiness of it”).

Cindy Sherman was another influence (like Maclean, Sherman transforms her appearance time and time again to portray a bewildering array of roles) but the thing that brought her back to film was the creative scope of ‘green screen’ - a monochromatic backdrop which allows filmmakers to superimpose all sorts of backgrounds, without the cost and bother of building sets. Rachel likens it to ‘moving collage’. It’s a good description of her work.

Her use of collage isn’t confined to visual imagery. Her soundtracks are often plundered from familiar mainstream sources, such as TV shows like Britain’s Got Talent, The Apprentice and Jeremy Kyle. The resulting juxtapositions are wonderfully absurd and often extremely funny. It’s a nice surprise to find a contemporary artist who actually makes you laugh out loud.

Some of her best work has tackled national identity, particularly in the run-up to the Scottish independence referendum. The Lion and The Unicorn played with the imperial icons of the United Kingdom; I Heart Scotland plays with Scottish iconography, from folklore and mythology to tourist tat.

Unlike a lot of modern artists, she never forgets her sense of humour. Her work makes telling points about modern Britain, but above all it’s terrific fun.

“I guess a lot of my work feels glossy, but also grotesque,” she says. “I want the films to be seductive at some level, but also to be repulsive.” It’s this blend of salt and saccharine which gives her artworks such bite. The surface is sickly sweet, like Disney, but the substance is a lot darker. It’s Alice in Wonderland for the Facebook generation, Barbie meets the Brothers Grimm.

She wrote her Biennale film in Venice, in the aftermath of Brexit. “It was an odd time,” she recalls. “It felt quite scary but interesting nonetheless.”

Trump was on the rise; the Italian constitutional referendum took place while she was there. Yet amid this political upheaval, she found inspiration in the ancient art and architecture and that lights up every corner of this floating city.

Against this timeless backdrop, today’s upheavals look inconsequential. When Donald Trump is long forgotten, Venice will still be there.

Rachel Maclean is representing Scotland at the 57th Venice Biennale. Her film installation, Spite Your Face, is at the Chiesa di Santa Caterina, Cannaregio, Venice from 13 May to 26 November 2017. 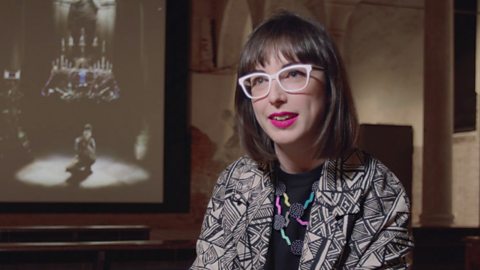 The Making of Spite Your Face

Rachel Maclean discusses the process behind the making of her new film, Spite Your Face. 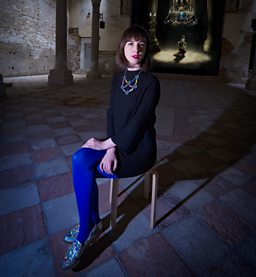 Rachel Maclean on location in Venice ahead of the launch of her entry for the 2017 Venice Biennale. Courtesy Scotland + Venice. Commissioned by Alchemy Film & Arts in partnership with Talbot Rice Gallery and the University of Edinburgh. Photo by Patrick Rafferty.

Collection of images from Rachel Maclean's Spite Your Face. Courtesy the artist. Commissioned by Alchemy Film & Arts in partnership with Talbot Rice Gallery and the University of Edinburgh on behalf of Scotland + Venice.

Rachel Maclean as the pauper character from Please Sir..., 2014, a comic modern take on Mark Twain's The Prince and the Pauper. Commissioned by CCA Glasgow.