Ahead of their time and uniquely unsettling, Shirley Jackson's stories explored dark forces in apparently idyllic communities. As horror fans lap up the new Netflix adaptation of her classic novel The Haunting of Hill House, BRIAN MORTON profiles the late American author.

Shirley Jackson, as pictured on the cover of A Rather Haunted Life, a biography by Ruth Franklin

On the shade card of American Gothic, there is no blacker black than Shirley Jackson black. Her stories are all the darker and more lacerating for being set in small, apparently idyllic communities, against domestic interiors and flowery gardens largely occupied by women and children, and conducted with gentle manners and old-fashioned politeness.

Her narrative style was simple, direct and in most obvious respects, resolutely un-Gothic. One of her most distinguished editors, Harold Ross of The New Yorker, responded to her most notorious story – as many readers did – with some puzzlement, but was still able to say that it was “a classic in some category”. Quite what that category was failed him, and has failed critics ever since.

There is no blacker black than Shirley Jackson black

Jackson herself never chose to explain her work or to give consistent interpretations of her stories. It isn’t quite true that she received death threats when The Lottery was published in Ross’s high-gloss magazine in June 1948.

Most correspondents were admiring, but baffled. Some cancelled subscriptions, or threatened to. Not a few, including academic anthropologists, wondered whether Jackson’s description of a brutal village ritual, the tribunal stoning of a villager chosen by lot, was based on actual practice somewhere in America.

It says a great deal about America just after the Second World War that the country’s international dominance was balanced by a certain hazy ignorance of what might be going on in its vast hinterland.

That some of it was violent and prejudicial and socially exclusive should have been no surprise to Americans, but what made Jackson’s work so disturbing and hard to categorise was her ability to locate evil not in ghettos or backwaters of rural poverty, but right at the heart of a prosperous idyll, and not among damaged and dislocated war veterans but among homemakers and their well-fed, sun-kissed children. 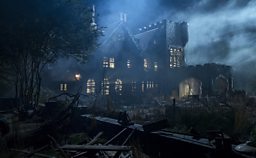 A little later, Grace Metalious, a novelist whose life, marital history and early death bear a strong resemblance to Jackson’s own, told a similar story in Peyton Place, but minus the deep mythic underpinnings that made The Lottery and novels like Hangsaman, The Haunting of Hill House, and We Have Always Lived In The Castle.

Jackson’s apparent trumping with The Lottery of Orson Welles’ 'documentary' War of the Worlds was only possible because of her deep absorption in the literature of ritual and romance, the same sources that had stood very prominently behind what is perhaps the defining literary document of the 20th century, TS Eliot’s The Waste Land.

A little like the poet, Jackson was shaped by removal. She grew up in wealthy California, a background described in her first novel The Road Through The Wall (also 1948), before moving east with her family and eventually gravitating to New York.

Though no more than an average student, she was fortunate (maybe) in meeting and marrying (over family resistance) Stanley Edgar Hyman, a brilliant young Jewish intellectual who became her supporter, critic, secret sharer and incubus.

It was Hyman who recognised that she would only break through to real creativity and to what he confidently predicted would be greatness when she learned to harness “the demon in the mind” and “not only feel evil but understand it”.

Mark Gatiss on The Haunting 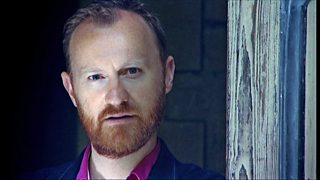 Actor and writer Mark Gatiss profiled the 1963 British film The Haunting for his BBC Four series, A History of Horror. The film was by prolific Hollywood director Robert Wise; the screenplay was based on Jackson's 1959 novel The Haunting of Hill House. Wise's previous film, West Side Story, won Best Director and Best Picture Oscars, as did his next outing as director, The Sound of Music.

Jackson allowed it to be put around that she was a practising witch, an interest that was still there in her last and greatest novel We Have Always Lived In The Castle in which the child Merricat, who has poisoned four members of her family (no spoiler there; even the laziest reader somehow knows this from page one), communicates with a familiar and casts spells, none of them more powerful than the one she throws over even alert readers.

All this darkness just under the horizon of comfort and nurture, in much the same way that Arthur Miller’s equally multi-layered and ambiguous The Crucible (1953) rips away a superficial domesticity and piety to expose raw drives below.

Jackson allowed it to be put around that she was a practising witch, an interest that was still there in her last and greatest novel We Have Always Lived In The Castle

For much of her life, Jackson was known to friends as a scatty mom, wild of hair, given to some lapses of care with her children, but essentially no different to a hundred million others who still bought into the ladies’ magazine ethos of husband and kids first, crisp ironing and doilies.

When Jackson was admitted to hospital to deliver her third child the clerk asked for her profession. “Housewife?”, “Writer”, “Housewife?”, “Writer”; he put down “Housewife” anyway. And in a sense he was right. Jackson’s gift lies not in her literariness but in the almost cartoonish (she might have made a career at that, too) simplicity and at-handness of her presentation, in her intense focus on small things and not large ideological abstractions.

She scarcely wrote or commented on the issues of the day, but she nailed them more completely than any other writer, and certainly any male writer. Hyman shaped her, but he also conspired at her demise. Like Metalious, she succumbed to the vision she had created, dying young.

In 1965, aged just 48, alcoholic, agoraphobic, overweight, poisoned by nicotine, Shirley Jackson fell asleep and didn’t wake up. A red-haired princess at last went under the hill.

A version of this article was originally published in December 2016 to mark the centenary of the author's birth. 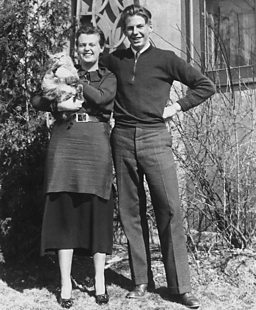 Shirley Jackson with her brother Barry Jackson in Rochester, New York circa 1935