End to end with 15 football phrases from around the world

The 32 teams competing for the World Cup in Russia have each brought with them a distinctive football lexicon that reflects their country’s relationship with the sport.

Tom Williams, author of Do You Speak Football?, picks up his commentary mic and weaves his way down the pitch with a selection of colourful football terms from around the world...

The cross comes into the box. This should be an easy one for the goalkeeper… but he’s got nowhere near it! He was flapping his hands all over the place – looks like we have a butterfly hunter between the posts!

2. Kukanyaga nyoka – To step on a snake (Kenya)

The ball’s loose. It falls invitingly for the striker. He’s surely going to score here… but no! He's stepped on a snake – he's missed his kick completely!

Butterfly hunting and stepping on a snake. (Illustrations by Dan Leydon)

It’s pinball in the penalty area now. Luckily this lot have got a bruising centre-back – a proper wardrobe – and he shoves an opponent out of the way before clearing the ball to safety.

Neat work from the holding midfielder – he hoovers up the loose ball and moves it on to a team-mate. Every side could do with a vacuum cleaner like him in their ranks to keep things tidy in midfield.

Here’s the control tower – the central midfielder who seems to have an aerial view of proceedings and knows exactly where the ball needs to go. He takes a touch and sprays a pass out to the left wing.

Oh, what a smooth pass that was! The winger didn’t even need to break stride! That was a butter pass if ever I’ve seen one.

7. Deff ko watt – To give someone a haircut (Senegal)

The winger is quickly closed down by an opponent, but he takes him out of the game! Fantastic skill. The defender charged in and he flicked the ball right over his head – he gave him a haircut!

Great cross into the box, but that’s a total miskick from the striker! Aimed right and the ball went left – a real poop ball.

One of the midfielders has kept the ball in play and oh, what a clever piece of skill! An opponent charged in, but he managed to slip the ball between his legs and collect it on the other side. Lovely little salad.

The midfielder plays an aerial pass to a team-mate. It’s a little bit behind him, but that’s great improvisation! He produces a pigeon’s wing to help the ball on – lifting his foot out to one side and using his heel to volley the ball to a colleague. Superb technique!

The forward attempts to control the ball, but oh dear! It hits him on the shin and bounces away. This guy’s got no technique whatsoever – he’s an absolute tree.

Luckily one of the full-backs was following up and he wraps his foot around the ball, curling a banana cross towards the back post…

The centre-forward has timed his run to perfection! He leaps into the air and meets the ball with a thumping header – a right buffalo push!

The goalkeeper’s rooted to the spot! He’s standing there like a vase!

15. Onde dorme a coruja – Where the owl sleeps (Brazil)

WHAT A GOAL! Beautiful cross, emphatic header, keeper motionless, and the ball sails into the top corner – right where the owl sleeps. 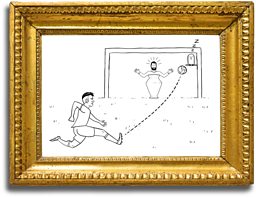 The goalkeeper stands like a vase as the ball heads for where the owl sleeps. (Illustration by Dan Leydon)

Do You Speak Football? A Glossary of Football Words and Phrases from Around the World is published by Bloomsbury.