There's something about Mary Magdalene

Mary Magdalene is one of the best-known figures in the Bible and has been a frequent inspiration to artists and writers over the last 2000 years. 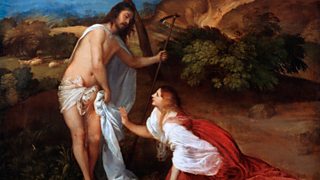 However, her identity has provoked much debate. In the Western Church she soon became conflated with two other figures in the Bible; a repentant sinner and Mary of Bethany. Texts discovered in the mid-20th Century raised further questions about the nature of her relationship with Jesus.

Here are seven things we DO know about Mary...

Mary Magdalene is first mentioned by name in Mark, the second Gospel. However, Luke refers to Mary earlier in his account of Jesus' life than Mark does. In Luke 8:2, Mary is referred to as someone Jesus cured of evil spirits and ailments and 'out of whom went seven devils'.

2. Witness to the resurrection

In the Gospel of John, Mary Magdalene is the first person to see Jesus after the resurrection. Jesus appeared to Mary after she returned alone to the empty tomb and instructed her to tell the apostles that he was ascending to God. Mary at first thought she was talking to the gardener. 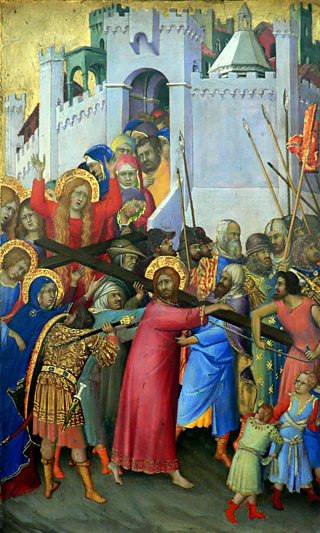 The Carrying of the Cross by Simone Martini, c1335. Mary Magdalene is the woman in red with raised arms.

In 591 AD, Pope Gregory said Mary Magdalene was the woman who Simon the Pharisee described as 'a sinner' in Luke's Gospel. Gregory also said that the seven demons cast out of Mary Magdalene by Jesus were the seven deadly sins. By implication, she was a prostitute.

Texts discovered after World War Two in Egypt have been read by some as evidence that Mary Magdalene was the favourite disciple of Jesus, even that they were perhaps married. These views have been strongly rejected by many.

In the 13th Century, Saint-Maximin-la-Sainte-Baume in France announced it had Mary Magdalene's body as a relic. This was disputed by Vezelay, which had long said it had the relics.

The claims that Mary was in France were supported by a story that she had travelled to Provence across the Mediterranean in a rudderless boat.

In 1969, the Catholic Church said that the annual feast day of Saint Mary Magdalene, on 22 July, relates only to the woman who saw the risen Jesus and not the other women mentioned by Pope Gregory. This effectively brought an end to support for the idea of the 'composite Magdalene'.

In popular culture, Mary Magdalene is still often seen as a sinful woman, as in the musical Jesus Christ Superstar and Lady Gaga’s song, Judas.

In Our Time: Christianity