Christmas might today be a time of joy and festivity, but a few centuries before Father Christmas, much of Europe saw the midwinter as the time when the dead and demonic roamed the frosty countryside. PAUL HAWKINS selects seven of the most frightening Christmas creatures.

Krampus and Saint Nicholas in an Austrian newspaper illustration from 1896

Krampus resembles an anthropomorphic, demonic goat who punishes misbehaving children. He rips out girls’ pigtails, beats children with birch branches and often carries a basket on his back so he can carry off a child of his choosing and consume them for Christmas dinner.

He rips out girls’ pigtails and beats children with birch branches

5 December is Krampusnacht – the night where men in homemade Krampus costumes charged around Alpine villages with pitchforks, demanding booze and threatening strangers.

Genuine monsters from the fires of Hell would probably have caused less destruction. These 'Krampus Runs' continue today and are a little more organised but still terrifying to witness.

Whilst many sinister Christmas characters peaked during the 15th and 16th centuries, interest in Krampus has grown over time. The 19th-century invention of Christmas cards saw an explosion of images of Krampus sent around the world.

Krampus Runs have spread to America too and, since 2013, there have been a series of Krampus-related Christmas films, presenting the character as an antidote to over-sentimental festive celebrations. 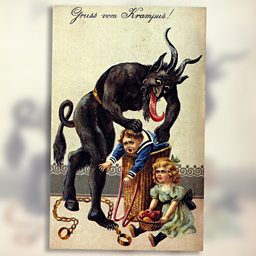 In Norway and Sweden, 13 December is St Lucia’s Day. St Lucia is represented as a beautiful young woman and nowadays the occasion is marked by a a young woman in a white sash representing the Saint roaming the streets with a Health and Safety Officer-baiting crown of candles on her head.

However, a few centuries ago Norway celebrated Lucia (or Lussi) in a very different form. For the night before 13 December – Lussi’s Night - was the night when evil spirits and demons rose up to wander the Earth. Children needed to be good and the adults warded off evil by protecting their homes with the sign of the cross.

Lussi was portrayed as a hideous demon with tyrannical powers. She rode through the skies on a broomstick accompanied by demons, evil spirits and trolls, spreading mayhem and chaos, destroying property, crops and livestock and kidnapping or killing anyone foolish enough to not be tucked up safely in bed.

Nils Bergslien, Julereia, 1922: Lussi is shown stealing a child while riding her broom

3. The Karakoncolos (Bulgaria, Turkey and Serbia)

The Karakoncolos is generally portrayed as a cross between the Devil and a Sasquatch. In Turkey, he would stand at street corners on winter nights setting riddles for passers-by. If the traveller gave an answer that included the word ‘black’ they were free to go on their way. If not, he would strike them dead with a single blow.

Elsewhere the Karakoncolos’ favourite trick was to disguise their voice to pretend to be someone’s friend or relative and lure their intended victim out into the snow.

Sometimes the creature would set them in a trance and leave them to roam free but in Serbia, the Karakoncolos preferred to jump on the victim’s back and use them as a personal taxi service. The exhausted person was only released at dawn.

If you invited a Karakoncolos into your house, they would feel compelled to imitate their hosts’ behaviour. If you set fire to silk or thread, the Karakancolos would be tricked into setting fire to its own fur, and would run from the house screaming to find water.

In Greece a group of demons called the Kallikantzaroi were said to spend the year underground sawing through the tree of life that ran through the Earth.

Each December, when just a single thread held the tree together, the 12 days of Christmas would compel them to come overground and wander the Earth. By their return in January, the tree had repaired itself and they had to start again.

Once overground they caused mischief and chaos but, above all, sought to steal any child born over the 12 days of Christmas and turn them into fellow Kallikantzaroi. They could be kept at bay by binding newborn babies in straw and garlic.

You could also stop the creatures from getting into your house by placing a colander outside the door. The Kallikantzaroi would be compelled to count the holes but, because the number three is holy in Greek, they would fail to count that number and have to start again. This would occupy them until sunrise, when the house would be safe until darkness fell again. 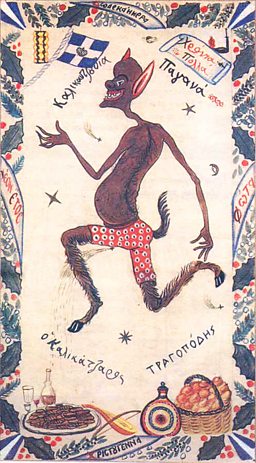 5. Frau Perchta (Austria and parts of Germany and Italy)

In pre-Christian traditions, Perchta was an Alpine Goddess whose particular celebration day coincided with the Twelfth Night. After pre-Christian religions were displaced, she instead became a demonic witch who stalked villages, punishing anyone who dared to displease her.

If you angered her she would appear as a demonic, horned monster

Sometimes she appeared as a mischievous, dishevelled old woman. Alternatively, her appearance could depend on how you perceived her and whether you had pleased her.

If you were faithful, obedient and observed her rituals, Perchta would appear to you as a woman of divine beauty. If you angered her she would appear as a demonic, horned monster with a ferocious bloodlust.

Perchta would let you be as long as you followed her rituals on Perchta’s night, such as eating a traditional meal and special cakes baked in her honour.

Should you fail to do that, she would sneak into your room whilst you slept, slit your belly open and replace your innards with pebbles and straw. The following day, whoever discovered your corpse would assume you had simply died in your sleep. 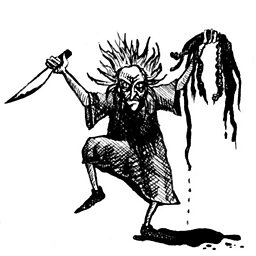 Many of these creatures served as a metaphors for surviving the horrors of winter and, as Icelandic winters are tougher than most, it is unsurprising it has some of the most creative mythology.

The 13 Yule Lads visit houses – one Yule Lad a day – between 12 and 24 December. Nowadays they are depicted as tricksters, each with their own unique form of mischief. Spoon Licker steals wooden spoons to lick off the food residue, Door Slammer slams the doors of the house all night so nobody can rest, and you can probably guess what Sausage Swiper gets up to!

Historically, however, the Yule Lads were much more vicious and, in the 18th century, telling stories of the Yule Lads’ behaviour was e a competitive activity as each storyteller outdied the last with shocking tales of the gruesome brutality and gratuitous violence.

The tales got so out of hand that, in 1746, a public decree banned “the foolish custom of scaring children with the Yuletide lads and ghosts”.

7. Jólakötturinn or The Christmas Cat (Iceland)

If that was not enough, the Yule Lads also had a pet cat, who was perhaps the most terrifying creature of all. The name 'Christmas Cat' might conjure up images of a lovely kitten in a Santa hat but Jólakötturinn, who first appeared in the 19th century, was a huge, ferocious beast with razor-like whiskers, blazing eyes and terrible claws who consumed any child who did not receive new clothes on Christmas Day.

He was a huge, ferocious beast with razor-like whiskers, blazing eyes and terrible claws

In 1932 the Icelandic poet Jóhannes úr Kötlum wrote a book of Christmas poems for children that - much like Clement Clarke-Moore’s A Visit From St Nicholas in the US or Dickens’ A Christmas Carol in the UK – enshrined Christmas traditions for future generations.

His telling of the Yule Lads became the 'official' version and his playful but macabre poem on the Christmas Cat captured the ferocity of the beast and the terror it inspired. In 1987 Björk did her own version of the poem, in one of her earliest solo recordings.

Paul Hawkins is the author of Bad Santas and Other Creepy Christmas Characters (Simon and Schuster UK), a book that tracks the history of Father Christmas that led to his creation.

Björk's take on the poem