Actor Matt Smith is best known for his portrayal of the BBC’s famous Time Lord, Doctor Who – the youngest person ever to take on the part. After his professional football aspirations were dashed by injury he turned to acting, and soon became a star of stage and screen. Most recently, he has garnered international recognition for his portrayal of HRH Prince Philip in the highly acclaimed Netflix series, The Crown. He joins Kirsty Young for a frank and energetic interview. Here’s what we learned… 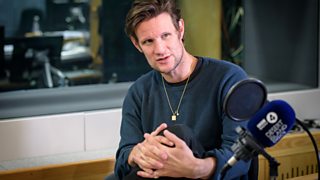 1. He was a twitchy child

Matt claims he was “quite bizarre as a child.” He states, “I used to blink a lot. I was quite twitchy. But I was good at football, so that gave me something. I think now I’d be diagnosed with ADHD or something, but, I was happy, you know, because I had great parents and great friends.” He also suffered from a speech impediment, which once came back to haunt him when he was on stage, and he “nearly quit, it was so bad”.

2. His dad is his greatest influence

Matt describes his father as “a legend” and says, “He’s the greatest influence on my life, bar none. I often think all of my truest moments as an actor are somehow impersonations of him.” The actor says his dad “put his family first”, remortgaging the house to help his sister through dance school and driving Matt to football training, as well as running a business: “It was just constant dedication.”

3. He thinks HRH Prince Philip is a rock star

Matt admits he’s not an obvious choice to play HRH Prince Philip because he’s “completely the wrong class” but he embodied the Duke of Edinburgh by donning a “great wig” and always walking with his hands behind his back. Another trick he deployed would make co-star Claire Foy laugh: “I’d go ‘on no, yes, absolutely’... or I’d say ‘Olympic’, because he says Olympic in a very sort of perfect way. He’s a rock star… He did what he wanted, he didn’t ask permission and his wife was The Queen… I kind of sided with him.”

4. He was almost a professional footballer

Football came naturally to him and Matt confesses: “All I did was play football. Ten hours a day.” And he would even dream about the beautiful game: “I was imagining myself doing well; I was imagining myself as the best.” Then, when he was captain of Leicester City’s youth team, he suffered from a debilitating back condition called spondylosis and the club decided to release him. “At school I was the footballer and suddenly I wasn’t that.” It was a tough time because “I just felt unfulfilled… I was so certain that that was what I was going to do.” 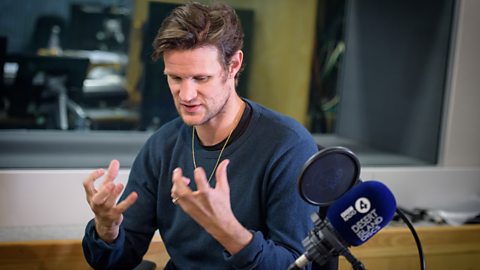 Matt Smith: ‘I was Matt the footballer’

Matt Smith on how injury ended his footballing career.

5. His drama teacher changed his life

Fortuitously, his drama teacher, Mr Hardingham, recognised his potential. Matt recalls him saying, “you were never meant to be a footballer. I always thought you were really great at acting.” After Matt failed to show up for two drama festivals the teacher called his mum to say he was going to give the teen one more chance and put him in a play – Twelve Angry Men. Thankfully, Matt’s mum convinced him to do it. At first, he thought acting was a “bit girly” and kept it a secret from his friends. But he soon discovered that he “got the same sense of freedom” as he did playing football. He recognises the part Mr Hardingham played in his future: “He changed my life.”

The actor’s fourth disc is classic trance track For an Angel by Paul Van Dyk, featuring Rachel McFarlane. When he was around 18 years old, he discovered decks and dance music – garage, house and trance – and this is a track that he bought “back in the day.” He remembers one controversial decision he made when he was head boy: “I spent all of the money that was meant to be for the year book on the social fund and we threw three parties, all of which I DJ’d at.” 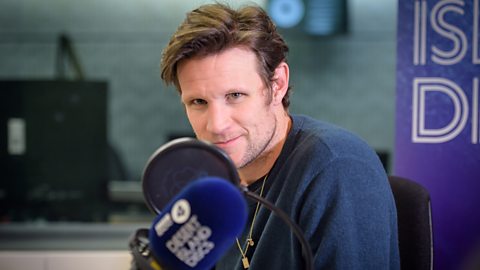 Matt Smith on his DJ days.

7. He’d never watched an episode of Doctor Who before he got the part

I’d never seen an episode [of Doctor Who]. Not one. Not one episode in my whole life.

Before Matt went to audition for the role he confesses he’d “never seen an episode” of Doctor Who, but on reading the script he thought, “this is brilliant”. The audition was top secret, in a Travelodge in South London, which made it “amazing and illicit”. When the casting team asked him what his favourite episode was he had the perfect excuse: “Look, Doctor Who’s on at seven o’clock on a Saturday night. I’m in a boozer then.”

8. He had a “wobble” before taking the role of the Doctor

Before the final deal was done, the actor went to a meal at showrunner Steven Moffat’s house and was shown plates with David Tennant’s face on. Someone picked one up and said, “just so you know, this is what it’s like.” He admits that he did have a “wobble” before taking on the role but that he’s never looked back: “It’s the greatest part of my life. It was one of the greatest experiences of my life. I loved every minute of it.”

9. He learned lines by rapping them

Anyone playing Doctor Who is given page after page of script to learn very quickly. Matt developed his own method: "I learn [lines] rhythmically. I would literally rap them.” He loves poetry too because “it’s a bit like a song – you can keep returning to it.” True to his word, he chooses Ted Hughes’s Birthday Letters as his book to take to the desert island.

10. He’s seen his own face tattooed on a fan's thigh

He says the Doctor Who fans are a good bunch: “Once you’re in, you’re in.” One of the strangest things he’s been shown is a tattoo of his own face on a woman’s thigh, which the owner asked him to sign. He laughed and said, “what on earth does your boyfriend think? And he was there and he was smiling away.” 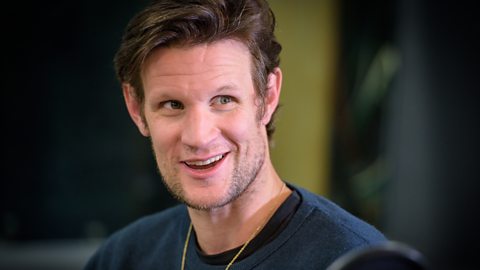 Matt admits that he’s thinking about having children and he’d like “a lot of them.” He says, in “the fantasised version of my life I have a big family and loads of dogs” and “dare I say, I think I’d be quite a good dad.”