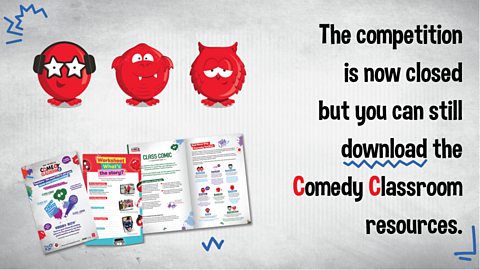 What is Comedy Classroom?

The Red Nose Day Comedy Classroom competition with Blue Peter is now closed, so please do not enter.

This year’s competition launched on 24th November 2016 and closed on 28th February 2017. The entries are in the process of being judged and the winners will be revealed live on a special Red Nose Day Blue Peter programme on 23rd March.

Now you’ve written your witty work why not put on a school comedy showcase or event for Red Nose Day? Explore the teachers’ resources, posters and films for ideas and advice.

Why should you get involved?

The competition was supported by Red Nose Day 2017, the National Literacy Trust and Blue Peter.

Together, with BBC Learning, we have provided a range of teaching resources including comedy toolboxes for primary and secondary, which include films and downloadable lesson plans to help you inspire your pupils to create their own pieces of comedy.

Resources for secondary students will remain available on the site throughout 2016/2017 and although there is no competition for this age range this year, there are lots of suggested ways for your students to get involved and get performing their own comedy for Red Nose Day 2017. We hope you enjoy using our toolkits to create and share laughs with your students.

Comedy Classroom was initially conceived as a secondary school-based competition and literacy initiative for 2016, with the aim of encouraging teachers and students around the UK to ‘have a write laugh’ in the classroom through comedy writing. For the academic year 2016/2017 we launched our new phase opening a competition to primary-aged students.

Comedy Classroom offers a raft of teaching resources, including lesson plans, a comedy toolbox, and a fantastic collection of CBBC and Comic Relief comedy archives as well as ongoing support and ideas from Blue Peter and Comic Relief.

How can teachers get involved?

Although our 2017 Comedy Classroom is now closed, our primary and secondary resources will remain available on the site throughout the academic year. We hope you’ll enjoy encouraging your pupils and students to get involved with Red Nose Day by writing jokes and producing and performing their own comedy shows.

Why comedy and literacy?

Comedy plays with language, content, grammar and audience awareness to create laughs. It can be a great asset in the classroom. A focus on comedy writing is a perfect match for English core requirements across the UK and harnesses many key writing skills.

How to get started...

By using these resources your pupils and students will…

• Communicate clearly and confidently with an audience and also in evaluating the work of themselves and others
• Demonstrate they can gain, maintain and monitor the interest of an audience
• Consider why texts can change to be applied to different audiences
• Be able to assess the effectiveness of their own and others' writing and suggest improvements

Full breakdowns of curriculum-led outcomes can be found in the teaching resource booklets for primary and secondary.

Top tips from a teacher