Mizzle and smirr: 13 British words and phrases for rain

For a small group of islands, the United Kingdom gets its fair share of rain. Whether it’s hard and horizontal, fine drizzle, or a sudden, wet-to-the-undies downpour, the Brits know a thing or two about precipitation.

Perhaps it’s due to the sheer amount of the wet stuff we’re exposed to that we love talking about it so much: we’ve no shortage of weird and wonderful words and phrases to describe rain.

Wellies aren't going to save you when it's raining upwards.

A sudden, heavy, downpour that starts and ends suddenly, normally covering a small geographical area. Cloudbursts are often responsible for flash floods. The term cloudburst derived from the notion that clouds are like water balloons, releasing copious amounts of water when burst.

On the other end of the spectrum is this rather unpleasant term for light rain that you can only just see. We might say it’s spitting when it's just started to rain, with this type of barely-there rainfall often preceding a heavier downpour.

Where the English use spitting, the Welsh might use picking. The word comes from the Welsh word pigan meaning “starting to rain”.

A misty drizzle. The term is commonly used in Devon and Cornwall to describe a mixture of fine drizzle and thick, saturating mist or fog. Although mizzle might seem like a clever portmanteau combining mist and drizzle, it likely derives from the Low German miseln or Dutch word for drizzle, miezelen. 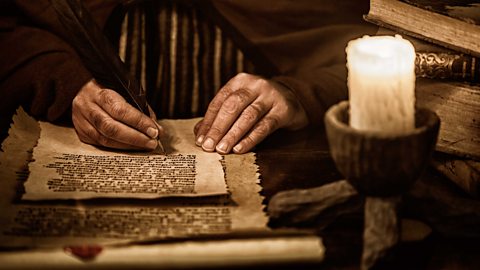 What a weather forecast was like in the 14th Century

We think of weather forecasts as a modern service but they've been made for centuries.

A Scottish word to describe a fine, drifting rain or drizzle. A smirr (or smur in parts of England) is so light it seems like a mist or smoke. It may in fact be related to the Dutch word for mist, smoor. Scottish poet George Campbell Hay immortalised this drizzly form of precipitation in “The Smoky Smirr o Rain”, published in 1948.

If rain is so heavy that it bounces up and hits you from below, it is "raining upwards".

In Somerset, if it is letty outside, there is just enough rain to make outdoor work difficult. The phrase comes from the old word let (meaning disallow), as in “let and hindrance”.

In the Midlands and northeast of England, plothering is used to describe heavy rain with little or no accompanying wind. The wonderfully onomatopoeic word describes the sound of fat droplets falling straight down and hitting the ground.

Stoat is a Scottish word for bounce. Stoating rain is so heavy that it bounces off the ground.

If rain is so heavy that it bounces up and hits you from below, it is raining upwards.

A heavy, drenching rain. We might also use the words torrent, deluge or downpour to describe this type of apocalyptic precipitation. The origins of this 17th Century phrase are unknown. One theory is that because of all the stray cats and dogs living in the cities, the streets would have been flooded with animals during heavy rainstorms.

Jeremy is prepared for a cow-quaker.

11. Coming down in stair rods

This is a colloquial phrase from the North of England. If it’s raining stair rods it’s thick, straight, painfully heavy rain that resembles the thin metal poles that hold stair-carpets in place.

This wonderfully evocative phrase describes a rainstorm so heavy that the cows shake. It refers specifically to storms in May, just after the cattle have been turned out into the fields from their winter quarters.