The baobab has a striking appearance – it looks as though it is standing with its branches in the ground and its roots in the air.

As Brett Westwood discovers in Natural Histories, baobabs are of enormous spiritual and cultural importance to local people as well as being a valuable source of water, food and materials.

Baobab trees live to be very old and grow to be very tall. The Sunland “Big baobab” in Limpopo Province in South Africa reached 22 metres high and 47 metres in circumference before it toppled over in April 2017. 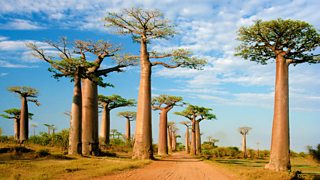 2. They are also know as “the upside-down tree”

With their huge trunks and spindly branches, baobabs look like they’ve been uprooted, turned upside down and planted again.

Many myths have arisen to explain this. In one story, God calls all the animals of the world together. They form a long queue and he gives each one a tree to plant. The hyena arrives late as usual and, being last in the queue, is given a small baobab. She is so annoyed that she takes the tree and throws it over her shoulder. The baobab lands with its branches in the ground and its roots in the air.

3. Every part of the tree is useful

As a baobab tree grows, its stem becomes hollow, allowing it to store tens of thousands of gallons of water which it can use during dry seasons. People and animals also use the water. This vital source is one reason why the baobab is also known as the tree of life.

The baobab’s canopy provides much needed shelter for people and wildlife that share the sun-scorched plains it lives on.

4. They have ugly but highly nutritious fruit

Baobab fruits contain more vitamin C than oranges, as well as being a great source of potassium, calcium, fibre and magnesium. So if you want a healthy vitamin drink then a baobab smoothie could be the answer! 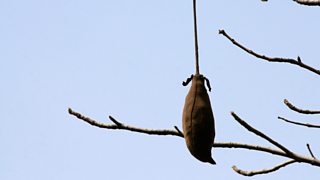 A baobab fruit hanging from a “dead rat tree”

Don’t be put off by the fruits’ appearance which is said to resemble dead rats hanging by their tails. This has given rise to another baobab nickname: “dead rat tree”.

Baobabs are late developers though – they produce their first fruits when they are around 200 years old – so you might have to be patient for your baobab smoothie!

The tree can recover from fire and drought and if the bark is stripped it will grow back.

When a baobab eventually dies, it collapses and disintegrates so that there is almost nothing left behind. For this reason some people believe it is a magic tree.

6. They’ve been used as houses and even for a flushing loo!

Huge hollow baobabs have been used as storage barns, prisons, homes, a bar and a bus shelter. A flushing toilet was even installed in a baobab tree during World War Two by Major Allan Trollope in the grounds of his residence in Namibia.

Baobab flowers are the size of saucers – measuring up to 15cm across – and open as the sun sets. They are then pollinated by moths and bats. The flowers remain alive for just 24 hours, so by the time the sun sets the next day, they are spent.