7 facts about Spiritualism in World War One

The latest season of the WW1 drama Home Front explores the unearthly appetite for Spiritualism. Interest in the movement hit its peak during the First World War. 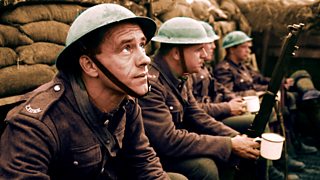 As the death toll mounted, increasing numbers turned to Spiritualism in the hope of speaking to lost loved ones.

1. Spiritualism can be traced back to 1848 New York, when the Fox sisters reported that they could communicate with the dead through ‘table rappings’.

Spiritualism has often been associated with women’s rights movements. It is estimated that today 70% of ministers are female.

3. Mediums could still be arrested under the Witchcraft Act until 1951, along with fortune tellers, palm readers and astrologists.

To circumvent this legal grey-area, many presented their ‘acts’ as entertainment.

4. In 1914, there were 145 societies affiliated to the Spiritualists National Union. 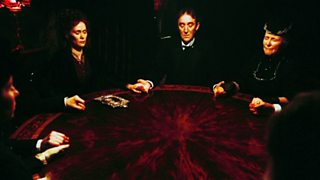 The room is 70 degrees - will there be a 'materialisation'?

5. One of the earliest examples of ghost photography was Mary Todd Lincoln, who appeared in a picture with her dead president husband Abraham in 1872.

The First World War saw the establishment of the ‘Crewe Circle’, who claimed that their cameras could capture ‘spirit extras’ of lost loved ones.

In order for ‘materialisations’ to appear, famous medium Gladys Leonard recommended that the temperature should be 70 degrees, curtains should be drawn with a low red light and that they should begin with quiet singing or a reading from the Bible.

7. There were dozens of reports of angelic beings protecting soldiers at the Front.

The most famous being ‘The Angels of Mons’ legend, which began life in 1914 as short story ‘The Bowmen’ by mystic Arthur Machen.