Should I believe headlines that say red wine is good for me?

There’s growing evidence that alcohol, even in quite small quantities, is bad for you. However, if you believe the headlines you’d be forgiven for thinking that red wine is an exception. But is this true? 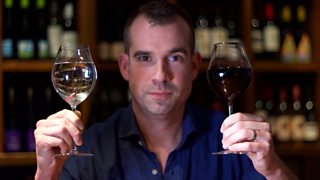 Red wine is part of the Mediterranean Diet, which consists of a range of fruits and vegetables, lean proteins and healthy fats, and is supposed to make you live longer. So is there anything in the red wine that could be contributing to the longevity of the Mediterranean people?

Red wine is made using the grape skin which contains a family of chemicals called polyphenols, and it therefore has a higher concentration of these chemicals than other alcoholic beverages, including white wine.

Of these chemicals, one called resveratrol has been studied more than most. It was known about for much of the 20th century, but it was only in the 1990s that it was discovered in red wine.

Dozens of studies have looked at whether resveratrol is good for you. Much of the work has involved giving resveratrol to lab animals; fish, mice, rats and even yeast have all been tested. But while some studies have shown promise, overall the evidence is inconclusive.

Most studies involve dosing animals with a very high concentration of resveratrol – much more than is in your average glass of red wine. In fact you would have to drink many bottles a day to get a dose equivalent to a resveratrol supplement pill. Of course, if you did this, any slight benefit from the resveratrol would be counteracted by the sheer volume of alcohol you had consumed!

Ultimately, the reason red wine has a reputation for being good for you may lie in the fact that it’s a component of the Mediterranean Diet. When drunk in moderation as part of this diet, red wine accompanies plenty of nutrient rich foods like fruits, vegetables, fish and nuts. And it’s likely that it’s all of these healthy components working in combination that leads to a longer, healthier life.