Seven tips for succeeding in life from a champion ultra-runner

In January, Jasmin Paris won the gruelling 268-mile Montane Spine Race, widely regarded as one of the toughest endurance challenges in the world.

Not only did she become the first woman to win the race, she smashed the men’s course record by a staggering 12 hours. And as if that wasn’t remarkable enough, she also expressed milk for her 14-month-old daughter along the way.

In the Don’t Tell Me the Score podcast, the British ultra-runner and vet sits down with Simon Mundie to discuss endurance, how to keep going when the going gets tough, and why commitment and cake can both contribute to success. Here are some of her insights…

Jasmin Paris talks to Simon Mundie about commitment and cake. Listen to the interview 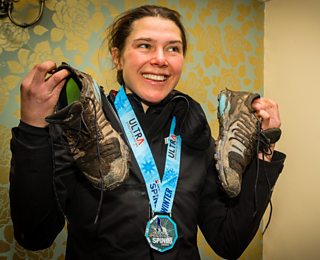 1. If you want to improve, throw yourself in at the deep end

“I didn’t start running until after university, so I was 24,” says Jasmin. In her first race she finished in the final third of the group and she remembers feeling like she had coughed up her lungs and had no oxygen left whatsoever. But she threw herself into it, pushed hard, and improved quickly.

When she joined a fell-running group she had the choice of going out with the good runners or sticking to roads with the less competitive pack and, despite the challenges, she opted to run with the best so she could run in the fells. Within six months, despite never having run more than 17 miles in training, she ran her first ultra race: a whopping 33 miles.

2. If you’re struggling for motivation, set yourself a target

After Jasmin had her baby she found it difficult to train: it was heading into autumn, her daughter wasn’t sleeping well so her nights were broken, and she was back at work, which meant training had to begin at 5am.

“I still felt that I wasn’t really back where I had been previously,” says Jasmin, “so I either needed to do something, to actively launch myself back into being really competitive, or just take a step back.” She chose not to rest on her laurels and entered a race she swore she’d never run – the Spine.

“It’s hard to get out of bed in the Scottish winter to train unless you have some sort of motivation and that’s why I signed up for the race. It was really good motivation.”

3. Ignore the barriers and go out and try

“I think I’m incredibly privileged to have been raised in a family where I was never made to feel that being a girl was any different from being a boy in terms of what you could achieve,” says Jasmin. “I’ve got three brothers but we were all treated exactly the same.”

As women we can achieve, we can do whatever we want to do.
Jasmin Paris

Her gender has never held her back as a runner or a researcher – although she is aware that barriers for women exist. “I hope that just by going ahead and ignoring those barriers and doing the things anyway, and doing them well, I can set an example to other women and maybe help other people go out there and try.”

And for any girls who don’t believe that they’re good enough, her message is simple: “As women we can achieve, we can do whatever we want to do. Just go out there and participate.”

4. When the going gets tough, keep going

“I think the mental aspect of ultra-racing is huge,” says Jasmin. “50% of what you do is in your head.”

So how does she suppress any negative thoughts and stay mentally resilient? “Being competitive helps,” she says. As the Spine Race progressed, any peripheral thoughts about home dissipated and she became completely engaged in the contest.

As Jasmin neared the finish line she was hallucinating and falling asleep on her feet – but she ate chocolate bars to pick herself up, sang out loud, and tried to remember the lyrics to a Spice Girls song in order to keep herself awake. “Those are the things you do in bad patches.”

Also, the more she runs marathons and ultras, the more she has come to realise that, in every event, “you have bad patches but you do come out of them and you’ll feel better again.”

5. Break a large task down into manageable chunks

The Spine Race is so long, you can’t motivate yourself by thinking about getting to the end, says Jasmin, “so you really need to break it down.” There were checkpoints roughly every 50 miles along the course, and she knew that when she reached one she would get the opportunity to eat and sleep. “I just really concentrated on getting to the next check point,” she says.

Jasmin used the same tactic when she was studying for her specialist vet exams: “You break it down into sections… because if you think about it all it just becomes overwhelming.”

If you don’t know where to begin, she says, “get started and then just break it into little bits. I think that if you have a big challenge that’s what you need to do.”

Being a mother, wife, vet, PhD student and an ultra and fell runner, Jasmin has to prioritise. She doesn’t, for example, have a TV.

If you really want to do something then you make time for it.
Jasmin Paris

When she was striving to achieve specialist vet status she was working weekends and doing lots of night shifts. Most of her peers would go home to eat and sleep, but she was out fell running whenever she wasn’t on call – because it was important to her.

Jasmin says she follows a healthy, balanced diet, but she doesn’t look too carefully at her nutrition or let it govern her. A cup of tea and cake are a classic treat with which to end a fell run, and she still enjoys the odd glass of wine.

The fact is, she says, “I’m just doing it because I love it. I love the running, I love being in the hills, but I also love spending time with my family, I love eating good food, it’s nice to have a glass of wine sometimes, so all these things in proportion.”

She admits that if competing started to impact on other areas of her life she probably wouldn’t relish it in the same way, and she wouldn’t be winning: “I do think that part of the success is definitely down to just the fact that I enjoy doing it.”