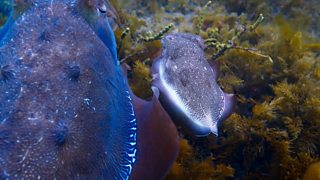 Once a year, at the beginning of the Southern winter, a bay on the South coast of Australia becomes home to the only known mass spawning aggregation of cuttlefish in the world. Over a hundred thousand giant cuttlefish, the largest cuttlefish species in the world, gather together. The larger males can reach one metre in length and 10kg in weight. At the beginning of the aggregation, males can outnumber the females by eleven to one. With so many males vying for the females’ attention, it was thought that the strongest males would ultimately decide the mating pairs, with the females having little to say in the matter.

But when BBC researcher, Katrina Steele, got in contact with cuttlefish scientist, Dr Alexandra Schnell, she discovered that when it comes to cuttlefish mating, it takes two to tango. Dr Schnell explained that female cuttlefish ultimately influence which males get mating rights. One of the ways that a female achieves this is by sending a visual signal to ward off any males that she finds unappealing. The signal is a white horizontal stripe, which is displayed along the side of her body and can be flashed within the blink of an eye. The signal tells unwanted males that she is not receptive to their advances. However, when a more attractive suitor approaches she switches off the signal and cooperates in the coupling. This fascinating behaviour, discovered by Dr Schnell in 2015, was just the kind of story the Blue Planet II team were looking to film.

In the hope of witnessing this behaviour in the wild, the BBC sent out a team to the cuttlefish breeding aggregation in Whyalla, South Australia. The team included assistant producer, John Chambers, principle cameraman, Hugh Miller, second cameraman, Alexander Vail and myself, as the resident BBC researcher. Diving into the cool water in South Australia, we were immediately transported into what can only be described as an underwater soap opera. 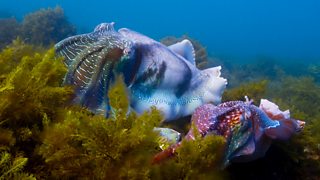 Everywhere we looked, there were huge, brilliantly coloured male cuttlefish protecting their females against intruders with all their muscle and power. We witnessed smaller 'sneaky' males trying to take any opportunity to sneak past the larger and stronger males to slip closer to a female. Small males would do this by stealth or sometimes they would go as far as drawing in their tentacles and turning a mottled pattern in an attempt to disguise themselves as females. We watched in awe as these ‘mimics’ stole females right from under the larger males’ noses.

Our challenge was to find a male and female that we could work with and film. But capturing the brief, intimate romantic signalling of a cuttlefish, proved not to be as simple as we had hoped. Using closed circuit rebreathers, the team spent many hours at a time searching for any sign of a female showing a white stripe. It was only when cameraman, Hugh Miller, swam over the top of a gathering for a bird’s eye view that he spotted a female clearly showing the signalling behaviour. This particular female was accompanied by a large male bodyguard, but the pair let us get up close and personal just as another male suitor began to approach. With a lot of persistence Hugh was finally able to capture the fascinating interactions between the female, her Goliath sized guard, and a sneaky male who in the end won his chance to mate. 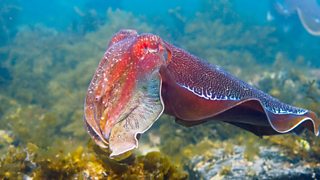 Back in the office, it was time to identify the behaviours that the team had captured between the large male and his female. Fortunately, Dr Schnell was able to join us in Bristol and with her help, we could interpret the variety of complex interactions. Following filming, Dr Schnell is hoping to analyse our footage in order to learn more about the cuttlefish. This is a wonderful example of the incredible synergy between filmmakers and scientists on Blue Planet II.