Do probiotics do any good?

Dr Chris van Tullekan sets out to discover whether probiotic products are really good for our health, and whether there’s a cheaper and easier way to get health benefits through our gut bacteria.

Every year, we in the UK spend about three quarters of a billion pounds on probiotic products, which contain live bacteria that are supposed to boost our health. Our guts – especially our large intestine – are full of bacteria, fungi, viruses and other living organisms. In fact there are more of them than there are cells in the rest of our body, meaning that what we think of as our own bodies are more bacterium than human! 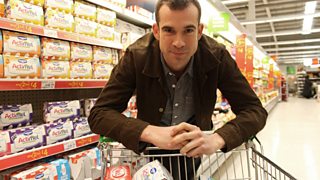 Your instant reaction might be to want to get rid of all these ‘foreign’ bodies inside us, but actually they are vital to our wellbeing. They help us absorb nutrients from our food, metabolise drugs, and educate our immune system. Our own personal mix of gut bacteria makes us the person we are, and changing what bacteria we have can affect our health.

The idea of boosting bacteria that we know are good for our health has been around for a very long time, but actual scientific research on whether it works or not is still in its relatively early stages.

In order to be able to say that probiotics definitely benefit our health, we’d have to prove that the live bacteria from probiotic products first survive being eaten and pass, still alive, through the stomach, which is highly acidic. They would then have to find a home in the gut where they could stay and breed, and would have to significantly boost the existing population there. Finally, we would have to show that they were having an actual effect on our health – and that that effect was there for a significant proportion of people. That’s a lot to prove!

Although the probiotic companies claimed such health benefits for many years, now they have changed their advertising in Europe as the European Food Safety Authority ruled that not all these pieces of evidence are yet there.

Chris meets surgeon James Kinross at Imperial College London who is studying this complex subject. He agrees that it is now known that whilst you are taking probiotic products, the live bacteria from them seem to survive the stomach and make it to the rest of the gut. However, it seems that when you stop taking them, they get flushed out of the system. He does recommend them for some of his patients who have conditions such as infective diarrhoea or irritable bowel syndrome, but he says that the evidence for them generally boosting the health of people without such conditions is lacking.

Yakult and Danone (who also make Activia and Actimel) say they stand by their health claims but comply with the law in EU. They say their claims are backed by years of research and are approved in many other countries.

It is clear, however, that our gut bacteria are vitally important to our health, and Chris investigates another branch of research in this area that is showing promise. It seems it is possible to alter the proportions of different bacteria that already live in our guts by making changes to our diet.

Our personal gut bacteria depend for food on what we feed them – in other words, what we eat. So those that thrive on the food that we eat the most of will do very well. Researchers are trying to work out which kinds of bacteria are particularly beneficial for us, and then discovering what foods we should eat to help give them a boost.

Chris meets Dr Karen Scott at the Rowett Institute in Aberdeen. She has had him trying a different diet to see what effect it has had on his gut bacteria – which she can tell by analysing his faeces.

Chris ate a very refined diet with no oats or whole grains in it at all for 2 weeks. He then had to eat 100g of oats a day for 4 weeks to see what effect it had. Karen showed that it clearly changed the proportions of different kinds of bacteria in his gut, and their research has shown that some of the species that particularly increases when people eat more oats can be very good for us. These bacteria produce chemicals which are good for our hearts and for our gut lining.

Oats also contain a soluble fibre called beta glucan, which has been shown to reduce cholesterol and have a range of other benefits, so a bowl of oat porridge could give you a double health bonus!