Celebrated journalist and filmmaker Louis Theroux has a new documentary about the notorious anti-gay religious group, the Westboro Baptist Church.

In an insight-packed interview for Beyond Today, he spoke to Tina Daheley about the risks of exploring hateful views on film, how he selects his subjects, and what it’s like to feature on some fairly odd fan memorabilia.

Here are nine things we learned…

1. A British man joined the Westboro Baptist Church after seeing a previous Louis Theroux film about the group

Louis’ latest film about the Westboro Baptist Church features an ex-postal worker who joined the group after seeing them on TV, including in a Louis Theroux documentary. 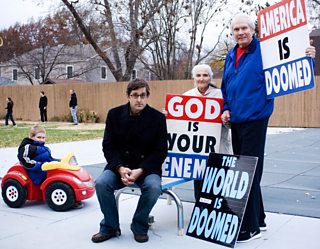 Louis Theroux with members of the highly controversial Westboro Baptist Church in 2006.

When asked how this makes him feel, Louis says his job is to counteract and challenge hateful views, showing both why they’re “wrong-headed” and where they come from. The fact that a few people will see his films and find the hatred they expose appealing is “the price you pay”.

2. He will only interview someone with extreme views if he feels confident he can hold them to account

Tina asks Louis about free speech and whether it’s acceptable to give airtime to people with racist, homophobic or abhorrent views. He says that for his shows it’s a question of how much power someone has and whether he feels able to hold them to account.

3. Members of the Westboro Baptist Church once told him he was one of the three most evil people who had ever lived

Louis recalls being informed that he was “one of the chief workers of iniquity in the entire history of man, and I was right up there with Pontius Pilate and Herod.”

He deadpans that this “in a weird way is kind of an amazing compliment... There’s a special circle of hell reserved for me. Kind of exciting.”

4. His interview technique is rooted in an open and “generous-hearted” approach

Louis says it’s important not to simply write off people whose ideas you disagree with. Instead, taking a more open approach makes it easier to present an alternative view. 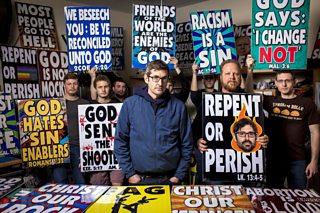 Louis Theroux returned in 2019 to the Westboro Baptist Church where members had been busy making more placards.

He says. “You just try to… listen to them and present your own position in hopefully a way that doesn’t feel like it’s ladling shame onto them or suggesting that they’re just stupid, and that takes time.”

5. He no longer feels he needs to be part of the action in order to make his shows engaging

When Louis started out, he says he felt very conscious of the need to make his programmes entertaining by taking an immersive approach to his subjects. This led to bold behaviour like being photographed naked for a documentary about the adult film industry.

Now though, Louis says that, as long as the story is interesting and he’s able to tell it in an emotionally engaging way, “grand... slightly tongue-in-cheek gestures aren’t required quite so much.”

6. He avoids topical stories and would worry if he was being “too relevant”

In his films, Louis deliberately doesn’t usually address politics or topical subjects. Instead, he says he’s interested in relationships, angst and “profound acts of self-sabotage”.

The result is that many of his early programmes are still being watched 20 years later, because “they speak to things about the human condition that are perennial.”

7. He wanted to do a programme about ISIS returnees, until the subject hit the headlines

Louis had pitched a programme about people from Britain, Australia, America and elsewhere who had travelled to join Islamic State and now wanted to come home, but it was turned down.

Then, when the British teenager Shamima Begum’s story became national news, he was offered a chance to make the show – and said no. “I don’t like that feeling of being in a media scrum,” he says.

8. He’d like to be remembered as being loved by his family

When asked what he would like his obituary to say, Louis answers, “You know, I’m not too fussed – I’ll be long gone… As long as they spell my name right and say that I was beloved by my family, that would be number one.”

9. He’s secretly excited to have lots of fans, but he tries to hide it

Of the Louis Theroux memes and memorabilia produced by his many fans – including mugs, phone cases and more – he admits: “My embarrassing part of my brain is secretly kind of thrilled by it, but I try to pretend that I don’t care… After being in TV for 25 years and the ups and downs of doing it, you never take for granted that people appreciate what you do.”

Beyond Today: Louis Theroux on responsibility.

More from Beyond Today