Being A Plus-Sized Man

“I'm a plus-sized man, that much is obvious, and contrary to popular belief, I love clothes. I love shopping, I love to feel good, I like to wear exciting patterns on my shirts. I don't just want to be wearing baggy jeans and a hoodie.” 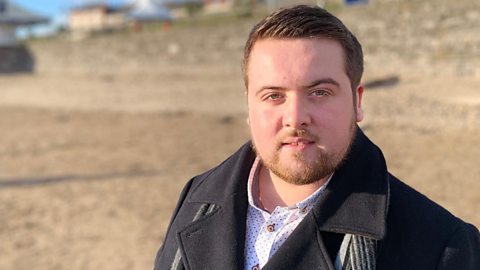 Being A Plus-Sized Man

“We can't just go into a high street store, pick something up from the rack, waltz into the changing rooms and have a mini fashion shoot. Because, quite frankly, a lot of high street stores don't cater for a size bigger than a XXL, which means men like myself, who are on the larger side, resort to online shopping, which as you know we can all do drunk, and never really ends well.

“I'm an actor, that’s my job. I've got bags of confidence, sometimes a bit too much confidence? But if I’m shopping with my friends I’ll go into a shop, and more often than not I actually won't pick anything up for the fear that it fits me like a second skin.”

Taylor has also noticed that clothes sizes can vary massively from store to store.

“And actually, while we're on the subject, why is there such a difference in sizes? You'll go into one shop, and a XXL will fit fine, excellent! I'll take five in five different colours! So then you move onto the next shop and out of nowhere they've got a XXXL, or a XXXXL, so you think, right, sorted. You take them into the dressing room and then you know, you can't actually get it over your shoulders, and then you wanna physically do a Hulk Hogan and just rip them off.

“Another thing that gets me, this is my absolute favourite, is when you go to a shop, and they do have a plus-size range. So they do a XXXL, a XXXXL... slim fit. Okay. Just so you know, a plus- size range doesn't just mean 6ft 4 bulky rugby players, it means 5ft 9 podgy actors too. So why don't they cater for us? I can assure you that enough of us exist, so selling them is not going to be an issue.”

While Taylor acknowledges he could lose weight if he tried, he feels enough isn’t done for those whose weight issues are caused by physical or psychological issues.

"Now, a lot of people are going to be saying to themselves, 'well, just lose weight!', and yeah, absolutely you're right, I don't live the healthiest lifestyle, and for me thankfully weight loss is an option. However, there are people out there who physically can't help their weight. Be it medical, psychological; eating disorders work both ways. And I feel sometimes that overeating doesn't get the same attention. So why shouldn't people who can't help it not get access to the high street like everyone else?”

Taylor shares how he feels that social media has been used to encourage female body positivity and would love to see more men doing the same.

“We live in a world heavily influenced by social media. Over the years, body positivity amongst women has been celebrated on social media. Women supporting women, and inspiring others to be themselves, which, let’s face it we all need right now. Now men, I think we can all take a page out of that book and let's start celebrating our differences.”