The Portuguese man o’war - a pain to film 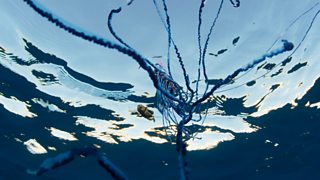 Question: How do you film a creature with invisible but highly venomous, 30 metre long stinging tentacles? Answer: Very carefully!

Portuguese man o’war are normally only seen when they turn up on our beaches, and in recent months the UK has seen a ‘plague’ of these strange creatures washing up. People keep their distance; and rightly so. The mass of tentacles trailing from the strange, air-filled bladder can stretch for 30 metres, and they are lined with thousands of stinging cells. A single tentacle is enough to kill fish, and in very rare cases, even a human. For the Big Blue episode, however, we wanted to film these sinister but beautiful creatures alive and adrift in the open ocean.

Just finding them was a challenge, they drift around the world’s oceans, pushed by wind and currents - camera team Rafa Herrero and Andrea Casini spent 3 months filming off the Canary islands in the Atlantic Ocean to capture the sequence. “Filming the Portuguese man o’war was really an achievement, you can spend days looking for them and you won’t see them” says Andrea.

Once the team found one, they had to be extremely careful, as Rafa points out:“The Portuguese man o’war is very dangerous, because all of its tentacles have small darts that inject venom”. To avoid being stung Rafa and Andrea covered themselves in neoprene and Vaseline, but they needed one hand clear to be able to work the camera. But the thin tentacles are near invisible in the water and while focusing hard through the camera, the inevitable happened, as Andrea recalls: “Despite our precautions, naturally after three months of filming, there were moments when they ended up stinging our free hand.” Rafa adds: “There are many, many tentacles, and you are only focusing on a small window through the camera, so it is very easy to get stung”. 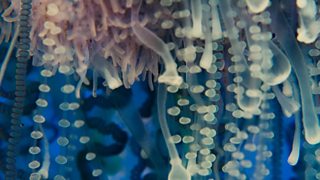 Both divers knew they were not allergic to the stings, and that they would survive but the stings can still be intensely painful. For Andrea, it was still an unnerving experience: “Once you get stung, you start to feel your heart beating really fast, you’ve got to get out of the water and head eight miles back to shore. The tentacles stick to your skin, so you have to scrape them off, and remove the stinging cells carefully and all the time they are releasing more venom. The pain can last for hours and you would do anything to make that pain go away”.

There are many traditional remedies for these stings – washing with hot and cold water and even peeing on the wound. Rafa and Andrea tried them all… “After we were stung, we tried every thing – hot and cold water, even urinating on the wound, which is thought to be a traditional treatment – but it didn’t work… It was not until we got back to shore and applied cortisone cream, that the intense pain subsided”.

Despite these unpleasant experiences, the team continued to work on this unique sequence and even designed new camera equipment – a specialist float rig, that allowed the camera to glide along side the man o’war as it is blown by the wind. They also built a boat mounted, crane so they could lower a stabilised camera to hover just above the above the waves. 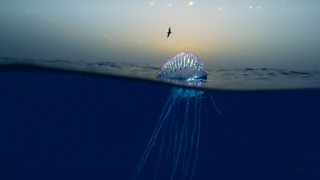 For the close up details of the tentacles, which require extremely stable environment, the crew worked with scientists to design a specialist filming-pen that could be attached to the side of the boat, allowing the crew to wait for conditions to be calm enough to film. That could also be moved onto the shore, to allow the macro camera to get the extreme close ups of the stingers. The man o’war were then returned back to spot where they were filmed – always with extreme care!

To film the man o’war at dusk, Rafa and Andrea used the float rig again, only this time with low level white divers lights. They were surprised to find the PMW had a natural ‘glow’ which scientist think could be a bioflorescence, possibly used as lure or as a by-product of the proteins that protect the PMW from its high level UV (sun) exposure in the day.

The remarkable footage that Rafa and Andrea captured is being shared with scientist in the hope it can provide further insight into these mysterious ocean wanderers. “It took over three months in the water to film the predation, It was something really difficult and a real achievement”. Andrea says. 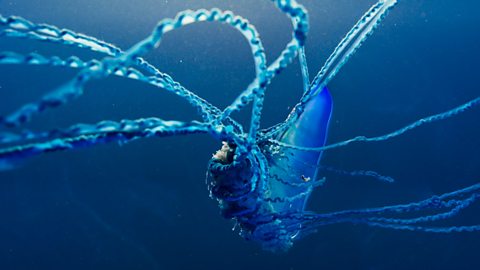 The deadly tentacles of the Portuguese man o’war

The Portuguese man o’war reduces a fish to a scaly husk.