The exciting task of filming a sequence of the wandering salamander, Aneides vagrans, in Northern California for the third episode of “Wild West” posed some interesting challenges for myself and my crew. 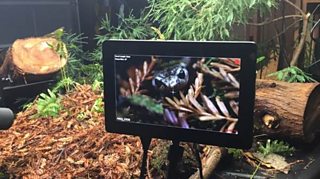 The wandering salamander is only 3 to 5 inches long, lives deep in leaf litter and narrow crevices in wood and bark and, most remarkable of all, does all this several hundred feet up in the canopy of the world’s tallest trees - the towering Coast Redwoods of northern California. To overcome this trifecta of challenges we had to use a variety of different filming techniques in order to show the real story behind the lives of these remarkable amphibians.

Timing is everything and filming could only be done in just the right weather conditions when the redwood forest is moist from seasonal rains and the canopy bathed in fog. These are just the conditions the wandering salamander, like most amphibians, needs to be most active. This also meant many days of dodging too much rain to film in or too much sun. Weather always seems to be a fickle partner for wildlife film makers.

We then needed to find some stars to work with. Because the wandering salamander is so secretive and not least because it is often several hundred feet off the ground it would be impossible to film them purely in the wild. The redwood forest itself is fragile, and rightly there are strict regulations to work within this habitat. So we worked closely with the experts and scientists directly involved with studying the salamanders. They were able to provide some research specimens for us to film, and would handle the salamanders when needed to ensure their well-being throughout the filming.

The crux of the story of course is that these amazing little critters live hundreds of feet up in the redwood canopy where leaf litter and soil accumulates and the microclimate allows ferns and other vegetation to flourish. These so called “fern mats” provide a unique habitat for many forest creatures and we wanted to be sure to find a way to take the audience up into their realm. 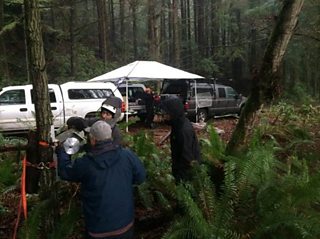 The crew working in the Coastal Redwood Forest, Northern California.

We really wanted to get right down into the salamanders' world... Close enough to look them in the eye.

To achieve this we used our cable camera system that allowed us to “fly” the camera up through the canopy. It took a team of 5 people, including specialist redwood researchers, working with special access permits, to rig up the ropes and cables in the tree. However by using this technique we were able to operate and control the camera and camera dolly from the ground which allowed us to minimize any possible impact to the trees.

As dramatic as this perspective is though it doesn’t truly show the scale of the world up there for these little salamanders. So we had to find a way to film the salamanders themselves up in the trees. Using a specially constructed camera mount that could be suspended from ropes and hang next to the giant redwood limbs we were able to do some more traditional style filming of the salamanders wandering among the fern mats. But these are small little creatures. Filming suspended from ropes high up in a moving tree would only enable us to get so close before the images are just too unsteady to see.

We really wanted to get right down into the salamanders' world. Close enough to look them in the eye, to see their specialized feet, adapted for climbing and their arboreal lifestyle and to see the fine details of their bodies and skin that make amphibians so unique. And to get a sense of how the world of a fern mat looked to them.

To do this required our third approach.

Using natural materials we built an exact replica of a fern mat in the studio. Able to control the light and climate to perfectly suit the salamanders we were then able to use more traditional macro lenses and techniques to film them up close and personal and experience their world as they see it. We could also use our motion control system to travel along through the fern mat with the salamander joining in its journey from forest floor to high in the redwood forest canopy. A remarkable feat for such a diminutive little creature so perfectly adapted to such a unique niche.

It was a real privilege to film – hard work but immensely satisfying to see all the elements come together, and to reveal the secret life of the wandering salamander.