Vitamin D also known as the sunshine vitamin is in the news a lot these days. We know it’s essential for healthy bones, but low levels have also been linked to a range of conditions from heart disease to cancer (although in many of these cases, it is not known whether it’s the low levels of the vitamin that have caused the disease). 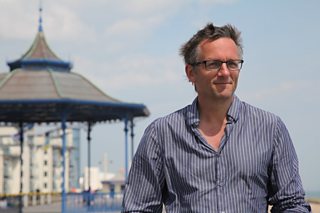 Research suggests that around half of adults in the U.K. don’t have adequate levels of vitamin D, so what’s the best way to boost those levels? Michael Mosley, with the help of Professor Helen Macdonald from the University of Aberdeen, put three recommended sources of vitamin D to the test.

We recruited volunteers from staff who work in an admin office at the University of Chichester. Despite living in the sunniest part of the country, they seemed to be typical of the UK population as a whole: fewer than half have adequate vitamin D levels and two were at risk of vitamin D deficiency. They were split into 3 groups...

All of the volunteers wore special devices to measure their sun exposure during the experiment – so that this could be factored in when their vitamin D levels were measured.

After three weeks of going out in the sun/ eating oily fish/ taking supplements, the volunteers had their vitamin D levels measured again to see how they’d changed.

The body makes its own vitamin D from UVB rays (light with a short wavelength) which hit the skin. It’s not possible to make too much vitamin D from the sun, as the body self-limits the amount it produces, but it’s very important to avoid burning. For the majority of the population the government recommends 10 minutes outdoors in the sun, between 11am and 3pm, with arms and legs exposed. The wavelengths that stimulate the production of vitamin D do not pass through glass, so you must be outdoors. In the U.K. it’s only possible for our bodies to make vitamin D in the summer: between the months of October to March the angle of the sun is too low for enough UVB to reach the earth’s surface and we have to rely on the reserves of vitamin D that our body has stored up during the summer months or from other sources.

Vitamin D supplements are recommended for people who don’t get much sun and are available to buy over the counter. It’s important to check how much vitamin D the tablets contain as they vary and it’s advised not to take more than 25 micrograms (µg) or 1000 IU (International Units) of vitamin D a day. Taking more than this could be harmful (according to the UK Expert Group on Vitamins and Minerals). Current NHS guidelines state that certain groups might be at risk of deficiency and these individuals should supplement with a daily vitamin D supplement. Some people in high risk groups may be able to receive free supplements.

Vitamin D is also found in some foods, notably oily fish. But the amount in oily fish varies considerably depending on the species, whether the fish is farmed or wild and how it has been cooked. The table below shows the amount found in different fish. The fish with the highest vitamin D content is raw herring, followed by canned sardines in brine and oil, and then wild salmon.

The dietary recommendation for people who don’t get sun at all is 400 IU a day (10 micrograms). It’s possible to get 8-9 mcg from a portion of oily fish. Some cereals, drinks and spreads may have vitamin D added in small amounts (but read the label to work out how much as amounts can vary).

Vitamin D is fat soluble - it’s stored and transported alongside fat molecules. This means that if you cook oily fish in oil, e.g. shallow or deep fry, then some of this vitamin is lost into the cooking oil. To ensure you keep the vitamin D in the fish its best to avoid cooking with fat and bake or steam the fish instead.

At the end of the experiment vitamin D levels increased in all three groups by roughly the same amount. The two volunteers who were at risk of deficiency experienced the greatest increase: their levels were almost back to normal! Our results demonstrate that all three methods - sunlight, supplements, and fish are effective ways to increase vitamin D levels. But which one you choose depends on several factors.

Sunlight is free! However, the downside is you have to ensure you get the right kind of exposure so as not to increase your risk of skin cancer: don’t get sunburnt.

Oily fish is a good source of vitamin D (and other nutrients) but you don’t want to eat too much as there are concerns about contaminants in oily fish. In 2004 the government released advice stating that girls and women of child-bearing age shouldn’t have more than two portions of oily fish a week.