Back in Black: How actor Paul Kaye became Terry Pratchett

Beloved author Terry Pratchett was resurrected for Back in Black, an imaginative and award-winning docudrama available now on BBC iPlayer. BBC ARTS spoke to director CHARLIE RUSSELL about bringing the great man back to life with actor Paul Kaye.

When director Charlie Russell was asked by the BBC to make a film celebrating Sir Terry Pratchett's life, he knew that a standard 'talking heads' documentary just wouldn't wash. How did he know this? Russell had already made three documentaries with Sir Terry: Living with Alzheimer's, Choosing to Die and Facing Extinction.

I knew that he'd hate the idea of a film full of people saying nice things about him.
Charlie Russell, Director

"I got to know him over a long period of time and we came to care for each other. As his illness progressed and it got harder for Terry to do certain things, we had built up a trust and I felt I had developed a real sense of who he was."

Terry Pratchett was diagnosed with Alzheimer's disease in 2007, and in the opening minutes of the film we see Terry's assistant Rob attempting to record Terry's memoirs, with Terry finding it difficult to form coherent sentences. Terry sadly died from his illness on 12 March 2015.

"I knew that he'd hate the idea of a conventional film full of people saying nice things about him. He would have wanted to do things differently, to come back and be in his own documentary. And because we couldn't do that, the next best thing was to get an actor to play him", Russell explained.

With the blessing of Terry's family and close friends, Russell started the process of finding 'their Terry'. Initially they were looking for a Pratchett fanatic, but ultimately the actor they found had never read a Pratchett book in his life.

Paul Kaye was keen to meet up to discuss the project, after a number of actors had been contacted. 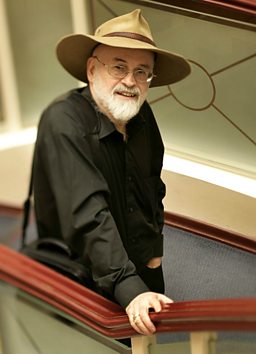 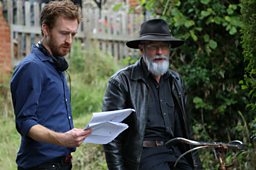 "He told me he'd been watching loads of Terry clips online and that he found him absolutely fascinating. During the course of that meeting Paul became incredibly enthusiastic. He really wanted to do Terry justice and from then on he threw himself into the project."

It was uncanny. We all just felt like Terry had walked back into our lives.

The sections of the film with Paul were shot over three days and Russell remembers when Paul, newly transformed into Terry, arrived on set:

"It was uncanny. We all just felt like Terry had walked back into our lives."

"Once he had got a sense of who Terry was, Paul was full of ideas on how to make certain sequences in the film more 'Terry'. One idea was for the scene we were shooting at Terry's old school. Paul thought it would be fun to dress up in a school uniform - grey flannel shorts and all." 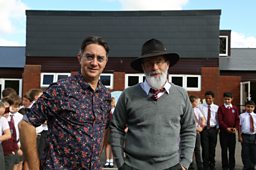 An aspect of the production that pleased director Charlie Russell was the use of genuine locations from Terry's life. Filming took place in his home study, at his former school, at the newspaper office where he used to work, and in the observatory that Pratchett had built in his garden.

Filming took place in hishome study, at his former school, at the newspaper office where he used to work, and in the observatory that Pratchett had built in his garden.

"We made the film with the blessing of, and in collaboration with, the Terry Pratchett estate and they really bought into the idea. Terry's assistant, Rob Wilkins, allowed Paul to wear Terry's jacket, his shirt and even his hat."

In 2011 Charlie Russell filmed Sir Terry Pratchett on his journey to the Dignitas clinic in Switzerland to investigate assisted suicide first-hand. That film, Choosing to Die, went on to win an International Emmy for Best Documentary.

Terry Pratchett: Back in Black is an authentic telling of the life of one of Britain's great writers. It is available on BBC iPlayer until 14 February 2020. 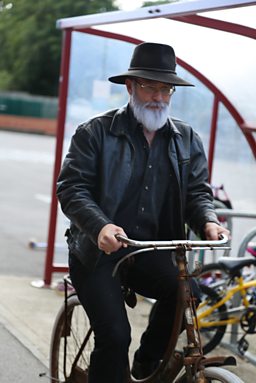 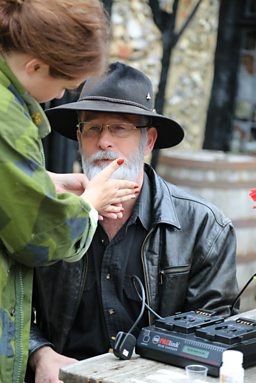 Paul Kaye as Terry. "Paul looked incredibly like Terry except when he would have a fag hanging out of his mouth. That is definitely not a Terry thing", says Charlie Russell 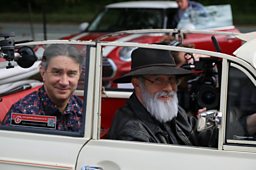 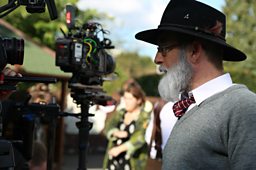 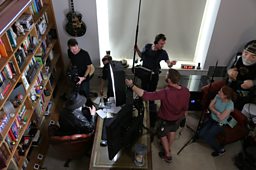 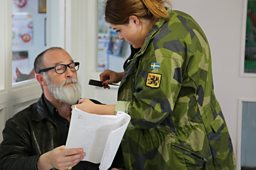 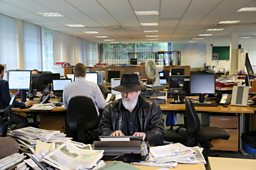 A version of this article was originally published in February 2017.