The 2016 Edinburgh International Festival is celebrating the influence of Shakespeare and re-interpretations of his work, to mark 400 years since his death.

We'll be taking a closer look at three productions from countries which historically have embraced Shakespeare's works; France, Russia and Germany.

Opening at the festival on Thursday 11 August is 'Shake', a delirious French-language pop-theatre rethink of Twelfth Night from British-born director Dan Jemmett and his theatre company Eat a Crocodile.

Viola loves Orsino, who loves Olivia, who has fallen in love with…Viola, disguised as a boy.

Reimagining Shakespeare’s Illyria as a seaside holiday resort from the 1970s, complete with ramshackle beach huts, Shake is a delightful rethink of Twelfth Night from British-born director Dan Jemmett and his French-based theatre company Eat a Crocodile.

Dan Jemmett’s playful, poetic production takes audiences back to the seaside of the 1970s, as Feste the clown breaks out his vinyls of Herb Alpert and Geoff Love on his vintage turntable, and five actors frantically slip between the play’s 18 roles in a farcical mix of music hall, pantomime and vaudeville, where boys play girls playing boys playing girls.

Director Dan Jemmett has been widely acclaimed in France and abroad. He has worked at the Théâtre National de Chaillot, Théâtre de la Ville, La Comédie-Française and at Peter Brook’s Théâtre des Bouffes du Nord. Shake was premiered in Lausanne in 2001, and won the 2002 French Critics’ Prize for New Theatre.

Shake runs at the Lyceum theatre from 11-13 August as part of the Edinburgh International Festival 2016. 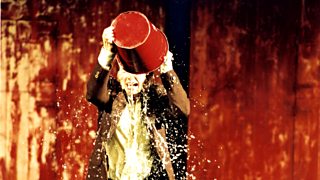 Performed in French with English supertitles.