Margaret Mountford: lawyer, businesswoman, tv presenter and, most recently, a doctor in Papyrology. 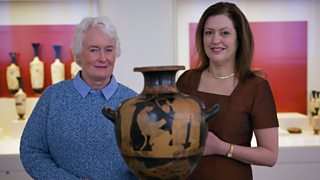 Sappho was one of the few women celebrated on Greek vases

When the "new papyrus" was discovered in 2012, after lying unread for over 2000 years, Margaret admits she didn't know much about Sappho. Apart from of course that she was an Ancient Greek poet, with a strong association to a small Aegean island.

However, while presenting a new BBC Four documentary 'Sappho: Love & Life on Lesbos with Margaret Mountford' Margaret meets the academics who dedicate their life work trying to piece together as much information as they can about the enigmatic poet.

Further afield, Margaret visits the island where Sappho was born, lived and loved: Lesbos. There she meets the residents who idolise the poet and her attitude to love and life.

Reflecting on her expedition Margaret answered a few questions about what she learnt...

When did you first come across the works of Sappho?

I can’t remember when I first heard of Sappho; seems I have always known that she was a very early lyric poet who wrote love poetry addressed to women. As did millions of people who weren’t even interested in Classics and the Classical or pre-Classical world.

But I’ve never been interested in lyric poetry (when I studied Classics I focussed more on history) and I didn’t actually read any of her works/fragments until the “new papyrus” was published last year.

How did you first get involved with the documentary?

I was approached by Maya Vision (the production company) to consider presenting a series based on papyrus finds and this is (I hope!) the first. 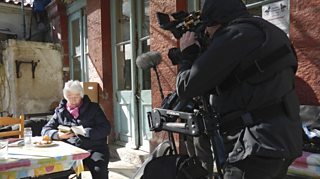 Margaret in a little bar in Moria, Lesbos.

And the more involved I got the more interested I became in the contrast between how little we actually know about Sappho and how much has been projected onto her over the centuries.

What is it about Sappho's (surviving) poetry that makes her still relevant more than 2500 years after her death?

First, she was a woman poet, and although there were a few others around the same period she is by far the most famous and the one whose works survived the most (although very little, of course).

Second, the fact that some of her poetry is love poetry addressed to women means that became notorious; while that may have been one of the reasons why so little of her works survived (being considered “unsuitable” for education in Christian times, for example), it is undoubtedly the reason why she became a lesbian icon and is so well-known today.

But scholars would say the poetry survived because it is so good, because of the way she expressed feelings and emotions succinctly and exactly (and poetically) in a way that was unique for her time but timeless. Sappho also influenced Horace and Catullus and through them the whole chain of western love poetry.

Some more fragments of Sappho’s poetry have recently been unearthed, what have scholars learnt about Sappho that they previously didn’t know?

It tells us a bit but not as much as we would like! And of course you can’t assume that what she is writing is fact and not imagination. 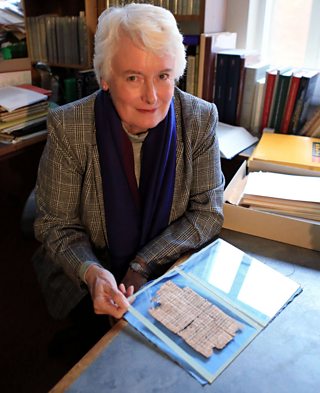 Margaret with the "new papyrus" in Oxford

But it shows first of all that a woman from, what we would call, an aristocratic background could be a singer in 7th/6th Century BC Lesbos without having to be categorised as a school teacher on the one-hand, or a high-class hooker on the other.

And it challenges our ideas (which are obviously over-influenced by classical Athens) about the role of women in the ancient Greek world. She shows it’s wrong to assume that what held good in 5th century BC Athens applied to the eastern Aegean 200 years before.

The finds have clarified where some of the fragments discovered earlier fit and some readings have also been confirmed. The main discovery has been nearly one whole poem which mentions her brothers, Charaxos and Larichos, by name.

It also shows that the source for what Herodotus tells us about Charaxos, spending a fortune on a famous courtesan in Egypt, was probably poems like these which were well-known among educated people at the time.

What was your personal highlight while filming?

Seeing the papyrus which contains the new “Brothers” poem; very clear in some places and tantalisingly obscure in others. And hearing the results of the scientific testing to show its date and how that confirmed some readings but changed others.

For anyone who has watched the documentary and wants to continue learning about Sappho, could you suggest any ‘further reading’?

Margaret Reynolds' book, The Sappho Companion, is a great place to start for a non-Classicist. It's an anthology showing how Sappho has been envisaged and re-created to suit the times.

For the poetry appreciation, I would recommend, Anne Carson’s If Not, Winter: Fragments of Sappho. Her brilliant translations bring Sappho’s verses alive today and can be read alongside the original Greek.

In Our Time: Sappho

Listen to Radio 4's In Our Time episode on Sappho. 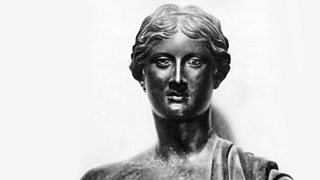 Melvyn Bragg and his guests discuss the life and poetry of Sappho.