• 25-year-old Celeste Waite has already been tipped for big things, winning both the Brits’ Rising Star Award and the BBC Music Introducing artist of the year.

• Born in Los Angeles but raised in Brighton, she grew up listening to jazz and soul greats like Ella Fitzgerald, Otis Redding, Billie Holiday and Aretha Franklin.

• She wrote her first song, Sirens, at the age of 17, in tribute to her Jamaican father, who had died of lung cancer a year earlier; and Lily Allen released her first EP, Milk & Honey on her Bank Holiday Record label.

• Now signed to Polydor, Celeste has been praised for her “timeless” songs and emotional, storied lyrics. She says her goal is simply to “be able to make music for a long time, and music that actually matters to people.” 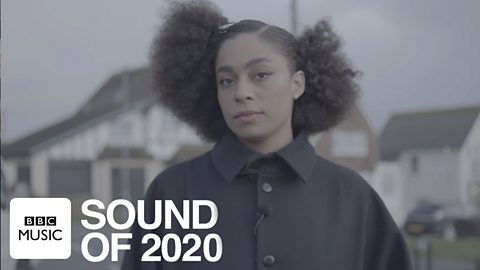 Celeste talks about her hometown Brighton, her influences, and duet with Paul Weller.

Celeste's journey to the Sound Of 2020 Shortlist in her own words and pictures... 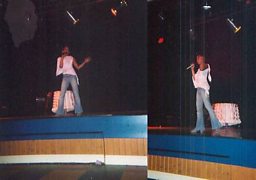 I think this may have been at a singing competition on one of those classic “English summertime” holidays, maybe Haven or Camber Sands, haha! Either way I was prepared, I put on my sparkliest one shoulder top and sang my 9 year old heart out to the tune of Shirley Bassey’s “Big Spender”. 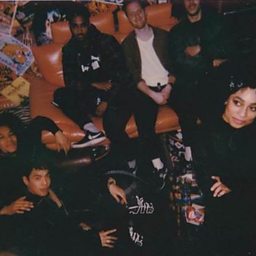 Me and my band, whom I love so much, after playing our first show together in February 2019 at the Lexington for BBC Introducing and it was also the first time I ever performed “Strange”.

Going on Jools Holland a moment I will never forget, I remember feeling very nervous when I arrived, but was soon put at ease by all of the wonderful people around me.

Falling onto the sofa of London nightclub Laylow after a month long residency, this was after my last show of many, a moment of ecstasy and relief that everything had gone to plan.

• The quintet formed “on a whim” in a pub two years ago, after spending several years scattered around other bands in the city.

• Frontman Murray Matravers was raised on his parents’ farm, and spent his formative years tending to chickens and picking potatoes.

• His lyrics discuss everything from insomnia (“Nightmares”) and money problems (“Pockets”) to love gone awry (“Frank”). 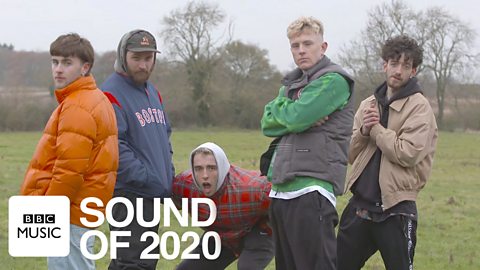 Easy Life open the doors to their studio and the farm where frontman Murray grew up.

Easy Life's journey to the Sound Of 2020 Shortlist in their own words and pictures... 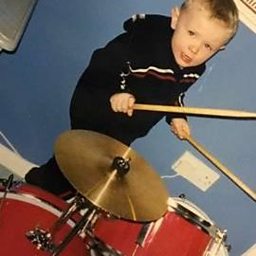 Cass age 3 at home in the house he grew up in starting his very own band in his playroom. 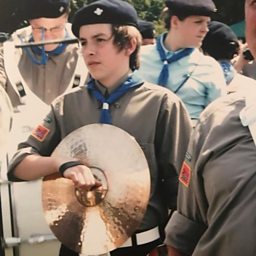 Age 12, on parade for Remembrance Sunday, Lewis learnt how to play the drums in a marching band before going on to pick up a guitar.

A sold out UK tour in October 2019, we had to get a picture at Rock City in Nottingham, it just felt right.

• Hyperactive, outspoken and boldly vulnerable, Yungblud is challenging the definition of what it means to be a rock star.

• Born Dominic Harrison, the 22-year-old isn’t afraid to sing about gun control (“Machine Gun”) and self-hatred (“Original Me”); over a collision of hip-hop beats, jetstream guitars and unassailable pop melodies.

• He often takes to the stage in a dress, telling the NME: “Boxes are for cereal. Labels are for clothes. We are human and the need for division is becoming less relevant every day.”

• The singer’s fans call themselves The Black Hearts Club, based upon two heart-shaped tattoos on his middle fingers (one complete and one broken).

Yungblud speaks to BBC Music about his fans, success, and what Yorkshire means to him... 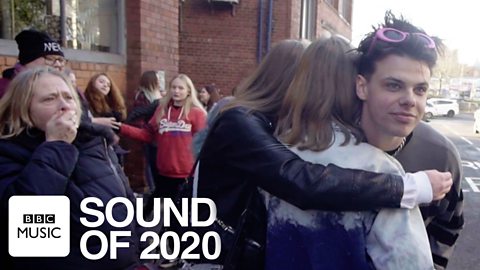 Yungblud speaks to BBC Music about his fans, success, and what Yorkshire means to him.

• The first record Joy Crookes remembers owning was The Clash's London Calling – and the band’s musical inquisitiveness and celebration of London’s diversity remain touchstones for her own music.

• Born in London to a Bangladeshi mother and an Irish father, she was exposed to a huge range of music as she was driven to her weekly Irish dancing lessons. “My dad wanted to give me a real education. From Nick Cave to King Tubby to all this Pakistani music,” she says. “He’d say, ‘This is from your ends of the world, you should hear this.’”

• After teaching herself piano, bass and guitar, she started writing her own music in her teens, inspired by the "mad honest" lyricism of Amy Winehouse and Lauryn Hill.

• Her honey-dipped vocals and relatable lyrics have soundtracked several viral videos, from the cover of Hit The Road Jack that got her a management deal, to a stripped-down BBC performance of Don’t Let Me Down that became one of the most-talked about TV moments from this year’s Glastonbury Festival. 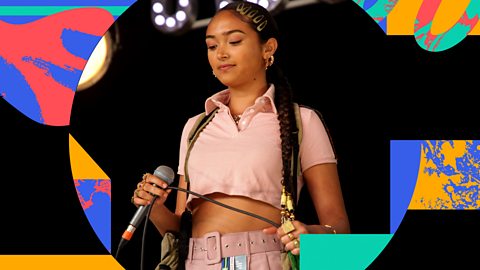 • Inhaler were formed by school friends Elijah Hewson, Robert Keating, Ryan McMahon and Josh Jenkinson, who bonded over their love of bands like Joy Division, The Strokes, The Stone Roses and The Cure.

• If you notice something familiar about Eli’s soaring, searching vocals, that’s probably because his dad, Paul, is better known as U2 frontman Bono.

• “For me and for us as a band, we’ve known that there’s going to be doors open,” he told the NME about his family connections. “But those doors will shut just as fast as they open if we’re not good.”

• But rather than trade on his dad’s name, Inhaler have grafted hard, playing tiny pubs and clubs and building up a loyal following for the scrappy post-punk melodies of My Honest Face and Ice Cream Sundae.

Inhaler's journey to the Sound of 2020 Shortlist in their own words and pictures... 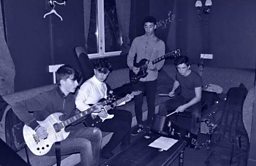 This photo was taken on the day of Josh’s first gig and the start of Inhaler. We looked even more clueless on stage than we do in the photo. 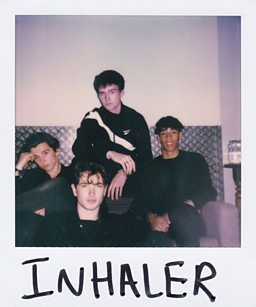 Polaroid from our first headline show in the upstairs part of Whelan’s in Dublin on the 8th of September 2018. That was one of the first times we saw a few faces in the crowd other than our friends and that excited us a lot. 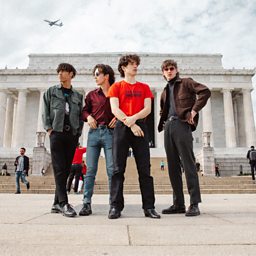 Since we were starting out it’s always been Inhaler’s dream to go to America. In November 2019, we got to join our friends Blossoms for some shows around the US. It was as surreal as you’d imagine and we still haven’t gotten over it. 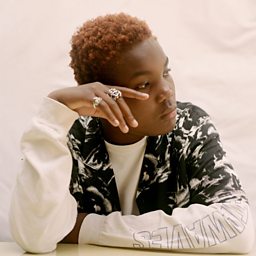 • “In my age group, there’s a lot of prevalence of mental health [problems], being self-destructive, and quite hopeless,” she told Line Of Best Fit. “I’m not sure if it’s social media, or what it is, but we’re all sad”.

• Raised in Hammermsith, West London, she says she was a “loner” who found solace in poetry and literature, before setting her own words to music.

• Her laid-back sound has been compared to everyone from Cocteau Twins and Leonard Cohen to Frank Ocean and A Tribe Called Quest; but Park says: “I’m just an Internet kid… doing my own thing.” 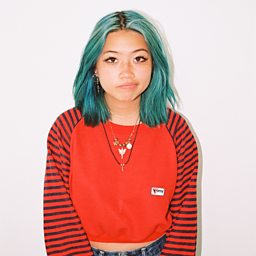 • Beabadoobee is the stage name of 19-year-old indie musician Bea Kristi, who built a huge online following while revising for her A-Levels.

• Born in Manilla and raised in London, she was inspired to make music by Kimya Dawson's soundtrack for the coming-of-age comedy Juno.

• She wrote her first song, a melodic, lo-fi ballad called Coffee, in 2017, after her dad bought her a second-hand guitar. When a friend uploaded a muffled recording to Spotify, it received hundreds of thousands of plays within days.

• She’s since been signed to Dirty Hit - home to The 1975 and Wolf Alice – with whom she’s released three well-received EPs that channel the chiming ‘90s indie-pop of Belly and The Lemonheads. 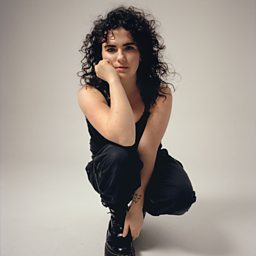 • Producer, songwriter and beatmaker Georgia Barnes has been going to Glastonbury since she was seven years old – not least because her dad is Neil Barnes, co-founder of dance icons Leftfield.

• The 29-year-old started out as a session drummer for artists such as Kate Tempest and Mica Levi before striking out as a solo artist in 2015.

• Inspired by the propulsive hedonism of Chicago house and Detroit techno; her self-produced club single About Work The Dancefloor took up permanent residence on Radio 1 earlier this year.

• The song, a sort of second cousin to Robyn’s Dancing On My Own, proved so successful that the release of Georgia’s second album, Seeking Thrills, was pushed back by nine months. “A lot of artists would probably find it quite frustrating,” she told The Guardian, “but I’m always writing new music, so I was like, ‘yeah!’” 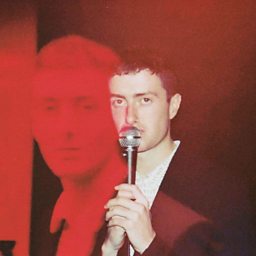 • The singer, who grew up in the Glasgow “ghetto” of Garthamlock, only goes by his first name: “kind of like Cher, or Shaggy,” he told the NME, “but not as cool.”

• The soul-baring pop songs of his debut EP, Play Me Something Nice, document the catastrophic break-down of his first relationship. “We were still sleeping together,” he told BBC Scotland. “It was like that grey area - it was a horrible situation to be in. I was still in love.”

• The singer has been open about his bisexuality, telling Vogue: “I’ve been with girls, I’ve been with boys. I feel like now is the best time to be that kind of person. In Glasgow, people are more likely to slag your shoes than your sexuality.” 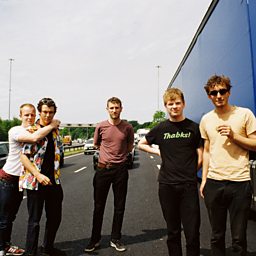 • All angular guitars and scowled vocals, Squid started life as a “really bad” jazz band before settling on their current line-up.

• The Brighton-based band have been called “one of Britain’s most energetic new live guitar bands”, by the Guardian, and “the weirdo-punk band making the avant-garde accessible”, by the NME.

• “We’re only a year in properly and I don’t think anyone can tell what it’ll sound like in years to come,” keyboardist Arthur Leadbetter told DIY magazine.