Quentin Blake on working with a big friendly giant

Sir Quentin Blake's instantly recognisable drawings are most familiar from the pages of Roald Dahl's tales. Their working partnership was, however, not an instant success. NICOLETTE JONES caught up with Blake at his studio for a deeply personal insight into working with the great writer.

Sir Quentin Blake's relationship with Roald Dahl began with a handshake in a publisher’s office, when half a dozen of Dahl’s books had already been published in the UK and illustrated by other people. For the first two books Blake worked on, The Enormous Crocodile and The Twits, the interaction between author and illustrator was slight. One exchange of messages led to several versions of Mr Twit’s beard, as Dahl reminded Blake that it “grew in spikes that stuck out straight like the bristles of a nailbrush”. 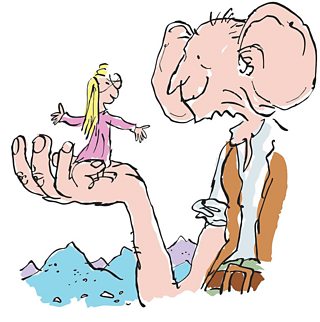 The BFG as drawn by Sir Quentin Blake

It was with the drawings for The BFG that a friendship began. The first two sets of illustrations for the book were rejected by the author – because there weren’t enough of them. Blake went to visit Dahl in his home, Gypsy House, at Great Missenden, a Buckinghamshire village northwest of London, which now houses a museum that celebrates Dahl and his creations.

There, as they discussed what pictures should accompany his text, Blake saw Dahl with his family, and identified a connection between Dahl and the BFG. Both were “tall men who put dreams into the heads of children”. He witnessed the interaction between Dahl and his granddaughter Sophie, after whom the little girl in the story was named, and it prompted Blake to re-think the character of the giant. At first he had been drawn like a clown, with a comic face.

“I got a sense of a greater dimension to the character than I had previously. The human side of him.” The new BFG was gentler. Blake’s illustration was no portrait of Dahl (who was not wrinkly with huge ears) but it was grandfatherly. “The Twits was a very black story, with vicious humour – which has made it a favourite with children. But The BFG has got mystery and wonder in it,” says Blake. “It’s much more sympathetic. It’s actually about a relationship.”

Blake is not possessive about his own version of Dahl’s characters. He feels about The BFG, he tells me in his West London studio, “a certain hint of ownership, having been there at the beginning, so to speak.” But illustrating or adapting a book is, he says, “like directing a play, or playing a piece of music.” The script or the notes are there, but the interpretation can be various. 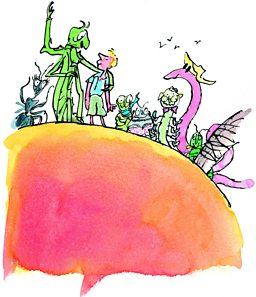 James and the Giant Peach, drawn by Quentin Blake

There was also, famously, much discussion about what the BFG should wear. He originally appeared in a workman’s leather apron, with wellington boots, but Dahl noticed that the apron “got in the way”. A waistcoat was introduced instead, but footwear continued to be in question until one day Blake received a parcel in the post. It contained one of Dahl’s old sandals.

Roald Dahl in his writing hut, at the bottom of his garden in Buckinghamshire

One day Blake received a parcel in the post. It contained one of Dahl’s old sandals

There were ten more collaborations – including Matilda and Esio Trot - before Dahl’s death in 1990, after which Blake felt familiar enough with the spirit of his friend to return to the first six books and re-illustrate them. So, for instance, he found the serenity of Matilda on his own. She was drawn repeatedly, until the face of the child who was written as aged four or five became older – to accommodate “not her intelligence exactly, but her magic powers”. The sly spryness of Willy Wonka was also Blake’s own visualisation. “I drew Willy Wonka like a sprite because everything that happened inside his factory was unreal, like a fairy tale.”

When we talk of Esio Trot, the last of Dahl’s books that Blake illustrated in his lifetime, having no sense at the time that his friend’s death was imminent, I look at the little balcony onto which the French windows of Blake’s studio open, and think of Mr Hoppy. Blake’s balcony is small and overlooks a garden square but it does have plants, and I could imagine a Mrs Silver downstairs. 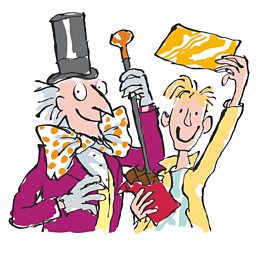 "I drew Willy Wonka like a sprite because everything that happened inside his factory was unreal, like a fairy tale." 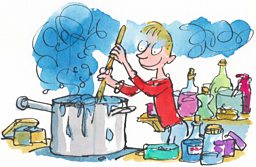 Blake’s studio is cluttered not with tortoises but with books and materials, and plan chests to store pictures, with one trestle table covered in drawing instruments and colours, and one clear space, a large light box, on which Blake works. 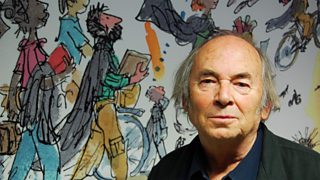 I make it all up, and you do that by feeling that in yourself. People in my drawings do energetic things I never do, but I can sort of imagine what it feels like to do them

He draws daily, working alone and not wanting to be observed – although in public he draws for audiences with astonishing speed and skill. He has been told – on the rare occasions that a spectator was present – that when he concentrates, he makes the faces of the characters he is drawing.

He likens the activity to acting, which he enjoyed at school and in the army. Blake does not draw from life. “I make it all up, and you do that by feeling that in yourself. People in my drawings do energetic things I never do, but I can sort of imagine what it feels like to do them.”

Illustration, more than writing, he thinks, can be “quite removed from your own experience”, but as you inhabit and depict the physical “it is related to your own anatomy”.

Blake, who was Head of Illustration at London’s Royal College of Art, did not himself have formal art training. He studied English literature at Cambridge University, but he has drawn all his life – at the age of 16 he had a cartoon accepted for publication. He learned partly by looking at draughtsmen he admired, such as Honoré Daumier and George Cruikshank, or the cartoonist André Francois. He has also found inspiration from books (other than Dahl’s), plays and films.

His sources are eclectic and international. He cites the influence of Joseph Conrad on his picturebook The Green Ship. And of Ionesco on Zagazoo – in which childhood involves transformations into, for instance, a fire-breathing dragon and a little elephant (compare the transformation in Ionesco’s Rhinoceros). And Jean-Louis Barrault as the mime in Les Enfants du Paradis inspired Blake’s wordless picturebook Clown.

It is not surprising that a man with such openness to ideas from abroad produces work that is enjoyed in so many countries. Like Roald Dahl’s BFG, he travels a long way with ease.

Quentin Blake: Inside Stories, a free exhibition co-curated by the illustrator and Claudia Zeff for the opening of House of Illustration, the UK’s centre for the art of illustration, opens on 16 July and runs until 20 November at the National Museum Cardiff and forms part of the Roald Dahl 100 Wales celebrations taking place throughout 2016.

James and the Giant Peach, drawn by Quentin Blake

Roald Dahl centenary on the BBC