The big experiment: how can I get my body to burn more fat, without doing more exercise?

Our bodies use two main types of fuel: fat and carbohydrates – and most of us wish we could tell them to burn a bit more of our fat reserves! 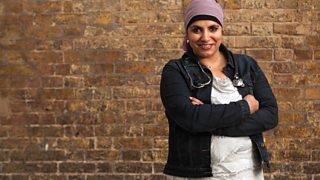 Well, some new research suggests that there is a way, just by timing when we eat with when we exercise.

We heard of a laboratory test done by Dr Adam Collins of the University of Surrey which suggested that the amount of fat we burn changes based on whether we eat before or after exercise – and that this seemed to be different for men and women.

If he’s right, it might be possible to change our eating habits around exercise to increase the amount of fat our bodies are burning throughout the day – so we decided to do a big experiment to help find out.

We repeated this experiment on a single brother and sister pair, Jess & Josh, and got similar results.

In order to see whether this effect measured in the laboratory could actually be significant in the real world, we teamed up with Adam and his research group to recruit 30 volunteers to take part in a longer term experiment.

We took 13 men and 17 women who did not normally do a lot of exercise, and for 4 weeks they all took part in a 3 supervised classes a week: high intensity training, Zumba and spin classes. All of them had a drink both before and after each exercise class, but one of their drinks was a placebo (had no calories in it), whilst the other was a carefully calorie-controlled hit of carbohydrate. No one knew who was taking which drink when.

At the beginning and end of the experiment, we tested how much fat they were burning whilst at rest (as well as a range of other measures such as weight, waist circumference and blood sugar/fat levels).

Whilst all the women ended up burning slightly more fat at the end of the experiment, those who were taking carbohydrates before their exercise were burning more. 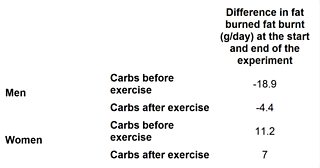 Meanwhile, all the men were actually burning slightly less fat at the end of the experiment, but those who were taking carbohydrates after their exercise were better off.

We saw no significant differences in their weights or waist circumference, but their blood sugar levels changed in the same way as their fat burning.

Men and women burn fat and carbohydrate in different ways.

For women, the results clearly show that eating before they exercise is better than eating after if they want to burn fat. Women’s bodies tend to burn fat more easily than men’s, and are not fuelled so much by carbohydrate. Moreover, women are much better at conserving carbohydrate during exercise. So when women eat carbohydrate soon after exercise, this is effectively overloading them with fuel, and interferes with the body’s ability to burn fat.

Although our study was quite small, put together with the evidence from the laboratory experiments, it does seem worth us all making that simple adjustment to when we eat in order to maximise the amount of fat that our bodies burn throughout the day.