From Verona to Athens to Denmark to the Scottish Highlands - the varied locations for William Shakespeare's plays reads like a 17th Century travel guide of far-flung places (although don't expect to find Australia, it had only just been discovered by Europeans in the playwright's lifetime).

To commemorate the 400th anniversary of the Bard's death, Shakespeare's Globe has assembled an all-star cast to make 37 short films - one for each play - and here's the twist: each lavish 10 minute vignette is made on location in the real setting of each plot.

The films have been directed by a selection of young directors and blend existing Shakespeare's Globe footage with new material shot in locations that capture the breadth of the Bard's imagination, including the Pyramids of Dahshur in Egypt, the rocks of Elsinore, Denmark, and the historic Jewish Ghetto of Venice, Italy.

The films were shown on massive screens punctuating Bankside during the anniversary weekend, and will be shown here on Shakespeare Lives during the six month festival. The Complete Walk was the brainchild of the Globe's now former Artistic Director Dominic Dromgoole. Writing in the Telegraph he said of the project:

"To see Peter Capaldi capturing the madness of Titus surrounded by the rubble of antiquity, and Dominic West the scorn of Coriolanus as he looks on modern Rome, provokes questions about time and place and imagination.

Our films also celebrate the flowering of Shakespeare’s imagination on stage and film, but there is something right and just about bringing Shakespeare’s language to the places themselves, and creating something brand new in the confluence of place and poetry."

Each film will be available to watch in full from this page for 1 month followed by an edited version.

Watch a selection of the Complete Walk films (films 32-37)... Much Ado About Nothing, The Comedy of Errors, The Taming of the Shrew, The Winter's Tale, All's Well That Ends Well, As You Like It 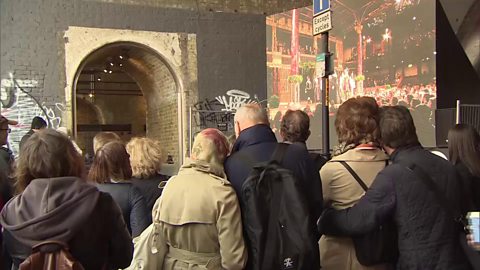