a shark that makes friends

Feeds on bony fish and crustaceans, as well as rays and other sharks.

Inhabits coastal inshore subtropical shallow waters around the U.S to the north and eastern shores of South America, as well as the west coast of Africa

Lemon sharks are viviparous, in that they give birth to live young, so when a pup is born it is already a fully formed miniature shark. The mother will risk stranding herself in shallow waters to get as close as she can to the edge of a mangrove forest to give birth, giving her pups the greatest chance of protection from predators. When she gives birth, the pup instinctively swims in the direction of the mangroves, breaking free of the umbilical cord. With no parental care from its mother, the vulnerable pup is left to its own devices. Like all sharks, these juveniles have to learn to hunt. If they don’t they will starve to death which is often the highest cause of mortality in juvenile sharks. But these flooded mangrove forests form a nursery area for other juvenile lemon sharks. Here they come together and form friendships and learn how to hunt and be a shark. As the juveniles get older, they venture further and further from the safety of the mangroves, until one day, when they are about 7-8 years old, they leave for good. Incredibly female lemon sharks will return to the same mangrove forests that they were born in, to give birth to their own litter of pups! 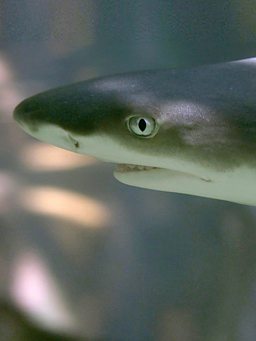