Bronzes were as important to the early Chinese as stone temples and sculptures were to their contemporaries in Egypt, Mesopotamia and Greece. Bronze vessels have had a profound and continuing influence on Chinese art.

For this first episode of ‘The Story of China’, we filmed some of the fabulous bronzes from the Shang, and later periods, in the Compton Verney Chinese Collection in Warwickshire. 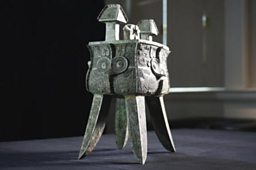 Rich families in Shang China would hold banquets in their family’s ancestral temple, to entertain and ask for help from the spirits of their ancestors. They would use music and dance, as well as food and wine served from bronze vessels.

This fabulous vessel was for wine; it has owls on three sides. Images of wild animals predominate in Shang art, in contrast with the art of the ancient Middle East, where agriculture and people are more common.

The first Chinese state for which clear written records remain - unites much of north central China.

The Ruins of Shang 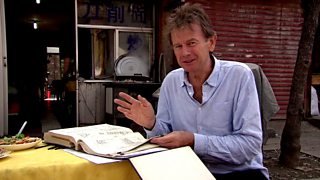 ‘Shangqiu’ can mean ‘Ruins of the Shang’, a tantalising name that helped lead archaeologists to their first city’. 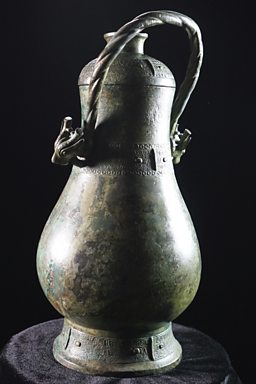 This form of wine vessel was adapted from a simple pottery flask, a design echoed in the twisted rope-like handle. When lifted off the body, the lid could be used as a saucer.

An inscription on the base and lid reveals that ‘Fu made this sacred vessel for Father Gui’. 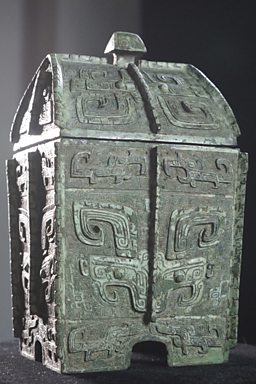 The foot of this container is decorated with two small dragons with hooked tails; above these are large ‘taotie’ monster-masks, repeated on the lid, and below the rim are two further small dragons. 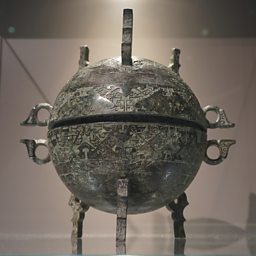 This vessel was made for serving steamed millet or rice, and is made up of two matching halves; the upturned cover has the option of being used as a matching serving vessel. It was made during the Zhou dynasty, which followed the Shang.

"The first dynasties of China, the Shang and the Zhou, made large numbers of fine bronze containers for food, for alcohol, for water, and used these in a big ceremony, sometimes once a week, maybe once every 10 days. The belief is that if food, wine or alcohol is properly prepared, it will be received by the dead and nourish them and those dead, the ancestors, will look after their descendants in return for this nourishment.

"The bronze vessels which we see today were almost all buried in tombs or in hoards. They were prized possessions for use in life. They were not made primarily for burial, but when a major figure of the elite died, it was believed that he would carry on offering ceremonies of food and wine to his ancestors in the afterlife, indeed, entertain them at banquets. They were also buried in large hoards when the state faced great danger. A member of the royal family might own up to 200." This large horse - over a metre high - would have been made for the tomb of an elite Chinese man, so that the horse could pull his chariot in the afterlife.

Horses were rarely used in China for ordinary farm work; they were highly valuable and reserved for military use, or as status symbols. It was difficult to produce such a large bronze in one mould; this stallion was cast in nine close-fitting pieces, which were then joined together. 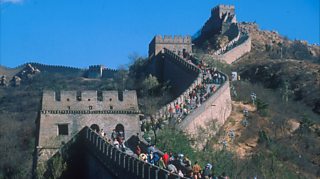 King Ying Zheng of Qin for the first time unites much of the Chinese heartland, becomes the first ruler to use the title "emperor" as Qin Shihuangdi ("First Qin Emperor") and builds first Great Wall of China, but his empire quickly collapses after his death. After a brief period of instability, Liu Bang founds the Han dynasty.

Collapse of Han state results in nearly four centuries of division between competing dynasties before China is reunited by the short-lived Sui dynasty. Start of the development of southern China.

Tang Dynasty unites China for nearly three centuries, in what is seen as the second high point of Chinese civilisation after the Han; imperial sphere of influence reaches Central Asia for the first time.

Song Dynasty: While weaker than the Tang empire militarily and politically, Song rule marks a high point of Chinese classical culture, with a flowering of literature, scientific innovation and the adoption of Neo-Confucianism as the official state ideology.