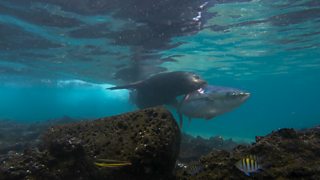 This story came from South American based cameraman Richard Wollocombe who heard it from a fisherman over a drink one evening. At first Richard couldn't believe that a sea lion could drive large oceanic tuna literally out of the water and up onto the rocky shore and we found it difficult to believe too. Nevertheless, we agreed to send local camera assistant, Roby Pepolas, to check it out and sure enough he captured one tuna hunt on video. We were still fairly sceptical, as the footage was very wide and it was unclear what was happening, and we had no idea how often this behaviour was occurring and witnessing it could have been a one-off fluke. There were no scientific records of this behaviour, but it was just too good an opportunity to miss.

The fisherman had observed these sea lions on a remote part of Isabella Island in the Galapagos Islands, a day's sail from the nearest remote port. It took several months of preparation before we could film the sequence, as we had to apply for permits and organise a month's long expedition to camp on the island. The bay itself was pretty hostile, being covered in jagged volcanic rock at the base of an active volcano, with no fresh water, vegetation or infrastructure for dozens of miles in each direction. After two days of travel drone cameraman Dan Beecham and I arrived in the Galapagos where we met Richard and his team. We began the journey to the remote bay equipped with our camping and camera gear plus all the tinned food and fresh water we could manage.

After setting up camp we had our first night under the stars, though I didn't sleep thanks to overly friendly iguanas and pelicans who were very curious of their new neighbours! On the first morning there was a commotion in the bay and sure enough, a sea lion had chased a tuna from the open ocean right into the shallows: we could hardly believe our eyes! It was a huge fish! What a relief that this fisherman's tale had turned out to be true - but the action was so fast it was hard to work out what had just happened. 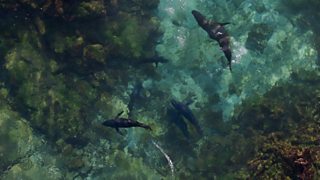 Over the the next few days we gradually began to figure out how on earth we could film this incredible behaviour. Using a very long lens Richard also got to know individual sea lions and their characters. We learnt to watch the horizon near the opening of the bay and when we saw the sea lions porpoising in we knew a hunt was on. Normally there was one sea lion that would instigate the hunt and we could hear them all calling to each other - almost like players on a football field. However, it wasn't until Dan got the drone in the air and we watched the footage back that their game plan became obvious - there was always a driver which was often a younger sea lion we called 'tag boy', with a small yellow tag on his flipper. You'd then see him peel off and block the deepest channel, keeping the fish in the shallows, the other sea lions would then flank the main group of fish and drive them ever shallower.

Over the coming weeks in that remote and beautiful bay we witnessed the hunting behaviour several more times and on a few occasions, a sea lion did cause the tuna to swim straight out of the water and onto dry land! It was wonderful to be the first to film a behaviour that is totally new to science and it only makes us question what more could be out there - still waiting to be discovered.