How to photograph a meteor shower

Photographing meteors isn’t that hard. What’s required is a bit of setup knowledge and a lot of luck. Meteors are statistical events, which means that although you can’t predict where one’s going to occur, you can increase the probability of catching one. 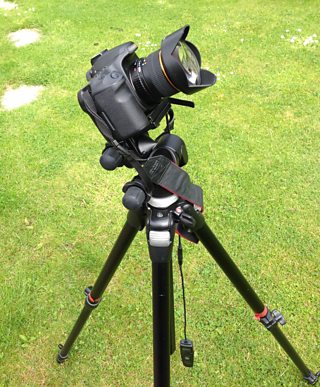 A DSLR camera works best and it’s recommended that this is mounted on a tripod to help you point it at the correct part of sky. The lens to use depends on how lucky you’re feeling. A shorter focal length lens will cover more sky area and increase your chances of catching something. However, meteor trails through a wide-angle lens can look a bit tiny and unimpressive.

If you use too long a focal length lens, a meteor trail may look very impressive if you’re lucky enough to catch one going through the frame, but the chances of this are greatly reduced because the sky area covered will be smaller.

A lens in the range 28-50mm will work well, with the chances of capturing a meteor being lower with the larger value. If you’re using a non-full frame DSLR (as many are) then a magnification factor needs to be applied to your lens focal length. As an example, many DSLRs use APS-C size sensors which have a multiplier of 1.6x. This is because the sensor is smaller than that used in a 35mm full frame camera, which the lenses were originally designed for. A 50mm lens produces images like you’d get through a 50x1.6 = 80mm lens. So for non-full frame cameras, the optimal lens focal length would be in the range 17-32mm.

The lens should be set to manual focus (M or MF) and pre-focused at infinity. If your camera supports Live View focusing, point it at a bright star and carefully focus on the rear screen as accurately as you can.

The f-number of a lens indicates how it’s set for gathering light. A low f-number opens the aperture of the lens wide allowing in lots of light. A high number closes the aperture reducing the amount of light getting in. For meteor photography, open the lens fully by selecting the lowest f-number. If you have a choice of lenses of similar focal lengths, select the one that gives you the lowest f-number.

Set the camera to (M)anual mode and the ISO setting high. If you camera goes up to a top value of say, ISO6400, then select either ISO1600 or ISO3200. If its top value is higher, then ISO6400 or ISO8000 are good values to go for. Go too high and the images may start to appear noisy and washed out.

Set the exposure time to 30s and the camera’s shooting mode to continuous. This is the mode where if you hold the shutter button down, the camera keeps taking shots one after the other. An inexpensive shutter release cable is an essential bit of kit for meteor photography. Check you have the right type of cable for your make and model of camera and plug it in. When you’re outside and ready to take your shots, simply hold the shutter button down on the release cable and lock it in that position. If you’ve set everything up correctly, your camera will keep taking 30s exposures, one after the other.

Take a test 30s image and examine it on the rear screen of your camera. If your skies are light polluted, the image may appear washed out and almost white (or orange!). If this is the case, then shorten the exposure time. Try to avoid going below 10s.

It’s a good idea to change the file type you camera stores to ‘large JPEG’. If you normally have your camera set to take RAW images, you’ll soon fill up your camera’s storage card. Several cards are useful too. With one in the camera, swap it out after say an hour of shooting, replacing it with an empty one. This way you shouldn’t run out of space as long as the cards can hold 120 images. Remember to have plenty of charged batteries on hand too if you can. The cooler temperatures at night can cause the batteries to drain quickly.

Point the camera up at an angle of about 60 degrees to the horizon – that’s about two-thirds of the way up the sky. This doesn’t have to be very precise. Any direction around the sky will do, but avoid shots where large areas are hidden behind objects such as buildings or trees. If you’re lucky enough to get a beautiful meteor streaming across the top of a large tree that obscures half your camera’s field of view, then that’s a bonus. However, the most likely thing that will happen is that a meteor will either occur behind the tree, or be partly cut off by it! If your camera is just looking at sky, then your chances of catching a meteor are maximised.

A good idea is to put the radiant in the shot but push it close to the side of the frame. In this way you can identify if any of the meteors you’ve caught are Perseids and also see how they appear to radiate from the radiant position.

Once you’re set up, lock the shutter button down on the remote shutter release cable, sit back and enjoy the show with your own eyes. Monitor the state of the lens with a torch every 20 minutes or so. In a cool, damp August night, lenses have a habit of fogging over. A 12V camping hairdryer attached to a suitable battery is a good way to gently warm the front of the lens to remove any moisture that has appeared.

Once the night is over, get some sleep and after that download all the shots to a computer. Carefully work through each one in turn looking for meteor trails. There will be lots of satellite trails and aircraft lights, but if you’re very lucky, you may also catch a spectacular Perseid meteor!