The miniature camera crew who captured our hearts 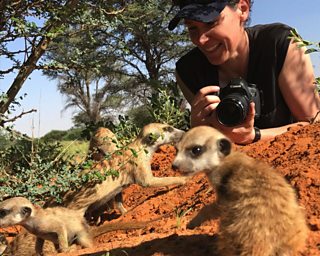 It’s a call from BBC Series Producer Dan Rees; "Anne we’re wondering if you’d like to direct ANOTHER film about meerkats?"

I quietly think to myself I love meerkats, but NO, not a snowball’s hope in hell. Having made 3 series of Meerkat Manor, a 3D Meerkats film AND a Meerkat Movie voiced by Whoopi Goldberg, I was good for meerkats films so I reply

BBC: "We’ll give THEM the cameras and THEY will film their story."

I arrived in South Africa with 3 mini-meerkat cams and some serious doubts – would we get the cameras on, would they work and would we get a single usable frame? 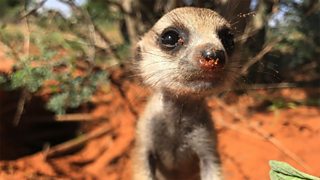 Prior to filming, it had been a truly terrible 12 months for wildlife in the Kalahari. The summer rains had not come and the desert was in serious drought. The scientists had lost 50% of their Meerkat population. It was devastating to return and realise the species that had profoundly changed my life, might be on the way out.

Less than 12 hours in and the heavens open up. More rain fell that first day than the desert has seen in an entire year! With the rain came relief and our work began. I spent the next 10 days prepping before the rest of my human crew arrived. With the help of project manager Laura Meldum and Professor Marta Manser, we set about the impossible task.

Our first job was to find the best mini camera crew candidates. If we chose wisely and Chris’s technology survived one of the most unforgiving environments you can film in – we might just capture a side of meerkat life scientist know virtually nothing about – their secret life below ground.

Casting for our camera crew

As ANIMAL WELFARE was of paramount importance – all meerkat staffing had to be entirely voluntary. Incentives were offered to willing candidates in the form of meerkat treats - tiny bits of boiled eggs and sips of water. Just like us, meerkats have individual personalities, some are super relaxed, while others like to keep to themselves. 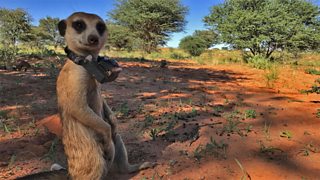 It was clear early on who might be up for the gig – a lively teenager called “Fat-boy”. He was easily the most playful meerkat, but would he help us with our ultimate goal – filming newborn pups below ground? His youthful curiosity might take him into the burrow to greet the new arrivals, but as a sub-adult there was no guarantees he would do anything other than muck about. And he certainly did that!

What we needed was a safe bet, a mature member of the group, with babysitting responsibilities. Fatboy’s big sister “Eve” was the obvious choice – she’s the eldest female in the group and although she has an uneasy relationship with the mother of the group – she was the most likely individual to help babysit when the next litter of pups arrived.

Despite it being Gordon’s first experience with wild meerkats, he was an absolute natural around them. Intuitively, he knew what it takes others weeks to learn; while the Meerkats in the Kalahari appear tame, they are anything but… one false move or a misplaced step and they bolt below ground. 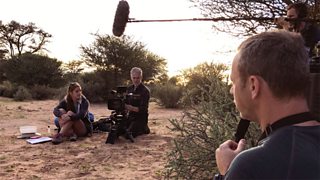 Gordon’s near 30 years of wildlife filmmaking gives him a lightness of touch and intuition around animals that enables him to creep closer than most. Gordon’s impromptu “meerkat interview” was one of the funniest things I’ve filmed in a while – all credit to cameraman Simon Reay - who beautifully filmed so much of this story - for containing his laughter just long enough to capture the moment perfectly.

Lights, Camera & Collar in just 25g? You’ve got to be kidding me!

Many stars had to align to make this shoot a success, and without the hard work of more than 300 meerkat scientists over the last 25 years and the support of researchers on the ground, none this would have been possible. But on top of that, this truly was a mammoth technical challenge that required months of camera development and hundreds of hours in the field. 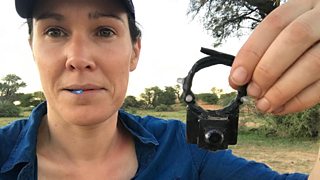 Without the technological wizardry of Chris Watts and persistence of BBC researcher & rising star Isabel Rogers – we simply could not have captured what we did.

It was very much an evolving process – with the meerkats guiding us. Each day that we observed their behaviour we found new ways to improve the camera design, and every evening, long after we had finished in the field, Chris worked through the night like an over-caffeinated elf to bring me a brand new improved camera in the morning.

We had to adapt when we hit our first little speedbump: apparently the sound of the Velcro collars coming off, it was like nails on a chalkboard for meerkats but Chris immediately silenced the problem with magnets. How he shrunk his 3D printed camera casing and packed in a camera board, battery, lens and LED lights all weighing around 25g is frankly some sort of voodoo. Put simply, before Chris started, an infrared collar camera weighing less than 5% of a meerkat did NOT exist. And without the boundless patience of our researcher Isabel who I kindly left in the desert waiting until a female to give birth – we would not have had such valuable footage to share with the scientists.

But of course - the ultimate credit goes to the undisputed stars of the shows. It was the meerkats who brought us into their world. They shared some of the most beautiful and intimate meerkat behaviour I’ve ever seen, and they captured the first images and sounds of wild new-born pups below ground. These are their home videos. Speaking as the director, what more could I ask for from my crew? They may have be first timers but I think they did a pretty fantastic job.